Preachers vs Protesters: Conflicting beliefs lead to debates on campus 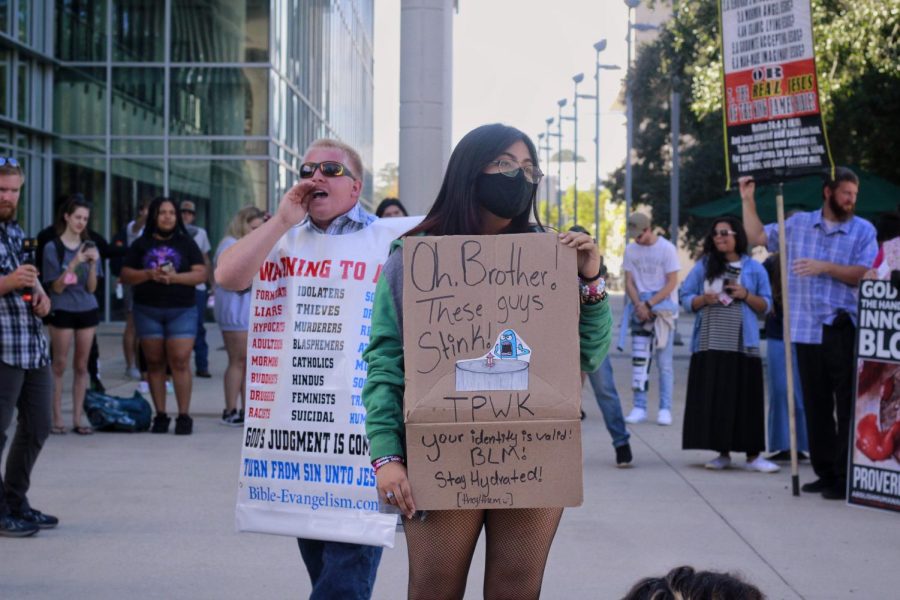 A student steps in front of Consuming Fire preacher holding a "Treat People With Kindness" cardboard sign outside of the Student Union.

Preachers from Consuming Fire Fellowship arrived on campus to share their beliefs with the student body on Tuesday, Oct. 26.

The group, which has been a frequent visitor on campus, was met with large protests and debates on whether or not what they were preaching was the best thing for students.

The fellowship has been operating since 1995; they have been preaching by open-air evangelism for over 25 years. Its main base of operations is a church in Woodville, Miss., and the group is dedicated to spreading its theology in multiple states.

“Our main purpose in preaching is to glorify the Lord. We don’t look at the response of the wicked and base our success on it, we come here to bring God glory by having our presence,” said Brandy Stockstill, one of the women of Consuming Fire.

The fellowship stood outside the Student Union holding signs warning a whole laundry list of groups to follow the doctrine and repent or risk being sent to hell. Anyone who does not follow the Bible’s beliefs would be condemned to hell, and needed to repent before it was too late.

While Consuming Fire was on campus for nearly three hours, the response to their presence was quick. Within the first hour, a group of students began to flock around the preachers to share their own beliefs on why the preachers were wrong and should be more accepting.

Several students had their own opinions to share about preachers coming to campus.

“I think it’s crazy. To see stuff like this is sickening,” said freshman Ashton Williams. “Saying their opinions is okay, but I think they take things too far. It’s crazy to think people like this actually exist.”

“I don’t want to pay to come to college if people like this are going to be speaking,” said another student who wished to remain anonymous.

UPD officers were present at the event, on standby in case any physical actions began to take place.

The fellowship left campus once students began to loudly chant “God Loves All,” drowning the preachers out so no one could hear them. Cheers rang out as they left, and the crowds dispersed as students returned to their lives on campus.