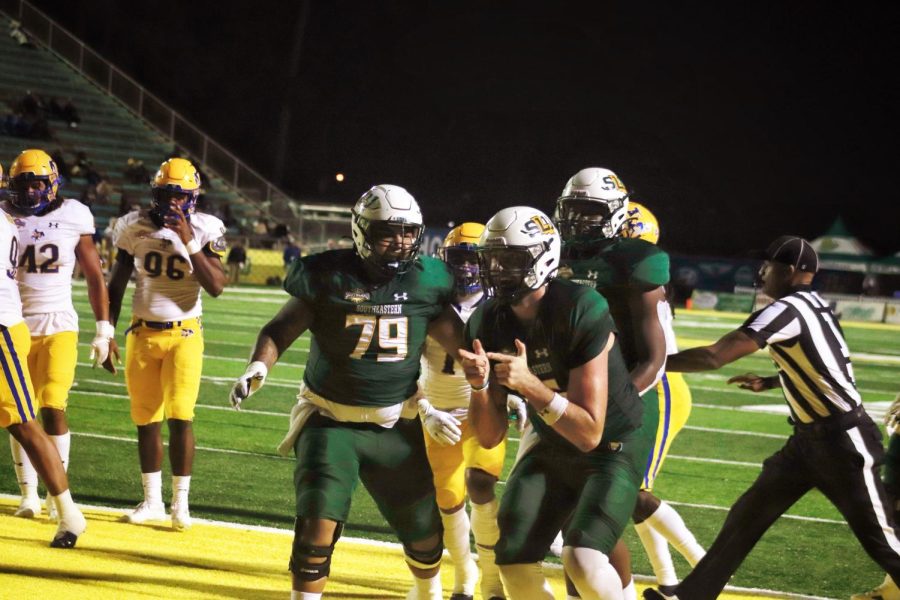 SLU quarterback Cole Kelley and his teammates celebrate after scoring a touchdown against the Cowboys on Saturday night.

Lions football now has six wins under its belt after defeating the McNeese Cowboys 23-20 last night in Strawberry Stadium.

The 38th edition of this in-state rivalry game did not disappoint. Southeastern entered the game with a record of (6-1) while being ranked 8th in the FCS polls. McNeese was 3-4 walking into Strawberry Stadium last night, but had won its last two games including the latest one being an upset of Incarnate Word on the road.

The first meeting of the season between these two ball clubs took place in Lake Charles on Oct. 2 resulting in a 38-35 victory for SLU. Much like the initial matchup, the game in Hammond lived up to the billing.

There was a buzz around the stadium before the opening kickoff as people began to realize Coach O. was in attendance for the game to cheer on his son Cody Orgeron, the starting quarterback for McNeese State.

Kelley and co. responded with a 70-yard drive of their own which stalled out in the red zone resulting in a Mateo Rengifo 29-yard field goal. After the first two series of the game the scoreboard read 7-3 McNeese.

The Cowboys drove down all the way to the Lion’s one yard line before a false start penalty pushed them back. They would eventually have to settle for a field goal which was missed by kicker Christian Donnelly from 21 yards out.

With less than 30 seconds remaining in the first quarter, Kelley was picked off by linebacker Kordell Williams who returned the ball inside the SLU 10 yard line, setting up first and goal. Southeastern’s defense stood tall forcing a goal line stand, stopping Orgeron at the 1 on fourth and goal.

The Lions took it from their one-yard line all the way into Cowboy territory, but was stopped short on fourth down from the McNeese 40-yard line. At the half, the score remained 7-3.

On this drive came the play of the game for Southeastern. Orgeron had gotten the Cowboys knocking on the door of a two-score lead at the Lion’s one yard line when Zy Alexander came up with a game changing interception.

“We were in man coverage and they ran the same play earlier and got us. So this time we went to the drawing board and coach told me and the corner to switch. I baited him and when the quarterback threw it, I attacked the ball,” said the redshirt freshman defensive back. It was his fourth INT of the season in a spot where the defense desperately needed a play.

Later in the third quarter with a 1:14 remaining, SLU finished off a 12 play 77-yard drive with a one-yard scoring toss from Kelley to Damien Dawson on fourth and goal giving the Lions their first lead of the game, 10-7.

With a slim three-point lead heading into the fourth, Southeastern’s star Cole Kelley finally showed up. The Walter Payton Award winner completed a 77-yard bomb to the speedy Austin Mitchell putting Southeastern up 16-7.

This set up the offense at the McNeese 21-yard line. From there it only took SLU four plays to punch it in the end zone via a one-yard Cole Kelley plunge putting Southeastern up 23-7.

McNeese would score two late touchdowns to make the score 23-20 and attempted an unsuccessful onside kick, which was recovered by the Lions. Kelley took a knee and that was all she wrote.

In a season where the offense has been the catalyst for the team, the defense stepped up and showed their teeth.

“Now we’re becoming a championship football team. Early in the year our defense played well in spurts but our offense was dominating. We didn’t have it tonight offensively but our defense did and when your team starts coming around you see the mold start happening to where we’ve become an entire team,” said Coach Scelfo. He also noted the play of special teams coming up with a turnover and punter Austin Dunlap constantly pinning McNeese deep in their own territory all night long as significant contributions.

Southeastern moves to 7-1 on the year and travels to San Antonio next Saturday to face 6-2 Incarnate Word in a battle that will likely decide the Southland. Kickoff is for 2 p.m. and the game will air on ESPN3.