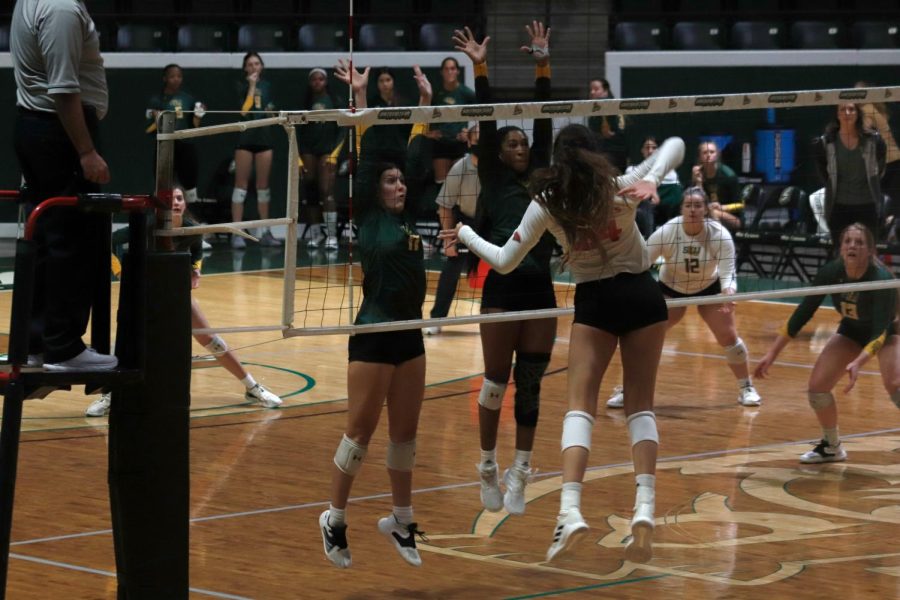 Juniors Jolie Hidalgo (left) and Crispin Adams reach to block a hit from the University of Incarnate Word Cardinals at the Nov. 6 home game.

On Nov. 6, the Lady Lions volleyball team played the University of Incarnate Word in the University Center. The ladies lost with a close score of 2-3.

Throughout all five sets, the teams went head to head. During the fourth set, the Lady Lions let their guard down after winning two sets and were close to winning the third. Just as they let down their guards, the Cardinals started to up their game.

“I just think we need to stay a little bit more focused as the game gets tighter towards the end. We do have a tendency to almost lose focus,” said junior middle blocker Crispin Adams.

Adams said she feels like the team sometimes gets lost in winning.

“Sometimes we’ll think, ‘Oh they’ll just give us the points,’ but no; we need to take our points and earn them. We need to step on the gas no matter what and always push to finish,” Adams said.

Head Coach Jeremy White said he felt as though the team gave their opponents many free and easy points by not playing defensively.

“I think we let a lot of easy balls hit the floor, that we kind of looked at each other for somebody else to play defense. We gave them a lot of easy points that could’ve been easily stopped,” White said.

Because of this setback, White plans to have the team practice more on defense.

“Hopefully we can get back in the gym this next week and fix our mistakes,” White said.

The Lady Lions will have until Nov. 11 to practice for their upcoming game against Northwestern State at 6:30 p.m. in the University Center.