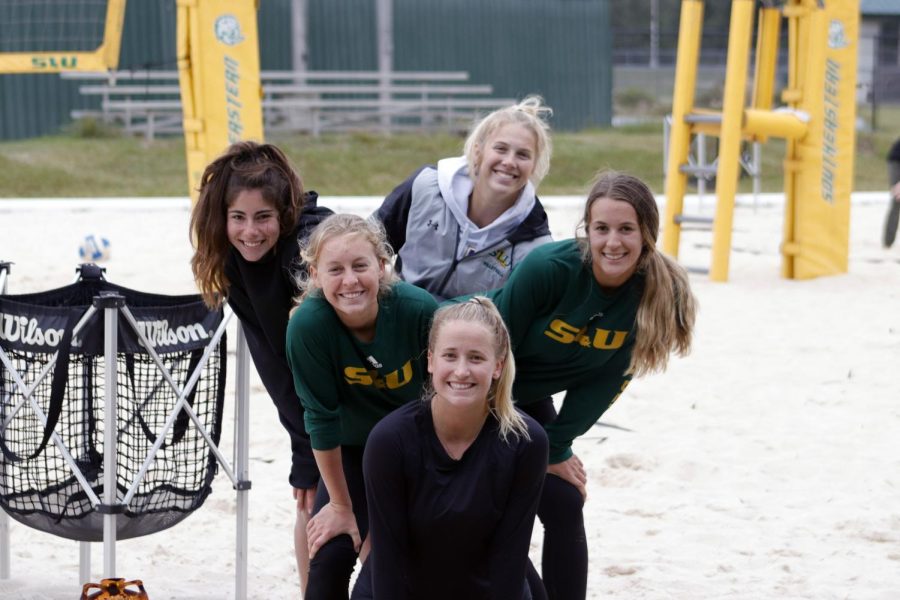 Beach Volleyball players pose for photo at practice. The ladies are ready to take UNO in the season opener on Nov. 11.

The Lady Lions will take the sand in their second full season of beach volleyball on Thursday, Nov. 11. The spring of 2020 was supposed to be the inaugural season, but it came to a halt due to the pandemic.

Last year, the team finished with a record of 3-19 which was marred somewhat due to having to forfeit a fifth set in some of their games. This will not be the case this year as fall sports returned in the fall as opposed to the spring in 2021 due to COVID complications.

Head Coach Jeremy White said he is looking forward to the future of his new program.

He said, “Beach volleyball is the fastest growing sport in college right now. It’s also the fastest sport in the history of the NCAA to add a championship. To be a part of that experience in Louisiana where the volleyball community is heavily based around Beach Volleyball is pretty exciting for us.”

The team will look to break in their new complex for the very first time this season as last year the only scheduled home game was canceled. The Hammond Beach Volleyball Complex was built in 2020 and is located at North Oak Park near the softball field.

“It’s nice to have a brand-new facility where we have lighting. We have expectations of continued growth within the facility. The fact that the university went out and put that together for us right away… whereas a lot of programs start off in privately owned complexes rather than having their own facility so it’s exciting for us,” White said.

On the sand, the ladies will look to improve upon last year’s record as they only lost two players from last season, Marisa Calvaruso and Mikayla Richard who both graduated in the spring. SLU returns eight players, five of which also play on the indoor team: Linsey Sackett, Nyslissa Snagg, Eryn Wilks, Ariana Hebert and Jolie Hidalgo.

Hannah Brewer, Hannah Haerer and Lexi Gonzalez will play both indoor and beach volleyball, rounding off the first year players.

The Lady Lions will have their top returning duo in seniors Hannah Barosh and Michelle Mirarchi. The pair combined for an 8-14 record in the spring of 2021 primarily playing in the second flight. Meagan Scuderi was a part of Southeastern’s first flight pair last season going 6-16 with Mikayla Richard. However, with Richard already graduated, Scuderi will be looking for a new partner in 2022.

“Having a lot of freshmen, they come in and it’s pretty nerve-racking. We all take them under our wing and they help us out just as much as we help them. They come in with a lot of knowledge. We’re able to bounce things off of each other and everyone’s super receptive. We have really good teamwork,” said Michelle Mirarchi on having a leadership role on the team.

Mirarchi and Hannah Barosh both take pride in being a part of beach volleyball’s second-ever graduating class at Southeastern as the program looks to build continuity.

These two fifth-year seniors say the expectation for this season is to win conference.

Play officially gets underway Thursday, Nov. 11 as the Lady Lions take on the UNO Privateers at home at 4 p.m.