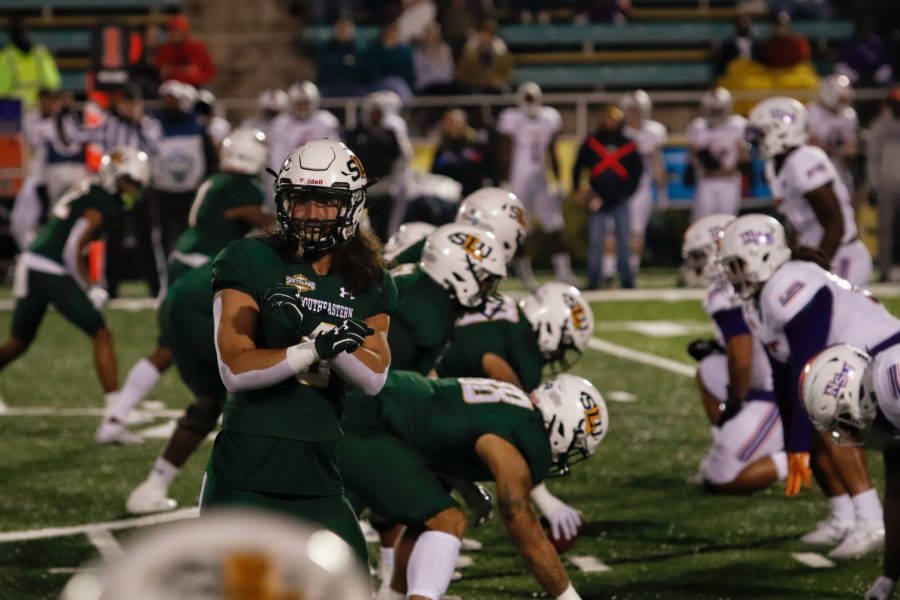 Heading into battle with Northwestern State on Saturday night, Southeastern ranked No. 14 in the Stats Perform FCS Top 25 and carried a 7-2 record.

The game went about as the records suggested, with SLU defeating the 2-7 Demons 56-28.

The Lions started fast and never looked back. A 39-yard Cole Kelley touchdown strike to Anthony Spurlock initiated the weekly Southeastern offensive explosion. However, Northwestern State would give the Lions defense an early scare.

Northwestern Coach Brad Laird decided to roll the dice on his team’s first drive of the ball game going for it on fourth and 18 from the SLU 24.

The risk would not pay off as freshman defensive back Zy Alexander skied in the end zone to make a fantastic one-handed interception, his sixth of the year, returning it out to the 20 yard line.

“I don’t go into the game thinking about getting a pick. I just go in the game and do my job. I was playing short hoping he would go deep and I just went up and made a play,”  Alexander said.

The Southeastern offense wasted no time, as Cole Kelley ran in his 13th rushing touchdown of the season, capping off a nine play 80-yard drive. The scoreboard read 14-0 Lions after the first quarter of play.

A Demon punt would lead to another Lions touchdown. This time taking them just two plays to go 81 yards as Kelley tossed a 38-yard scoring strike to Gage Larvadain. After three possessions, Southeastern had a commanding 21-0 lead.

Northwestern State answered back with a 84-yard drive finished off by Kaleb Fletcher’s touchdown.

Later in the second quarter, SLU’s Ivan Drobocky came up with an impact play on special teams blocking the Demon’s punt, giving his offense the ball at the NSU 40-yard line.

It took the Lions just three plays to punch the ball in the end zone courtesy of Taron Jones from one yard out.

After another Northwestern State three and out, Southeastern would score it’s fifth touchdown of the first half via Cole Kelley’s nine-yard pass to Anthony Spurlock in the end zone with just four seconds remaining in the first half.

“The last two times we played Northwestern they did a really good job against us in the first half. We wanted to get out quick on them and we didn’t let them stick around for long. I think the first half was indicative of who we can be. We played well in all three phases,” said Head Coach Scelfo on his team’s first half performance.

In the second half, both teams scored 21 points as the Lions let their foot off the gas a bit with the game already out of reach at halftime. Backup quarterbacks Cephus Johnson lll and Eli Sawyer got some playing time after Kelley exited the game following a seven play 75-yard scoring drive on SLU’s first possession of the second half. Senior running back Damien Dawson capped the drive taking Kelley’s screen pass 35 yards to the house.

The Lions would go on to win by a final score of 56-28 over the Demons. Cole Kelley finished the contest with 363 passing yards on just 22 pass attempts completing 19 of them while adding five total touchdowns – one on the ground and four through the air.

With second-leading wideout CJ Turner still out with an injury, the rest of Southeastern’s receiving core stepped up to help out their number one Austin Mitchell.

“We hit some different guys on some big plays. Different people catching balls downfield. I’ve said that from the beginning, we have playmakers. We know that but the public doesn’t know that. When we get the ball in their hands you see what happens,” Scelfo said.

Southeastern has no time to rest on its laurels with Nicholls State coming to town next week for the River Bell Classic.

The Lions will host Nicholls State at 6 p.m. on Thursday, Nov. 18 at Strawberry Stadium in the regular season finale.