Mobile camera trailer installed outside Union due to safety concerns 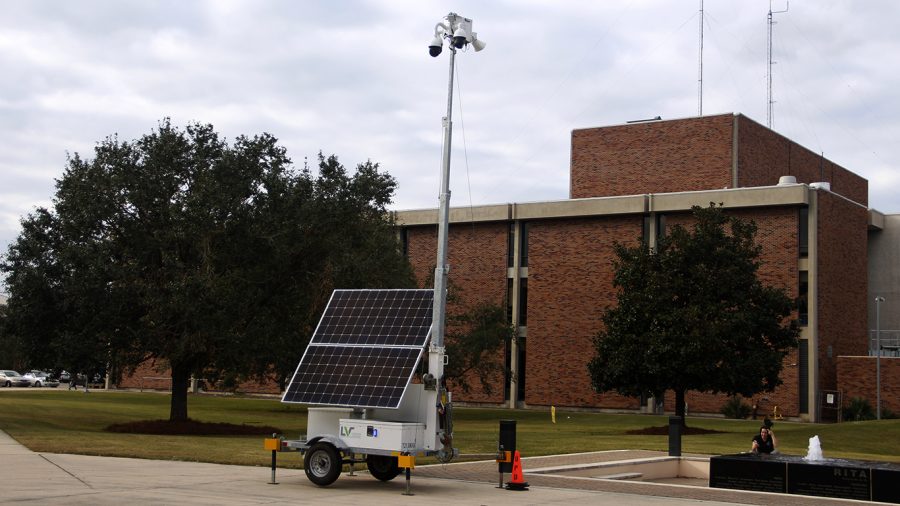 A new solar mobile camera device has been placed outside of the Katrina Memorial Fountain amidst increased concerns regarding Christian preachers on campus.

A new security device has been installed near the Katrina Memorial Fountain amidst allegations of physical assault incidents involving preachers on campus.

The device, known as a Solar Powered Mobile Security Cart, was installed by the university as part of an ongoing effort to increase security on campus.

This installation comes after an increase of protests from students during visits from Consuming Fire Fellowship and other groups of Christian preachers who congregate outside of the Student Union near the Katrina Memorial Fountain.

Chief Michael Beckner, Director of University Police, explained that the device is currently installed as a test of the system for potential use around campus.

“The University is testing out the system as part of our ongoing efforts to make our community safer. We are able to deploy a device like the mobile camera trailer to areas that are needed, such as tailgating, large events, and yes, areas that pose a threat of an incident happening,” Beckner said.

Beckner also shared that the University Police Department will be requesting similar technology from the university in order to further increase security measures in other areas of concern around campus.

“We hope to put forward a budget request in the near future to bring technology like this to the campus as it benefits our whole Southeastern community,” Beckner explained.