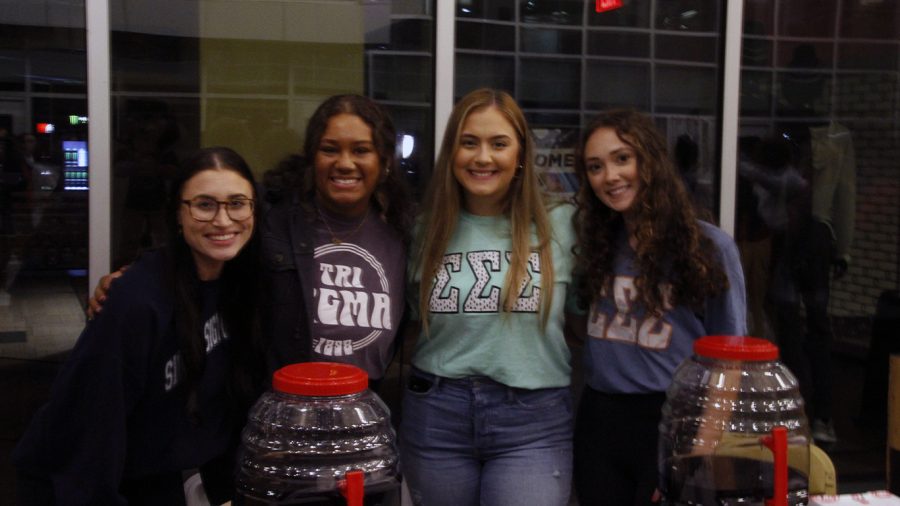 Members of Tri Sigma pose during the Mocktails event. Dan Schneider, an activist and retired pharmacist, also presented at the event.

On Nov. 12, Dan Schneider, an activist and retired pharmacist, came to SLU to educate on drug addiction and the opioid epidemic.

Schneider, who appeared on the Netflix documentary “The Pharmacist” appeared as a guest to speak to students as a part of the Mocktails event in the Student Union Ballroom.

Schneider began his goal as an activist after his son, Danny, was killed while trying to buy crack on April 14, 1999. After receiving this news, Schneider started to search for the person who killed Danny. Later on, he begins to challenge the opioid crisis in medicine, along with drug abuse.

“At the time, the crack epidemic was starting to recede and what really picked up were the opioids and young kids were coming into my pharmacy with high power opioids and were dying. It was a different group of people; not regular drug addicts, but young kids that were taking pills,” Schneider said.

The lecture in the ballroom was followed by a cocktail tabling underneath the breezeway by the Student Union. The theme for the tabling event was “What’s Your Potion?” and campus organizations, fraternities and sororities joined in with twisted fairytale booths serving themed drinks.

For some students, including junior Laken Goldsby, going to the lecture was a personal and emotional experience. “I’m honestly really happy that we got this opportunity to be here because this story personally touched me because I lost someone to a Fentanyl overdose and I had to hold back tears a lot during this,” Goldsby said.

After the lecture, Brad Peterson, a paramedic and Alesia Ballek Wahl, a professional counselor for the Volunteers of America’s Northshore Opioid Mobile Response Team, came to the lecture and provided services, contact information and boxes of Narcan spray for anyone who was interested.

“We have a fully new team that is very motivated and passionate about helping people, so our ability to help and get out to the community has drastically improved. We have been able to help triple the number of people in the past few months than in the past year,” Wahl said.

This event helped to both educate the community in preventing any more deaths, as well as entertain with creatively themed drinks. If you or anyone you know is struggling with addiction and is seeking help, you can contact OMRT by calling 800-844-4925 or emailing at [email protected]