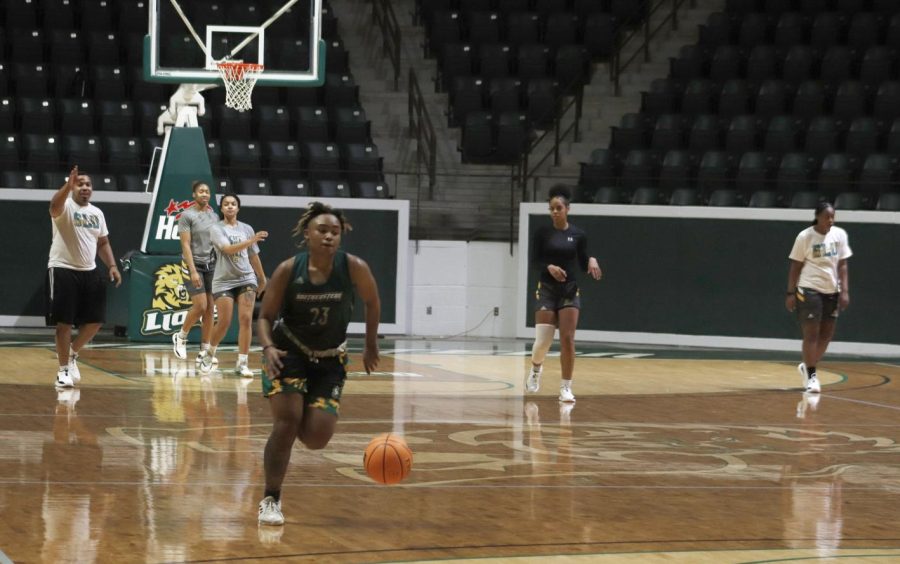 Senior guard/forward Morgan Carrier dribbles the ball up court on a fast break at practice.

Southeastern’s women’s basketball team is off to a start that many may have predicted through three games this season. They lost to FBS opponents Tulane and Texas Tech while hammering LSU-Shreveport.

Nine non-conference opponents remain on the schedule before the turn of the calendar year with the last one scheduled for Dec. 29. Some notable matchups are against ULL, Utah State, TCU, at Stephen F. Austin and Houston.

“We find teams such as Tulane, Texas Tech, Houston or TCU that are bigger than us what they call Power Five schools and we try to go out and play those because if we’re playing tougher opponents, it gives us more of a challenge,” said Head Coach Ayla Guzzardo.

Guzzardo also noted the benefit of playing out-of-conference road games with one-day turnarounds as prep for when the Southland Conference slate rolls around.

Northwestern State is Southeastern’s home conference opener, which will honor the legendary Pat Summitt for her foundation’s work on Alzheimer’s awareness. A slew of games against familiar foes will ensue against the likes of UNO, Nicholls, Texas A&M Corpus Christi, UIW, McNeese and Houston Baptist.

Every conference opponent will be played twice home and away. When they face Nicholls on Feb. 26, it will be Senior Night for the Lady Lions, which is their last home game. The following weekend will wrap up the regular season conquest as Southeastern will travel to Natchitoches to face off against the Lady Demons ending conference play against the same team they started.

However, this SLU squad is eyeing more than just a good regular season showing.

“We want to accomplish getting first place for conference and making it farther than we did last year by winning the conference tournament so we can get two rings. Then we plan on going to the NCAA tournament,” said junior guard Chrissy Brown.

Her head coach reiterated this statement of the season’s expectations, even taking it a step further.

The winner of the Southland Conference tournament receives an automatic bid to March Madness.

Last season, the Lady Lions struggled early but really found their stride late, winning eight of their final ten games before getting bounced in the semifinals of the conference tourney by Sam Houston State. They finished with an overall record of 11-8 and posted an impressive 10-5 record in conference.

Both of these statistics are the best in school history since the 2008-09 season. Women’s basketball is on an encouraging trajectory under their now fifth-year head coach Guzzardo. Seemingly getting better every year since her first full season as head coach in 2017-18, Southeastern has kept improving each campaign finishing a program-best second place in the 2020-21 regular season Southland Conference standings.

“This school has a lot of different reasons why it can be successful. We’re given everything we need to succeed in this conference and this area. We’re recruiting well, our campus and arena are nice,” continued Guzzardo, also pointing to the work ethic of her players as the main reason for their recent success.

The Lady Lions will hit the road and head east to the Magnolia state for their next game of the season as they take on Alcorn State on Nov. 19. Tip-off will be at 6 p.m.