Lions cruise past FAMU in first round of FCS Playoffs 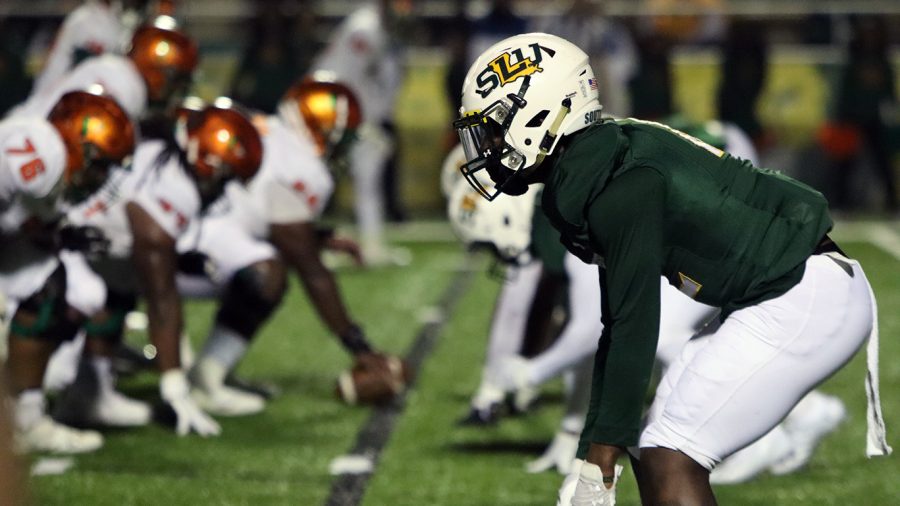 Southeastern (8-3) made it look easy in their 38-14 defeat of Florida A&M (9-2) on Saturday night in the team’s return to the postseason.

The special teams unit, coached by Ross Jenkins, made the first big impact on the game with just under five minutes to go in the first quarter. Nick Kovacs ran in a fake field goal from 21 yards out for the contest’s first points.

Kovacs serves as the teams’ holder. He also plays tight end for the Lions and has 25 catches for 311 yards and four touchdowns receiving on the year. The score remained 7-0 after one quarter of play.

Southeastern’s defense forced a FAMU punt, and Jose Romo-Marinez delivered with a 56-yard boomer, downing SLU at their own two-yard line.

Cole Kelley and co. responded to the challenge by going on a 13 play, 98-yard drive capped by a six-yard touchdown pass from Kelley to the Lions’ other tight end, Nolan Givan.

The Rattlers’ ensuing possession ended in a turnover as Lions’ redshirt freshman defensive back Jack Henderson picked off quarterback Rasean McKay’s pass near midfield, returning it to FAMU’s 41-yard line. It was Henderson’s second INT of the season.

From there, it took SLU’s offense just six plays to find pay dirt, as Kelley made an impromptu play, which led to him finding running back Taron Jones on a shovel pass for a nine-yard score. This extended the Lions’ lead to 21-0 after Mateo Rengifo tacked on the PAT.

Following a three and out forced by the stingy Southeastern defense, Rengifo would get another chance to add points to the board. However, he could not capitalize, missing from 37 yards out after the offense had driven 45 yards to set up the field goal attempt.

Florida A&M’s defense forced a turnover following another three and out from the offense, coming up with a clutch interception to give its team some life for the time being.

Senior safety Antwan Collier made a great break on a slant pattern, picking off Kelley who threw just his seventh interception of the season on 502 attempts.

Failing to capitalize on the opportunity, the Rattlers were forced into a three and out for the third consecutive time. Punter Romo-Marinez got off another beauty of 50 yards again, downing the Lions deep in their own territory, this time at the seven-yard line.

SLU’s number one scoring offense then went on an 89-yard march, getting inside the FAMU five before running out of time in the half. This set Rengifo up for a 21-yard chip shot field goal.

Rengifo’s kick was good and Southeastern went into halftime with a 24-0 lead.

The second half was much of the same as Kelley tossed two more touchdowns to Kovacs and Jones, both tallying their second scores of the contest as the light rain continued to fall in the Hammond sky.

“That’s an NFL catch in my opinion. In the red zone, it’s tight windows. I put the ball where it needed to be and he made a great play. Great game for him tonight,” said Kelley, Walter Payton Award winner.

The first score of the second half was set up by another gutsy special teams call. Head coach Frank Scelfo elected to fake a punt on fourth and four from his own 41 after FAMU roughed the kicker on the previous play, moving the Lions five yards closer to a first down.

Givan, who caught a touchdown in the first half, took the snap and ran for seven yards to move the sticks. He joined fellow tight end Kovacs in making a key special teams play as well as catching a receiving touchdown for SLU.

Kelley finished the contest with four touchdowns, 345 yards passing and one interception before being pulled early in the final quarter for backup quarterback/wide receiver Cephus Johnson III.

Just over a minute into the fourth, the Lions had built a commanding 38-0 lead. The Rattlers would finally get on the scoreboard with 5:30 to go via McKay’s 23-yard touchdown pass to leading receiver Xavier Smith.

FAMU scored again with 10 seconds remaining, as McKay also found junior wideout David Manigo for six. But, it was too little, too late; the clock ticked zero with SLU securing a dominant 38-14 victory.

“I’m really happy with the win tonight. We challenged our team after the loss to Nicholls last game, especially our defensive front. We told them to play a better, more physical brand of football, and we did that,” said Scelfo.

Kelley was not satisfied with the win and said he believes his offense could’ve played even better, lamenting missed red zone opportunities despite the large margin of victory.

SLU will need to be sharp next week as they face third-seeded James Madison University on the road in Virginia for a second-round playoff matchup. Kickoff is for 1 p.m. this Saturday, Dec. 4.

“There’s 16 teams left in the country. That’s it. We’re one of them. That speaks volumes and is good, but we want to go further,” concluded Scelfo.