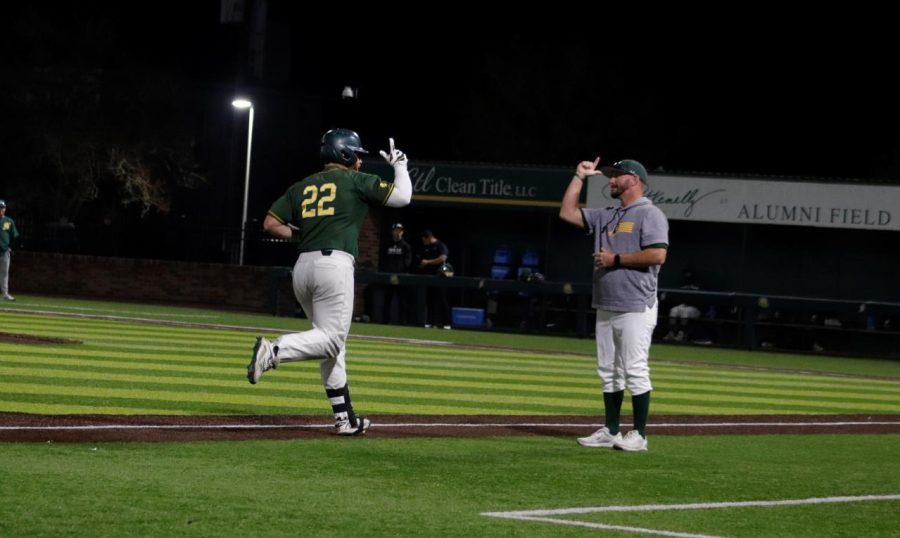 #22 Preston Faulkner gives Head Baseball Coach Matt Riser a "Lion Up" while rounding third base after smashing a home run in Game three of the Heart of a Lion series.

Southeastern baseball completed the third game of their annual intrasquad series on Nov. 9 at Alumni Field. This year’s edition featured the Mamou Mambas versus the Yellow Hammers.

Mamou, La. is the hometown of the late Kaleb Manuel. The former Southeastern standout player and coach tragically passed away in September after his long battle with cancer at 30 years old.

The teams were picked by senior captains and split up as evenly as possible.

Game one went the way of the Mamou Mambas 3-1 the first night at Alumni Field. After a scoreless first three innings, the Mambas struck in the bottom of the fourth via Joe Delaney’s two-run RBI double, driving home Pierce Leavengood and Ethan Butler. Leavengood reached second base on a double of his own and then advanced to third base on a sac fly. Will Kinzeler walked Butler, putting runners at the corners with two outs when Delaney came up to bat.

The Yellow Hammers responded immediately in the top of the fifth. Nick Ray’s leadoff walk proved costly for the Mambas, as he reached second from a fielder’s choice and then swiped third on a steal. Connor Manola took advantage with a clutch two-out single to get the Hammers on the board.

The Mambas would later add an insurance run in the bottom of the eighth as Michael Curry hit an RBI single into right field, allowing Trey Harrington to score. He led off the inning after he was hit by a pitch.

Hayden Robb impressed on the mound for the Mambas pitching 4.1 innings and giving up zero runs on just two hits and recording seven strikeouts.

Game two saw the three-game series evened at one apiece as the Yellow Hammers bounced back with an emphatic 9-4 win the following night.

Leadoff batter Rhett Rosevear finished with three runs scored along with a single and a walk. Bryce Grizzaffi and Nick Ray rounded off the top performers for the Hammers.

Grizzaffi hit two singles, a double, and had an RBI. He also crossed home plate twice himself. Ray had a double and solo homer.

Tyler Finke hit two singles and a double in the loss for the Mambas.

The Hammer’s triumph in game two set up for a dramatic game three played on Tuesday night. The rubber match provided fans in attendance with game-like entertainment.

It was the Mamou Mambas who emerged victorious, finishing the Heart of a Lion series with a 6-3 win. TJ Salvaggio’s grand slam in the bottom of the second proved vital. The freshman crushed the ball over the scoreboard in left field, putting the Mambas up 4-2 at the time.

“There was a mound visit right before I came up. I’ve been playing baseball a long time. Usually that first pitch is a fastball right off the mound visit, so I was just sitting first-pitch fastball and elevated it,” Salvaggio said.

Another freshman, Andrew Yuratich, had a nice outing on the mound giving up zero hits on 2.1 innings pitched and striking out five of the seven batters he faced, noting his curveball as the difference-making pitch.

Riser was satisfied with the production of his freshmen but lamented errors on defense as well as execution on offense as areas of improvement for his team.

“I’ll give the fall a B. There were positives and negatives. The next two months will be a separator to leave some teams behind. We need to be in mid-season form before the season starts,” Riser said.

The Lions will take on Southern Illinois University Edwardsville at home on Feb. 18 for their first game of a three-game series to open the season on the diamond.