Game Recap: Southeastern’s football season comes to an end at the hands of James Madison 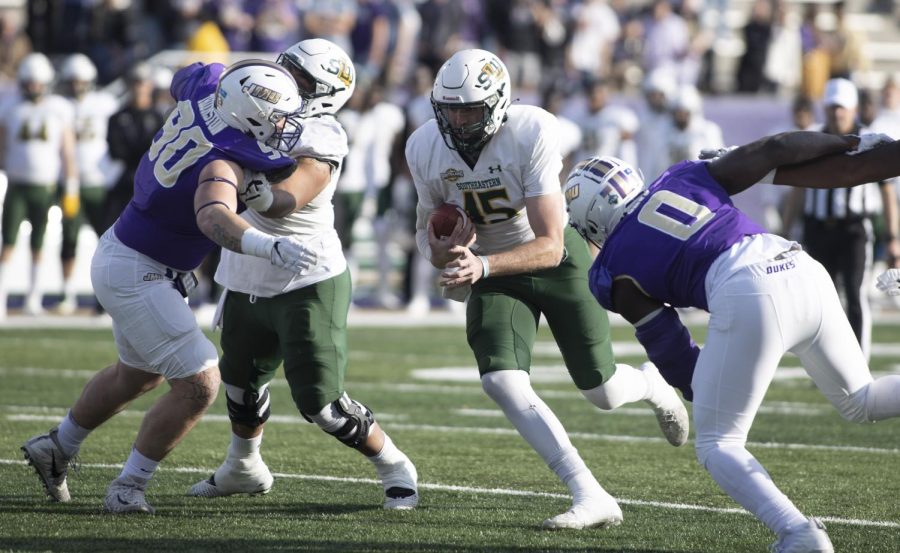 A second-round playoff matchup on the road versus powerhouse James Madison University was going to be tough for the visiting Lions. That proved to be true as Southeastern was defeated by a score of 59-20 Saturday afternoon in Harrisonburg, Va.

Five turnovers committed and big plays given up were the story of the game. Despite throwing for 397 yards and two touchdowns, star signal caller Cole Kelley also tossed three interceptions, one being a pick-six as well as losing a fumble.

Coming off a standout performance on defense against FAMU last week, SLU’s defense failed to repeat the feat, giving up 59 points and 484 yards to JMU’s fourth-ranked scoring offense.

Southeastern only gave up 14 points all game in their first-round playoff matchup to Florida A&M, pitching a shutout through three quarters.

Third-seeded James Madison had 14 on the board after the first 15 minutes of play. The Lions had two different early leads in the first quarter, but still trailed 14-10 to start the second.

After forcing a JMU three and out on the first possession of the ball game, Southeastern marched 52 yards to set up a Mateo Rengifo 21-yard field goal to strike first 3-0.

Kelley matched JMU’s score in quick succession, completing a deep shot to senior wideout Brennon Dingle for a 54-yard touchdown as the Lions regained the lead, 10-7.

After both teams traded punts, James Madison went back on top 14-10 through Johnson’s 63-yard touchdown pass to sophomore running back Solomon Vanhorse, who was left all alone in the middle of the field.

After another SLU punt, the Dukes extended their lead to 21-10 as Johnson tossed another touchdown, this time to junior slot receiver Kris Thornton who hauled in his twelfth receiving score of the year from 57 yards out.

The Lions responded with a long 14-play, 64-yard drive ending in Rengifo’s second field goal of the first half. The sophomore kicker knocked it 28 yards through the uprights, trimming the JMU lead to 21-13.

Southeastern’s defense forced a punt, giving their offense the ball back with under 3:30 to go in the half, still trailing by eight.

Then came the game’s turning point as Kelley was sacked in the backfield by Diamonte Tucker-Dorsey and lost the football. It was recovered by James Madison’s Kelvin Azanama at the SLU 21-yard line.

Johnson and the Dukes would take just one play to turn the takeaway into six. The senior quarterback found Wells Jr. again in the end zone for his fourth passing touchdown of the first half, making it 28-13.

On the next possession, Kelley threw an interception to Greg Ross, giving James Madison the ball at his team’s 35 yard-line. Again, it took Johnson a single play to find paydirt as he used his legs on a touchdown scamper, blowing the game open 35-13 late in the first half.

While attempting to redeem himself, Kelley instead turned the ball over for the third consecutive drive, this time throwing an interception to Tucker-Dorsey who made another impact play for the JMU defense.

Setting up shop at the SLU 22, James Madison was unable to punch it in the end zone, settling for three. Kicker Ethan Ratke split the uprights from 25 yards to pad the lead to 38-13 at the half. After only being down 21-13, Southeastern was outscored 17-0 in the final 2:56 of the second quarter.

Kelley’s woes continued as he tossed his third pick of the contest to begin the third quarter. It was that man again, junior linebacker Tucker-Dorsey, reeling in his second interception of the game and housing it to put his Dukes up 45-13.

Following a punt, JMU added to Southeastern’s misery. Freshman phenom, Wells Jr., added to his monster performance hauling in his third touchdown of the afternoon from Johnson for 31 yards, making the score 52-13 with a quarter and a half to play.

The Lions were forced to punt the ball away for the second time in a row and James Madison would make them pay. Thornton found the end zone for his second time of the day on a three-yard end around. The scoreboard read 59-13 after three quarters of action.

SLU showed fight through its dynamic duo, as Kelley found super senior Austin Mitchell for an eight-yard touchdown making it 59-20. Kelley broke the FCS single-season school record for completions on the play. This was the final score; the Green and Gold’s stellar season has come to a close.

There is nothing for the Lions to hang their heads about, however. Nine wins is tied for second-most in Southeastern history, while Kelley has a good chance of winning back-to-back Walter Payton Awards given to the FCS’s most outstanding player.

Kelley finishes one of the finest statistical seasons in college football history, accounting for 60 total touchdowns (44 passing, 16 rushing) and throwing for 5,124 yards through the air.

For comparison, Louisiana legend Joe Burrow tossed 60 passing scores and added five on the ground while passing for 5,671 yards during his stellar 2019 Heisman campaign with LSU.

Kelley will certainly go down as a legend in the Boot and arguably the greatest player to ever suit up for the Lions.

The standout senior ends his collegiate career second in FCS history for single-season passing yards and second in total touchdowns in a season just one shy of breaking Willie Totten’s record set in 1984 at Mississippi Valley State.

Kelley did break one record: the single-season completion total. This was previously set by current starting NFL quarterback, Taylor Heinicke at Old Dominion in 2012.

Fellow senior, wide receiver Austin Mitchell, reached the century mark in defeat which was a school record ten times he’s done that during his tenure at Southeastern.