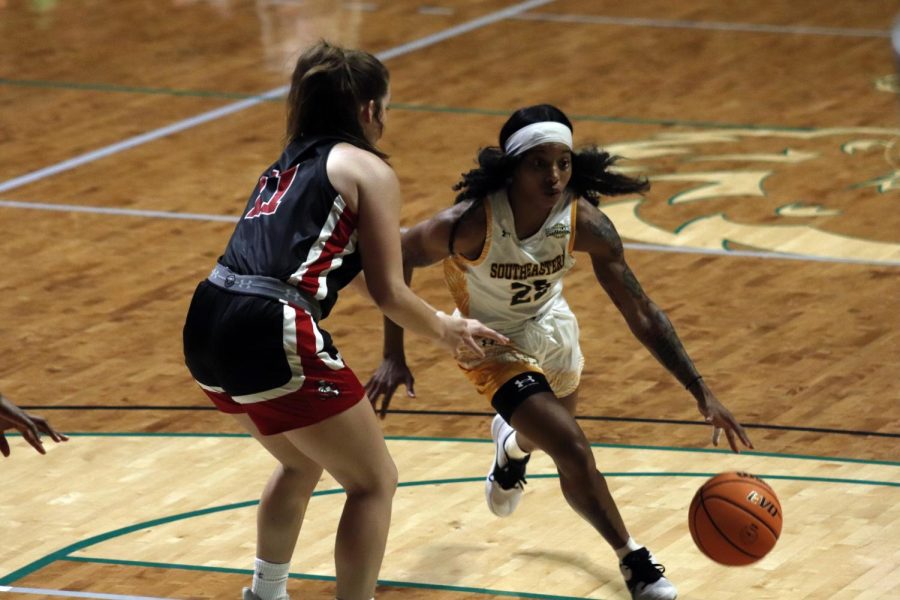 Southeastern women’s hoops won their second straight game to improve to 4-5 on the season. The game only counted as an exhibition for William Carey, so they will remain at 6-3.

The Lady Crusaders also lost to Southern Miss earlier in the year, but didn’t count that game either.

The story of the matchup was the Lady Lions suffocating defensive performance. The 28 points allowed were the fewest given up by Southeastern since the 1974-75 season as well as being the third-lowest in program history.

After the first two quarters of play, William Carey failed to reach double digits, trailing 33-9 at the half.

The Lady Saders were 14 percent shooting from the field with an abysmal 6-43 from the floor; the SLU defense was stifling throughout.

The Green and Gold was able to empty out its bench fairly early, with 13 of the 16 players on the roster receiving minutes.

Natalie Kelly highlighted the emphatic victory, putting up a double-double. The Albany native matched her career-high in points and rebounds, completing a 13 and 16 stat line.

The 6’3 junior forward also added one assist, two steals as well as two blocks, while shooting a perfect 100 percent from the floor, going 5-5.

Kelly was joined by Morgan Davis and Morgan Carrier in scoring double-digit points during the contest.

Davis made the most of her uptick in usage by scoring 13 points, which was a career best. The 6’4 senior center out of Orlando, Fla. shot an impressive 7-8 from the free throw line to go with four rebounds, an assist, steal and block as her teammates went wild.

The Lady Lions have a week off before traveling west to Texas, as they’ll take on former Southland foe Stephen F. Austin Monday, Dec. 20 at 2 p.m.

Southeastern will stay in the Lone Star State to face Lamar and Houston on Dec. 22 and 29 to end the 2021 non-conference slate.