An inside look on Lions’ golfer Zack Barrios 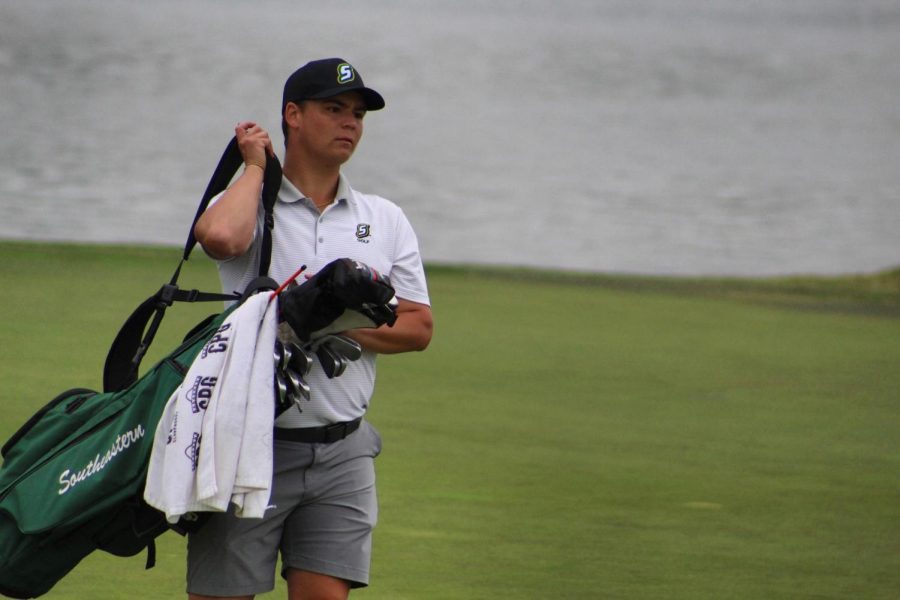 Southeastern golfer Zack Barrios carries his bag of clubs up to the eighteenth hole during Southland Conference tourney this past Spring.

Growing up in Slidell, Zack Barrios first took an interest in golf at 12 years old after watching his dad play regularly on the weekends.

Young Barrios asked his father if he could participate in the sport. He was met with encouragement, but his dad had one condition – he would have to prove himself through diligent practice.

“I took that to heart and went and practiced every day after school,” said Barrios.

That type of dedication led Barrios to become a top performer at his high school, Pope John Paul II. He made the all-metro team both his junior and senior year.

A key role in Barrios’ success was his religion, as he pointed out that attending weekly mass helped him stay grounded out on the greens.

Barrios’ disciplined prep experience allowed him to see that if he wanted something, he was going to have to work hard to get it.

“The main thing that captivated me about golf was the individual aspect of it. You have to take full responsibility for your own actions on the golf course because there is no one else to rely on,” he continued.

Barrios’ aspirations of becoming a college golfer came to fruition, but not how you may think. He started off his collegiate career at Nicholls State before transferring to Southeastern after his sophomore season.

While it was a tough decision at first, Barrios warmed up to the change as most of his new Lion teammates competed with him in junior golf.

“What impressed me most about Barrios was his love for the game. He also has a tremendous work ethic and will to win,” said head golf coach Jake Narro on what stood out to him during his player’s recruiting process.

These same characteristics seen by his coach culminated into him being named Southeastern’s student athlete of the week for Feb. 14, 2021, pacing SLU with a team best score of 145 in the LA Tour Intercollegiate tournament.

This was Barrios’ first tourney for the Lions and was hosted by his former team the Colonels, making this achievement even more impressive.

While having early success at his new home, Barrios has struggled to find his form recently, failing to be chosen in Southeastern’s two most recent competitions.

Keeping things in perspective has helped his mindset on returning to prominence.

“While sitting out I have learned that I’m grateful for this experience. I love playing golf and being a part of a team,” Barrios stated.

The Lions’ next tournament isn’t until Feb. 28, as the fall season has concluded.

“My game has been too inconsistent as of late. I plan to get back to more consistent golf and playing better so I can compete in the Spring tournaments,” he continued.

Narro still has plenty of faith in Barrios.

“First of all, his leadership has been something that I have relied on during his time at SLU. His transparency is also a quality I admire,” he said.

Narro is already eyeing wins for his squad in 2022.

“We have lofty goals this spring. We feel like we should be in the mix to win a conference championship. We also want to improve as the spring evolves and be at our best when it counts the most in late April,” he added regarding the possibility of participating in the NCAA tournament.

Barrios noted that he shares a similar feeling.

“I feel like we have enough talent to compete for a conference championship and I know everyone else on the team feels the same way,” he concluded.