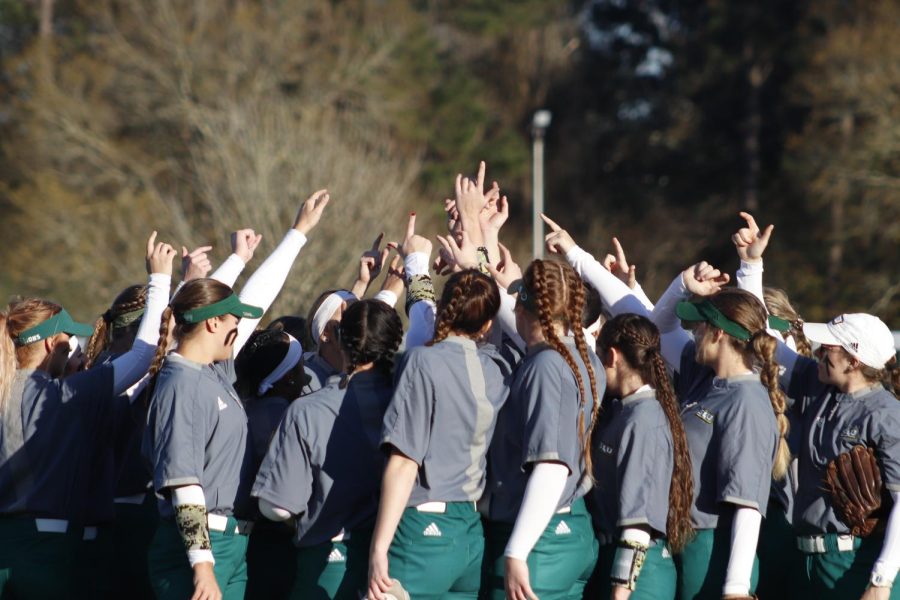 Lady Lions softball round up in a circle. Their first game for the Spring will be in North Oak Park, Feb. 11 against Southeast Missouri.

After finishing fifth in the Southland last year, the Lady Lions will look to improve upon their win total in 2022.

There will be five fewer teams in the conference with the departures of Central Arkansas, Lamar, Abilene Christian, Sam Houston State and Stephen F. Austin in the offseason.

Despite going from 12 teams to seven, the competition will still be stiff. With Houston Baptist, Incarnate Word, Texas A&M Corpus Christi, Nicholls State, McNeese State, Northwestern State and your very own Southeastern remaining in the league, the Southland crown is up for grabs.

The Lady Lions will have 11 players back from their 2021 squad, including five positional starters and their top three pitchers. Nine new faces will appear for the Green and Gold composed of incoming freshmen and transfers. Most notable is pitcher KK Ladner who comes to Hammond via Southern Miss., where she went 9-7 with a 2.70 ERA as a starter for the Golden Eagles last year.

Coming off a 28-23 (14-10 in SLC) record this past spring, the current team is expecting bigger things this time around. The media has them picked to finish third in the Southland in their preseason polls.

“Conference championship. Knock off another Power 5 opponent as we have the last two years. Postseason. NCAA Regional. Break the school record for wins. All of those types of things are what we’re focused on right now,” said head coach Rick Fremin, who is going into his seventh season at the helm for Southeastern.

Perhaps the bread and butter of Fremin’s teams has been their ability to swipe bags. Since 2016, Southeastern has led all of Division 1 in either total stolen bases and/or steals per game.

However, improvement can be made on the defensive side, according to Fremin.

“Cleaning up our defensive play and fielding percentage you know .980 or higher… eliminate any miscommunications, playing clean defense and just taking care of the ball would be our number one thing,” said Fremin on where he wants to see the biggest area of progression.

Rizzo is one of the proven cogs in the Lady Lion lineup and has played both shortstop and third base during her three years at Southeastern. Being one of the few upperclassmen she offers knowledge for her more youthful teammates.

“It’s really important. This team we have this year has more new people than we’ve had before. Honestly this is a young team but most of them have been playing for Iron Teeth which is coach Fremin’s travel ball team and they know how the system works,” said the junior and two-time All-Southland standout on guiding all these talented underclassmen this season.

Also returning is fifth year senior and multi-All-Southland teamer Madisen Blackford. She is Ms. Do It All for the Lady Lions as she has experience in the outfield, first base, as well as catcher where she resided for the final six games of last season.

The most tenured member of the 2022 Lady Lions leads by example not only on the diamond but off of it as well. She has made the Commissioner’s Honor Roll in all four years at Southeastern including being named to the All-Southland Academic first team in 2020.

Blackford and co. will look to get off on the right foot starting Feb. 11 in the season opener against Southeast Missouri which is the first of a three-game home stand in the Lions Classic 1. Saturday Feb. 12 concludes the tournament and Southeastern is scheduled for a double header playing SE Missouri again before ending with Alabama A&M.

The team will then travel west to New Mexico to participate in the Troy Cox Invitational Feb. 18-20, where they will take on two Power Five opponents Nebraska and Iowa State, among others.

SLU will next take an in-state bus trip to Youngsville for the Mardi Gras Mambo tourney on Feb. 25-27. The most notable matchup is against powerhouse Alabama of the SEC.

Tennessee will be the ladies next destination as they will take part in the Memphis Tournament March 10-12, with the marquee game being against Big 12 foe Oklahoma State.

Road trips to LSU (March 15) and Jacksonville State (March 17) come before a return to the Volunteer state when Southeastern will take part in the UT Chattanooga tournament March 18-20.

Away to ULM (March 23) is up next and a March 29 home double header vs. Alcorn State rounds off the schedule before conference play.

The first Southland test will be in Hammond against UIW April 1-2. An April 5 double header vs. coach Fremin’s former team in JSU will ensue at North Oak Park

The team will travel to Lake Charles to take on McNeese April 8-9. ULL comes to town April 12. Then there will be a road series at Nicholls April 15-16 before the final non-conference game at Southern takes place (April 19).

Southeastern will play host to the Southland Conference tournament (May 10-13) for the second straight year.