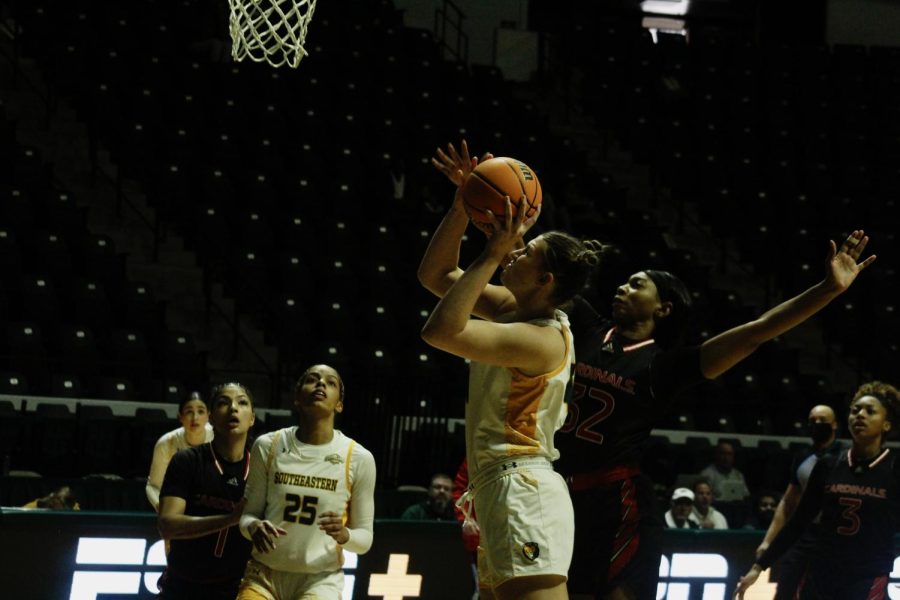 Senior center Morgan Davis attempts to score in the paint during the Jan. 29 women's basketball game against University of Incarnate Word in the University Center. The Lady Lions finished with a 76-49 victory against the Lady Cardinals.

Men and women’s hoops had a very successful week on the hardware going 3-1 overall in their games against Texas A&M Corpus Christi and Incarnate Word.

Women’s basketball had a huge win over Corpus Christi on Thursday night at the University Center. In a battle of undefeated teams atop the Southland. It was the Lady Lions who came out on top 48-43.

Southeastern had built a 30-20 halftime advantage, but the Lady Islanders didn’t back down. A 15-2 run in the first eight-plus minutes of the third quarter saw Corpus Christi take a stunning 35-32 lead.

SLU would score the last five points of the quarter to regain the lead 37-35 heading into the fourth. The Lady Islanders managed to tie the game at 40 with eight minutes to go. From then on the Lady Lions went back on top and never trailed until the buzzer sounded.

The lead was not maintained without a fight, as Corpus Christi had the ball late with a chance to tie trailing 43-46. Olivia Dowden’s three-point attempt with 10 seconds on the clock was no good and Southeastern grabbed the rebound.

Caitlyn Williams was fouled and sent to the line where she iced the contest with two clutch free throws while also finishing as the team’s top scorer on the night with nine points. SLU escaped with a crucial conference victory catapulting them to first in the standings.

Saturday’s matchup for the ladies against lowly Incarnate Word went about as expected with Southeastern winning 76-49. The first quarter was a tight affair with the Lady Lions clinging to an 18-16 lead. From there the floodgates opened, as the Lady Cards were outscored 58-33 over the final three periods of play.

Next up is a trip to Lake Charles to take on the Lady Cowgirls of McNeese on Feb. 3 at 5 p.m.

As for men’s basketball, they split their two contests at home vs Corpus Christi and Incarnate Word. The Lions got out to a 36-34 lead at halftime Thursday night against the Islanders before being blitzed in the second half 52-35 making the final score 86-71 in favor of Corpus Christi.

Starting senior point guard Keon Clergeot did not play in the game due to illness. Jalyn Hinton carried the load on offense, posting 24 points and 13 rebounds good for his fourth double-double of the season. Joe Kasperzyk and Roscoe Eastmond added 17 and 11 points respectively while the team’s leading scorer, Gus Okafor, was held to nine.

Saturday was a much more positive outing for the Lions. Clergeot returned to the lineup with a vengeance posting a career-high 29 points and shot 6-8 from three-point land.

Hinton and Okafor weren’t far behind putting up 19 and 14 points themselves. Hinton was one rebound shy of another double-double with nine; Okafor snared seven boards helping Southeastern to a bounce-back 78-68 win.

SLU flipped the script from their last game when they erased a one-point halftime deficit to come from behind in the second half. The men will join the ladies in Lake Charles to take on McNeese this Thursday and move to 3-2 in the Southland and 11-11 on the season.

Tennis opened their season in Hattiesburg where they lost 4-0 to Southern Miss on Saturday. The team was without projected starters Kate Oborina and Sonya Kanarskaya, but still managed to put up a fight.

Top doubles duo Putri Insani and Flory Bierma managed to win the first match of their set before losing the last two. Insani was also one win away from a straight-set victory in singles before it was stopped while Bierma had a split set.

Freshman Polina Paunova held a lead in the second set of her single’s match. Despite having some success, Southeastern was done in by three straight-set wins by the Lady Eagles.

The team will travel to McComb, Miss. where they will take on Wyoming as their next opponent on Saturday, Feb. 5 at 1 p.m.

Next on the agenda will be a Sunday road trip to Mobile for the USA (University of South Alabama) Invitational on Feb. 6.