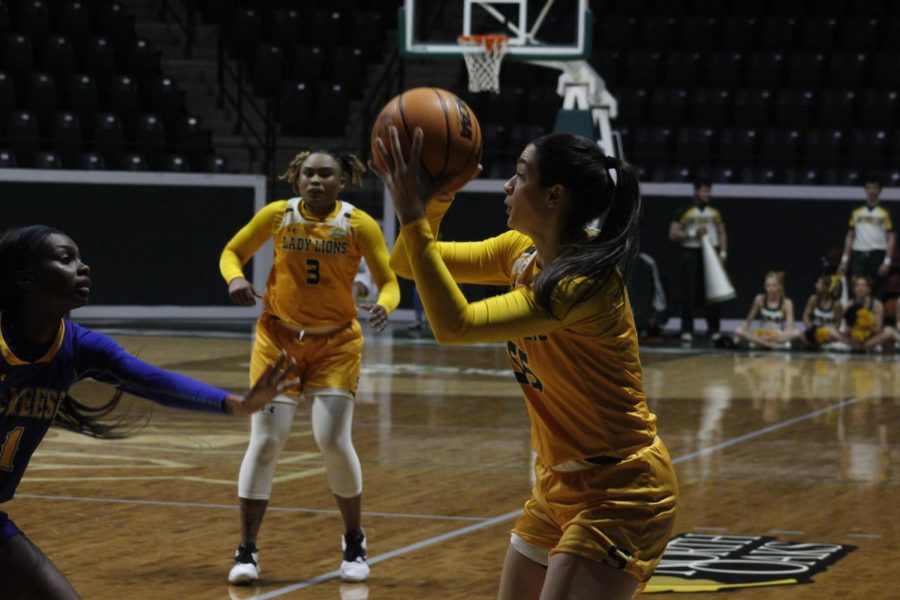 Sophomore guard Hailey Giaratano attempts to take a shot after a steal in the Feb. 11 game against McNeese in the University Center.

The Lady Lions got their second win over the McNeese Cowgirls in at the University Center on Feb. 10 with a final score of 78-68. SLU gained another conference win, further pushing their record to 8-0 this season.

The Cowgirls had a seven-point lead early in the fourth quarter, but the Lions rallied to come back and lead by 10 points by the final buzzer with their defensive effort. Senior center Morgan Davis scored eight in the last quarter of the game, solidifying the lead for the Lady Lions.

“I am really trying to embody what they are telling me and to be aggressive and be that aggressor at the net and really protect our side of the court,” Davis said about following advice from the coaching staff.

Davis’ physical presence by the net was evident through her team-leading seven rebounds and 8-10 for FTs.

Head Coach Ayla Guzzardo explained, “She’s a big presence offensively and defensively, she draws a lot of attention, but she played physical this game.”

Senior guard/forward Morgan Carrier led the game as she scored 19 points with five three-pointers. Carrier and Davis’ net protection came in handy during the last quarter, where the defense held the Cowgirls to only scoring 13 points.

“It is one of a kind. Morgan is a really fiery player, and I love that. I think we all really balance each other out on the court. Her spark always lights me up,” Davis said of her chemistry with Carrier.

The abilities of senior forward Caitlyn Williams and junior guard Chrissy Brown combined for a total of 11 defensive rebounds to assist with the suppression of the McNeese offense, with the team having 19 DRBs for the night.

The Lions caused McNeese State to have 24 personal fouls and 21 turnovers, which hurt the Cowgirl’s offensive efforts furthermore sealing the deal for SLU’s victory.

Southeastern’s Lady Lions look to continue their winning streak Saturday, Feb. 12, at the University Center against Houston Baptist University for the second time this season.