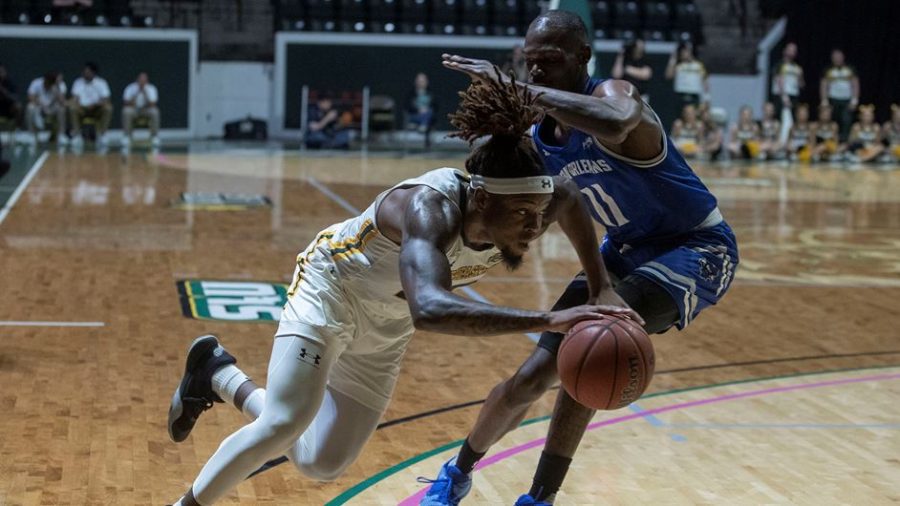 Southeastern defeated UNO 84-79 Thursday night at the University Center to improve to 16-13 (8-4) in Southland play.

UNO drops to 16-10 (9-2) and are now tied with Nicholls State for first place in the standings. The Lions remain in third but pick up a huge victory over the former conference leaders.

The first half, like the second, was a tight back and forth affair with both teams taking and losing leads until SLU was able to make a late spurt going into the halftime locker room up 36-31.

During the early stages of the second half, guard Daniel Sackey drained back to back three’s giving his side a 41-40 lead with under 17 minutes to play.

However, the Lions would regain the lead once more with 13:16 remaining and held the edge until a three point play from UNO guard Troy Green put the Privateers on top 70-69 with 4:55 to play.

This would be the last time the visitors held the lead as Southeastern went on a 9-0 run for the largest lead of the game from either team going up 78-70 with just 1:22 left.

UNO tried to claw back but it was too little too late. After cutting the deficit to three, 82-79, Coach Kiefer dove deep into the playbook to pull out a game sealing call for the Green and Gold.

Jalyn Hinton acted like he was inbounding the ball only to pass it on the baseline out of bounds to Keon Clergeot who then fired a beautiful football-like full-court pass back to Hinton after the senior forward made a beeline towards the unoccupied UNO goal.

The former D2 Sunshine State conference player of the year from Florida Southern slammed home the dunk to seal the win for the Lions. An ensuing three point miss by leading Southland scorer, Derek St. Hilaire dashed any hopes of a Privateer comeback as the scoreboard read SLU 84 UNO 79 with triple zeroes on the clock.

In a game that featured nine lead changes, SLU walked away with the hard fought victory. Gus Okafor paced the Lions with 21 points while also adding 7 rebounds.

Okafor wasn’t alone as three other teammates joined him in double figures. Hinton added 18 points and nine rebounds, one shy of his sixth double-double of the season. This was the fourth time on the year that the Boston native was just one board shy of the coveted feat.

Turnovers proved to be the difference in this all important battle, with Southeastern doubling UNO in forced turnovers, 18-9.

The Lions defense showed their teeth holding the normally prolific St. Hilaire to just 15 points and 0-6 shooting beyond the arc. His season average was 20.8 coming into the contest.

Next up for men’s hoops is another matchup with a premiere Southland conference foe; Nicholls comes to town for senior night this Saturday Feb. 26 at 4 p.m.

SLU will close out the campaign in Natchitoches vs NW State concluding their regular season.

Post-season play will be held from March 9-12 in Katy, Texas for the 41st edition of the Southland conference tournament.

Southeastern won the Southland-Tip Off tourney back in January on the same court and will be hoping recent history can repeat itself.