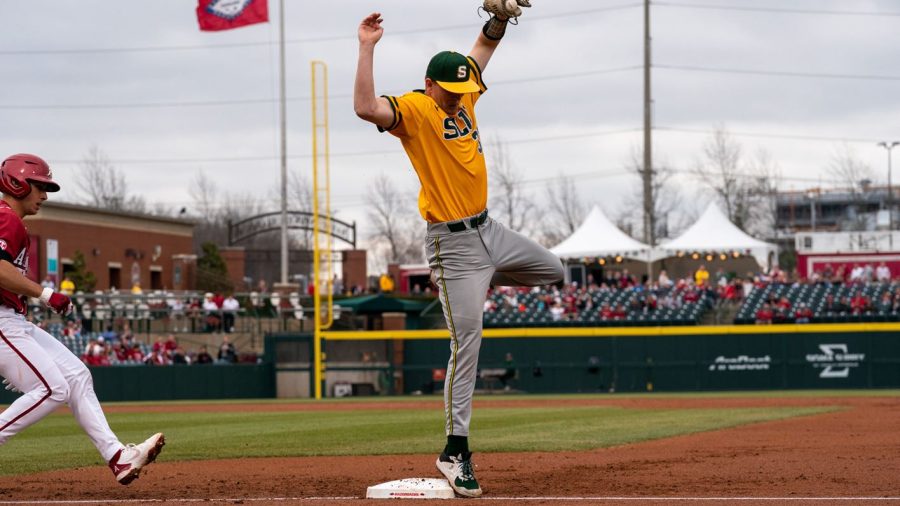 The Lions lost their double header against the Razorbacks, ending the series 1-2 in the opponent's favor.

SLU traveled to Arkansas for a three-game road series at Baum Walker Stadium on March 4th and 5th, winning the first game 7-3 on Friday, followed by two losses Saturday 2-4 and 1-11 in a doubleheader.

The Lions took a significant lead in game one with errors coming from the Razorbacks pitchers. However, Arkansas made adjustments to these critical mistakes and came back to win a close match in game two. In game three, the Razorbacks put up an impressive performance, with the ten-run doubleheader rule ending the third game in the eighth inning.

In game one, Will Kinzeler pitched a fantastic game against the Razorbacks, who were ranked No. 3 in the nation at the time. Kinzeler allowed only a single run and five hits in six innings pitched in addition to five strikeouts for the Lions. The team rallied behind this effort to hold back the Hogs, with pitcher Gage Trahan having three strikeouts and one hit in 2.2 innings.

Southeastern capitalized on the Razorbacks’ pitching mistakes during this match, with two walking RBIs and two hits by pitches occurring in the seventh inning that handed the Lions seven runs. First baseman Preston Faulkner had two hits, and center fielder Tyler Finke had two hits and two RBIs to lead SLU in batting. In addition, shortstop Evan Keller, second baseman Rhett Rosevear, catcher Bryce Grizzaffi and right fielder Christian Garcia each had one hit and one RBI, respectively.

Due to weather conditions predicted to reach Fayetteville on Sunday, the series had a doubleheader on Saturday, March 5.

Game two of the matchup was slow to start, with the Lions going scoreless until the sixth inning when Faulkner hit a home run, bringing himself and Keller to home plate for the only runs for SLU.

The work on the mound helped the Lions steadily hold back the Razorbacks; however, Arkansas catcher Michael Turner combated the Lions’ defense with three RBIs, two hits, one run and a homerun for game two.

Unfortunately, the third game of the series ended in the eighth inning as the Razorbacks scored 11 runs to the Lions one run, leading to the ten-run rule for doubleheaders coming into play, ultimately ending the game.

Keller had two hits, a run and an RBI to be the Lions’ lone run, with catcher Connor Manola having a single hit.