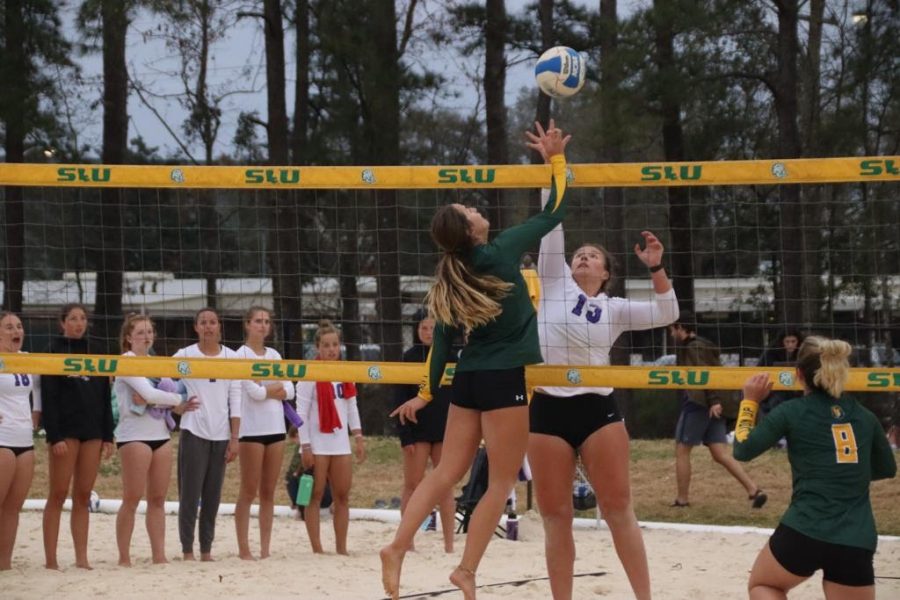 The Lady Lions battled it out v.s. Spring Hill in the Beach Bash on Tuesday, March 8.

Southeastern sports kick-started the month of March as things start to pick up.

SLU baseball had a terrific bounce back week after the embarrassing 22 run loss to Tulane last Tuesday. The Lions came from behind to defeat #25 LA Tech at Alumni Field 4-3 on Wednesday and managed to take game one of their series in Fayetteville v.s. #3 Arkansas.

Standout sophomore, Will Kinzeler, pitched a gem going six innings and giving up just one run in the team’s 7-3 win. The Razorbacks responded winning games two and three, 4-2 and 11-1.

Men’s basketball beat Northwestern State 85-80 in their regular season finale on Saturday to finish tied for second in the Southland standings at 10-4. Senior Jalyn Hinton starred in the win with 27 points and 13 rebounds.

Next up is the conference tournament with Southeastern’s next game being tomorrow night in the semis as their high seeding earned them a first round bye.

Their opponent is TBD, but two wins would land the Lions in the NCAA Tournament for the second time in school history with the other being in 2005.

Women’s hoops lost to Lady Deacons in Natchitoches 56-51 on Saturday to conclude their regular season. SLU placed third in the Southland at 10-4 and will also need to win the conference tourney if they want a spot in the Big Dance.

Beach volleyball started their season last week with four straight losses but rebounded with a win over Texas A&M-Kingsville on Thursday 3-2 at their new complex on campus.

The ladies split their two games at the ULM Bayou Bash losing to Houston Baptist 2-3, but defeating Nicholls 5-0. Southeastern is currently 2-7 on the year and will play five games from March 19-20 at the Stephen F. Austin classic next weekend.

Golf enjoyed a terrific last outing winning the Colin Montgomerie Invitational this past Monday and Tuesday in Houston.

The Lions comfortably paced the tournament shooting +4 as a team which was 13 strokes ahead of second place Gonzaga who shot +17 as a team.

All five players finished in the top 25 while sophomore Michael Landry won the individual championship shooting -6.

Tennis had a rough two games falling to Jackson State and LSUA at home by scores of 2-4 and 0-4 at the weekend.