Baseball: Tenth inning win in game one leads to series win over TTU 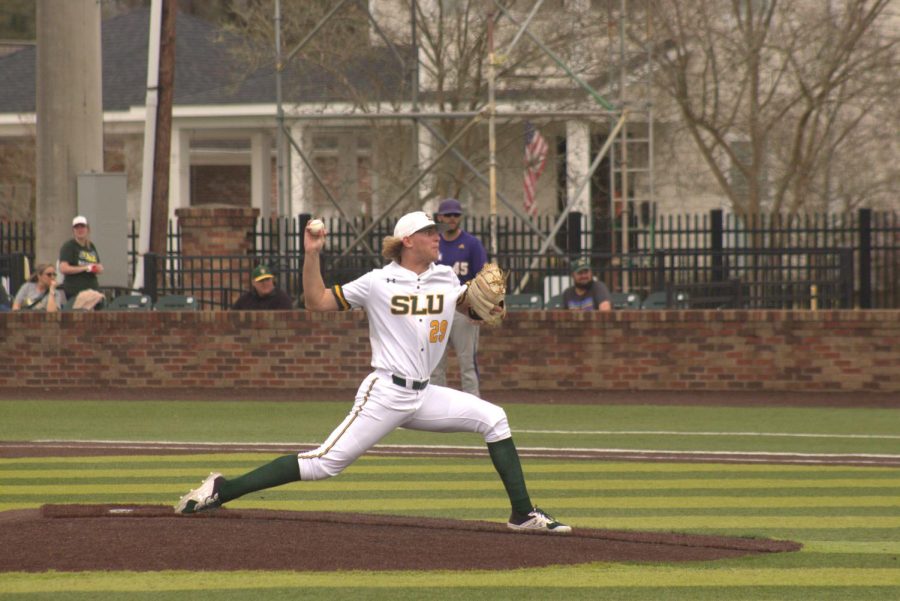 Will Kinzeler throws his final picth after staying on the mound for nine innings straight.

Southeastern baseball struck off March 11-13 with a three-game series versus Tennessee Tech University, winning the series 2-1, with the finals scores being 2-1, 8-2 and 18-4.

The Lions played at Alumni Field, where the team’s record was boosted to 7-9; SLU has two more weeks until conference play in the Southland.

After an early solo home run by the Golden Eagles on the game’s second pitch, the game continued 0-1 up until a home plate steal by pinch-runner Tyler Finke late in the ninth inning.

“Relentless and ruthless man, no fear there to go ahead and steal home and tie the ball game up,” head coach Matt Riser said of the steal. “If you think you got it, do not look back.”

Riser explained how crucial it was for Finke to be composed and have confidence when the team needed it most, from leading on third base to sliding at home plate.

Pitcher Will Kinzeler threw for a staggering nine innings allowing only a single run and six hits with nine strikeouts. “Kinzeler really controlled the game and controlled the box after a lead-off home run,” said Riser.

In the bottom of the tenth, right fielder Christian Garcia led on third base, as third baseman/pitcher Trey Harrington stepped up to the plate and got a base hit, sending Garcia home after a fielder’s choice confirmed Harrington was safe at first.

“There was a runner on first, and second, I was trying to get something over the infielders’ heads,” commented Harrington when discussing what was going through his head during his game-winning at-bat.

Game two started strong for the Lions, with four runs in the second inning and another four in the seventh. First baseman Preston Faulkner had one hit, two runs and three RBIs. Connor Manola batted for one run, two hits and three RBIs. Overall, both players had a significant role in SLU’s win against the Golden Eagles.

The Lions had a rough game three, as TTU scored 11 runs in the first inning with 18 overall for the entire game.

Regardless of the loss, Manola had two RBIs, one hit and one run, Keller batted one hit, run and RBI. Rosevear chipped in two runs.

With another series win for SLU, the team plays powerhouse number one ranked Ole Miss Rebels at Alumni Field on March 15, then move to play a three-game series versus Samford in Birmingham, Ala.