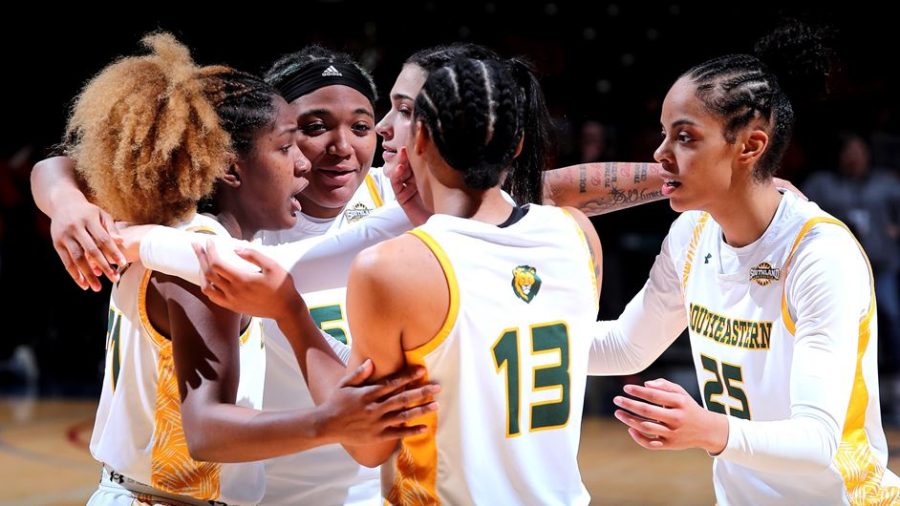 Several of the Lady Lions huddle up during the game.

Southeastern’s women’s basketball team traveled to Katy, Texas for the Southland Conference tournament as a No. 3 seed.

Though the journey ended with a loss, SLU made history with its first-ever championship final for the Southland title and their first tournament wins since the 2001-02 season.

The Lady Lions played their first game against seventh-ranked New Orleans Privateers, winning 80-66 on March 11, then moved to the semifinals, playing and beating second-ranked Texas A&M Corpus Christi 59-54 on March 12. Next, SLU played the University of Incarnate Word in the championship, losing this closely battled game 56-52 on March 13.

Tied up 50-50 at the end of regulation, the game went into overtime in which four missed shots by SLU and a single lay-up by UIW allowed the Cardinals to take the late lead and win the game after the five-minute overtime.

The Lions had trouble on defense against UIW, in which Cardinals’ forward Tiana Gardner resisted the Lions’ advances on the court by scoring 22 points and 12 rebounds.

Scoring in the semifinal was led by Gairatano, who scored 15 and four rebounds, and guard Alexius Horne led SLU with 17 and five rebounds.

The team’s 40% three-point scoring, 11 steals and 32 rebounds assisted majorly with the higher-ranked match-up versus Corpus Christi.

SLU also ruled the court in the quarterfinal, with the team having 40 rebounds, 10 steals and a 57.1% field goal percentage that allowed the Lions to maintain a strong lead the entire game.

The team currently has many returning players, which many hope could repeat a championship appearance with this season being a learning experience for the very talented and young roster.