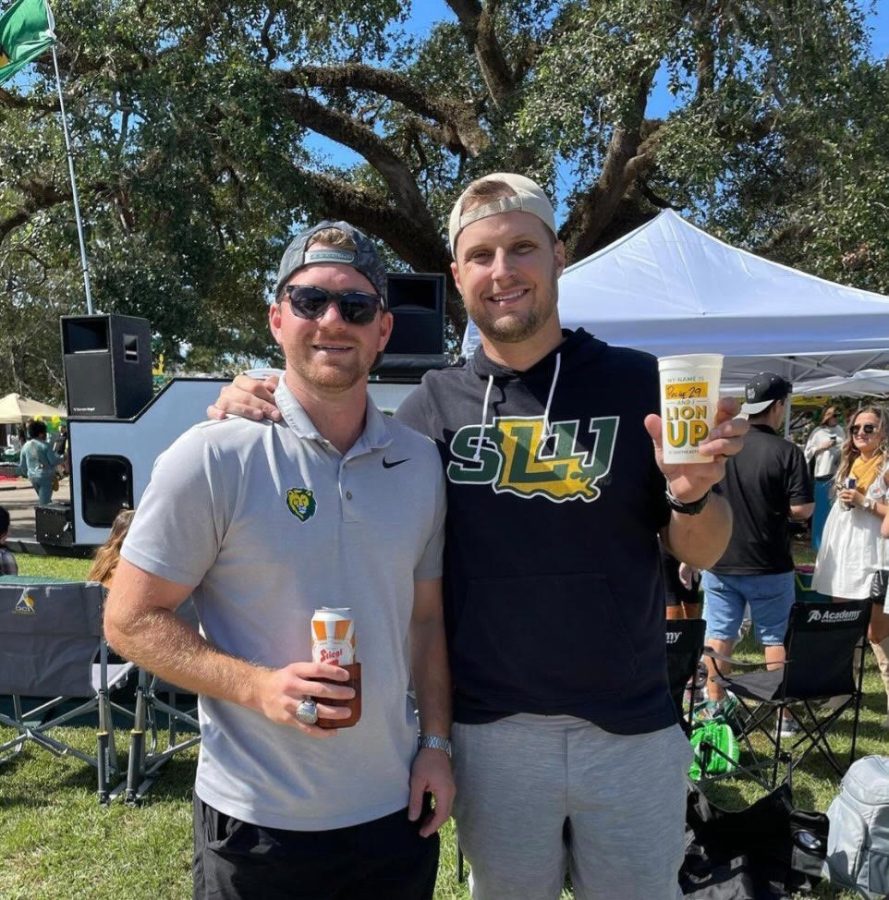 Harris Beall (left) and Steven Poche (right) enjoying one of their own tailgates during the 2021 fall football season as the two founders of Dukes of Hammond.

The two friends are both very passionate about Lions sports and wanted to have a way to make the games more enjoyable for former SLU grads and fans alike.

“The idea behind it was to give people a reason to come back into town who may have moved off since finishing school at Southeastern and to add interest to each sports program,” said Beall.

Beall played football from 2012-15 as a kicker/punter for the Lions while Poche pitched for the baseball team from 2010-2013.

Both gentlemen reside a few blocks from SLU’s campus and have been thinking of the idea of forming a group since the summer.

Poche is a Lions Athletic Association board member who raises money and promotes all Southeastern sports programs.. His wife was also Miss Southeastern in 2014 so the couple is heavily involved with the university.

The duo of Beall and Poche came up with the name “Dukes of Hammond” before the football season started one day and started going to the coaches show held on Mondays during the season and even got a shoutout from head football coach Frank Scelfo.

From there, Dukes of Hammond took off and their first tailgate was for the football team’s homecoming game against Houston Baptist back in October, which was a massive hit with the student body.

The group sets up near Friendship Circle in spot 36 on the stadium side. They cook food, grill, drink beer and enjoy cornhole amongst other activities. Anyone is welcome from students, fans and even locals wanting to enjoy the Lions take the field.

After that Oct. 16 contest at Strawberry Stadium, the group held tailgates at each of the remaining home football games where the crowds kept growing. Even fans from opposing teams have shown up to partake in the fun.

“Athletics are doing a great job of putting a great product on the field and we want to make sure people don’t have any excuse to not go out there and watch even if you went to school at Southeastern or not,” stated Poche.

“Whether you’re in school or out of school we think you should support Southeastern. It’s the biggest piece of our community,” added Beall.

Up next for The Dukes of Hammond will be a tailgate for SLU baseball’s April 6 matchup at Alumni Field vs. Troy at 6 p.m. on a Wednesday, and part of it will be a cookout for the team.

A player’s dad volunteered to make pastalaya and the marketing department is helping to set up music. Anyone who wants to support is welcome as the organization looks to continue growth.

Softball and beach volleyball could also be on the cards for future events during their spring seasons so be on the lookout.