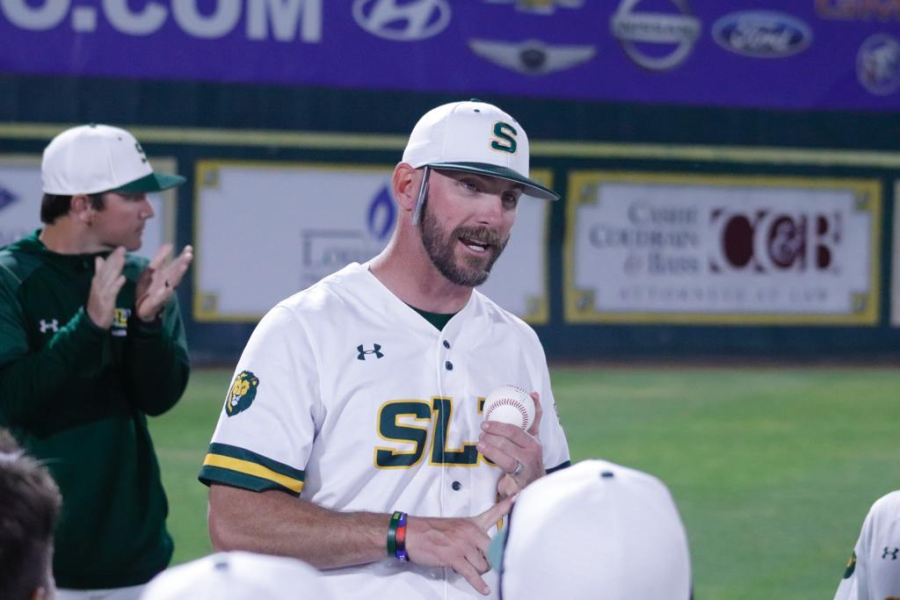 SLU baseball started the week with a stunning upset of the No. 1-ranked Ole Miss at Alumni Field Tuesday night.

The Lions defeated the Rebels 5-1 despite going down 1-0 early. Ole Miss’ Kemp Alderman hit a two-out RBI double in the top of the second to score teammate TJ McCants from first, who reached on a walk.

Southeastern immediately responded in the bottom half of the inning through Tyler Finke’s solo blast over the left-field wall.

A bases-loaded wild pitch brought in Shea Thomas to make it 2-1 in favor of the home team after three innings of play.

SLU would hold their one-run advantage into the bottom of the seventh when the Green and Gold finally created some breathing room. An error and a fielder’s choice gave the Lions a 4-1 lead.

Preston Faulkner sealed the victory with a solo shot in the eighth, putting his side up 5-1.

Southeastern’s pitching staff was arguably the star of the show as Andrew Landry and Gage Trahan combined for four perfect innings without allowing a single batter to reach base for the Rebels their final 12 outs.

Adam Guth picked up the win, starting the first 5.0 innings while allowing just a single run on the bump.

In the team’s weekend away series at Samford in Birmingham, the Lions were humbled getting swept by the Bulldogs. Despite having a momentary lead in all three contests, the Lions lost 10-4, 6-5, and 16-8.

SLU basketball dropped their first-round postseason matchup at the hands of South Alabama in Mobile, 70-68 in The Basketball Classic. This was the tournament’s inaugural edition and is for the best teams not selected for the NCAA Tournament or the NIT tournament.

Southeastern’s comeback attempt came up just short as the team had turned a 20 point second-half deficit with over 12 minutes remaining to a two-point loss.

Lady Lions beach volleyball enjoyed their most successful two-day period of the season this past weekend going 4-1 in the SFA Invitational #2.

SLU softball continued its solid season, going 4-2 in its six games this past week. The team fell at the hands of No. 20 LSU on Tuesday evening 11-2 in Baton Rouge but would bounce back nicely.

On Thursday, the Green and Gold started their resurgence with an 8-5 win at Jacksonville State.

Southeastern then traveled to Tennessee for the UT Chattanooga Tournament, beating Bucknell twice by scores of 5-4 and 11-2.

Host’s Chattanooga proved a worthy opponent as the Lady Lions split the two matchups, winning the first 11-5 before losing the last game 4-3.

The tennis team lost in Thibodaux on Saturday 5-2 to rival Nicholls State in their only matchup of the past week.

Newcomer Eugene O’Malla ran a time of 46.04 seconds in the 400-meter run rounding off the record breakers in Green and Gold.