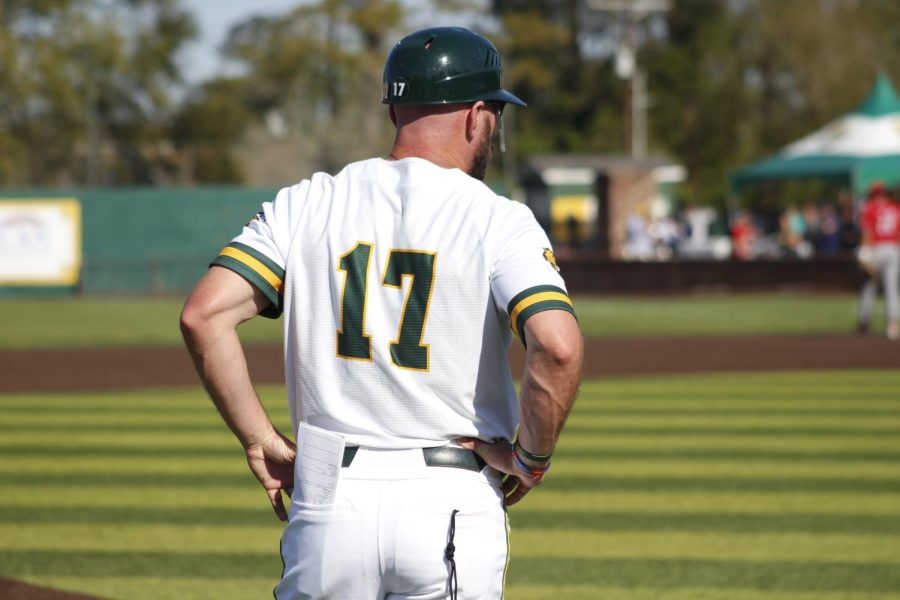 Head coach Matt Riser is preparing to call players as a third-base coach.

Southeastern hosted Nicholls State University at Alumni Field for the first in-conference series on March 25-27, losing all three games,6-4, 11-4 and 10-7.

A struggle to keep the Nicholls batters at bay led to the Lions being outscored 27-15 for the weekend, which created difficulties for SLU to rally to gain a solid lead against the Colonels.

Game one showed signs of victory for the Lions as SLU kept a 4-1 lead up until the ninth inning. Alas,  the Colonels came back with five runs, leaving the Lions needing to score three runs in one inning to win the game.

Regardless of the outcome, pitcher Will Kinzeler presented why he is the Friday night starter, going for six innings and only allowing one run and six hits for his time atop the mound.

First baseman Preston Faulker assisted the Lions with three RBIs in the third inning with a clean hit to center field, sending three Lions to home plate due to Faulkner’s double play.

A 2 p.m. Saturday, game two was even rougher for the Lions, as three homers from Nicholls and a grand slam by Colonel right fielder Xane Washington made it difficult for the green and gold to apply any pressure during at-bats throughout game two.

Catcher Bryce Grizzaffi showed a glimmer of a comeback in the seventh inning, as a home run down left field brought himself and two of his teammates home, bringing the score to 6-4. However, Nicholls’ eventful eighth and ninth innings halted any chance of a Lions win.

“It’s about executing and finishing the game. We had a chance to come back after the homer, but we just have to keep the sticks hot and just keep pounding and not giving up. Not turning it over and not letting our opponents beat us like that,” said Grizzaffi.

The Colonels took advantage of pitching struggles by the Lions in game three, scoring six in the first inning on walks, hit by pitches and infield errors. This rough first inning, combined with two home runs and two runs by Nicholls, sealed the series sweep at Alumni Field.

The only comment head coach Matt Riser had to say about tweaks to the mound and at-bats was, “Dog it out,” showing the team’s dedication to finding its groove and beginning a winning streak for SLU baseball.

Southeastern players UL Lafayette at Alumni Field on Tuesday at 6 p.m. and looking to improve their in-conference record with a road trip to the University of Incarnate Word for a three-game series, April 1-3.