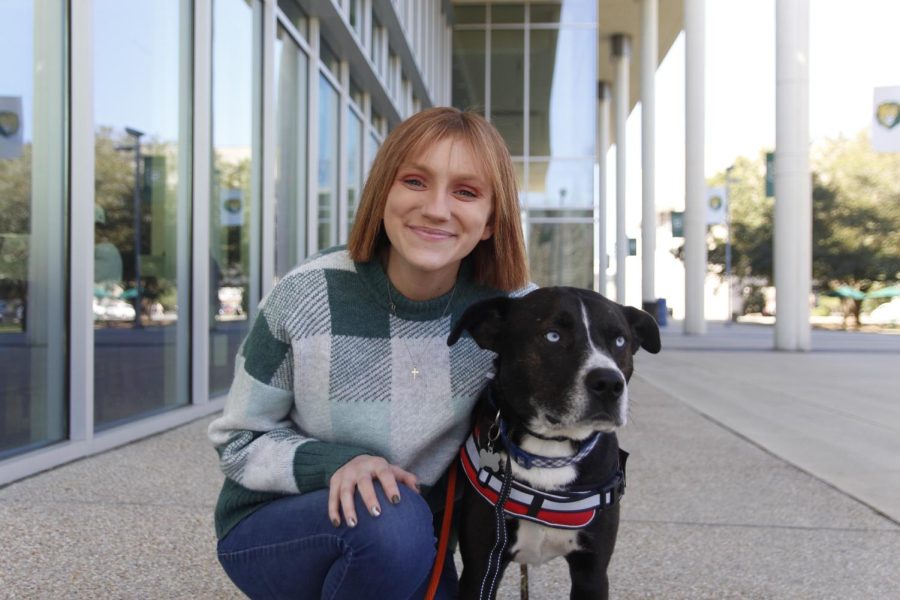 Baileigh Picou and her service dog Bruno are a well-known duo on campus. Bruno assists Picou with daily tasks, making it easier for her to make it through a day on campus.

When people meet Baileigh Picou, a junior general studies major, they associate her with liveliness, positivity and Southeastern spirit.

From managing events as an ambassador for the Office of Student Engagement, to winning second runner up in the Miss Southeastern 2022 competition to becoming the newly-elected president of the Student Government Association, Picou is a student who has found much joy in her campus involvement.

At first glance, most would not know Picou is living with dysautonomia, an illness caused by the malfunctioning of a person’s autonomic system, which controls involuntary body functions such as heart rate, blood pressure and sweating.

Although various forms of dysautonomia affect over 70 million people worldwide, their conditions are not taught in most medical or nursing schools, leading Picou to battle an undiagnosed illness for many years.

“When I was in eighth grade, I got pneumonia, which turned into bronchitis and then into a lung infection. I would get constant migraines, and I didn’t know why. My junior year of high school, I began having GI [gastrointestinal] issues. The symptoms just kept persisting,” Picou said.

In January of 2021, Picou caught COVID-19. After overcoming the virus, she continued to fall ill and experience new symptoms. Then one morning, she woke up and could not even stand long enough to do her hair.

“I was still dizzy, insanely fatigued, my heart rate was always high even if I was just sitting, I was super weak, and I had a lot of joint pain and muscle pain. I could not walk very far without feeling like I was going to die, and my blood pressure was really low. I was laying in bed one day still feeling horrible. I couldn’t go to work, and my heart was just pounding,” she said.

Picou took various tests, received multiple medications and endured several instances of what is commonly referred to as ‘medical gaslighting.’ She was often told her symptoms were only linked to anxiety.

She had no clear answer to what was causing her years of distress until one day when her primary care doctor mentioned his wife and daughter have a condition called dysautonomia. This information led Picou to find the one cardiologist in Louisiana who treats this condition, located nearby in Covington.

Doctors finally diagnosed Picou with dysautonomia, and soon after, she was also diagnosed with fibromyalgia, a condition that causes pain all over the body and fatigue.Picou began to navigate life with her new diagnosis. She cut out carbs, sugar and caffeine and limited her activity, but one thing she refused to do was take a year off from school.

“I just jumped right in,” she said. “I led homecoming for SGA. As a leader, it’s a little bit harder. I don’t want to miss any events I or my team is putting on. I have to know my limits. Last semester, I was horrible at knowing my limits.You don’t want to miss out, and I think that’s the hardest part about being so involved on campus with a chronic illness. The Homecoming game happened, but I wasn’t able to go because of handicapped parking issues.”

According to Picou, not being able to attend the homecoming football game due to new limitations was an eye-opening experience.

She said, “It is frustrating. I could always walk to football games before, but now I can’t. I pulled up and wondered ‘where is all the handicapped parking?,’ and they told me I had to pay $25 to park in it. I had just paid $50 for one three-month supply of medication, and I’m taking 10. You want me to pay $25 to park for a football game? For the average student going to an event, you don’t really have to worry about the same things.”

The more Picou navigated university life with dysautonomia, the more she encountered new obstacles, such as being unable to go to work when the elevator was out of order.

Picou’s experiences made her recognize a greater need for accessibility, and now she is dedicated to enhancing the quality of campus life for others.

“I’m working on a plan to model other campuses. LSU has a handicapped lot, and it’s only for students who have a handicap tag, and they park in that lot and there’s a shuttle that takes them from that lot, to the door and back. We have the LionTraxx buses, and we have the parking spaces, so I feel like that’s something SGA can do.”

Picou also started the podcast “Living Chronically” on Spotify. The podcast has become an outlet for her and provides a platform to connect with other people with dysautonomia on campus.

According to Picou, the mental health aspect of chronic illness is a dialogue that is not often had.

She said, “No one tells you when you get a chronic illness that your mental health will plummet with your physical health.There’s so much grief. It’s like the old you died, and you’re grieving her. I was grieving the things I couldn’t do anymore. Raising awareness about the physical side is important, but we also need to raise awareness about the mental side.”

Picou also hopes to start a campus support group for students with chronic illnesses and invisible disabilities. Picou does not want to lose sight of her primary purpose in her new initiatives.

“I don’t care if I reach 100 billion people. If I can reach one or two people on this campus who are going through it and make them realize they’re not alone, that is everything,” she said.

Picou knows all too well the importance of having a companion. She found one of her greatest companions earlier this year when she took home her service dog Bruno.

Bruno is a rescue who is undergoing training to assist Picou with her daily needs, and they are now known around campus as the duo “Baileigh and Bruno.” He has stayed by Picou’s side and even competed alongside her in the Miss Southeastern pageant.

Picou said she instantly knew that Bruno was meant to be hers.

“I saw his eyes, and I was sold. Bruno is so sweet, and having him, I just feel so much safer. He’s made me so fearless,” she explained.

Picou has kept her fearless drive throughout her journey, but she wanted to remind everyone she is human at the end of the day. Her biggest piece of advice is to never judge a book by its cover.

She said, “People can look at me, and will think I’m fine. No one would know unless I told them because so many chronic illnesses are invisible. Just because somebody looks okay, does not mean they are. If you know someone who has a chronic illness, learn about it, read about it and try to understand it. People being understanding and aware of what people are going through, and being kind, that is the most important thing.”