The fight for equal rights in “Mrs. Whitman’s Words for Women” 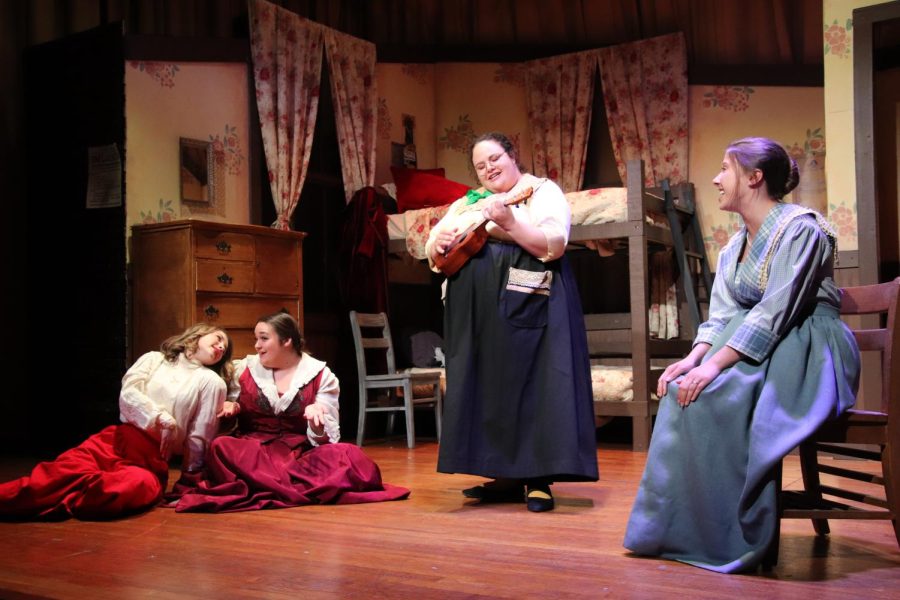 The cast of "Mrs. Whitman's" performing a musical moment in the play. "Mrs. Whitman's Words for Women" will be playing April 7-9 at Reimer's Theater.

“Mrs. Whitman’s Words for Women,” directed by Dr. Anne-Liese Fox, will be showing at 7:30 p.m. from April 7-9 at Reimers Theater with free admission to all.

Chicago-based playwright Shayne Kennedy was the winning playwright for Southeastern’s 2021 Inkslinger Playwriting Contest. For over ten years, this contest has awarded playwrights a full production of their unpublished play.

Kennedy will be giving a post-show talk on opening night for those interested in her discussion of “Mrs. Whitman’s.”

Along with Kennedy’s opening night discussion, there will be an exhibit in the lobby titled “Determined to Rise: Commemorating 100 Years of Women’s Suffrage” on April 8 as well as a pre-show panel event to discuss women’s suffrage at 5 p.m.

The setting is in 1918 at the University of Michigan, where a brand new all-female dorm has been put in place. Three women’s paths cross in the Martha Cook Building, and they soon begin to discuss the inequalities they are facing as women in this time and their desire to establish their role in society.

Topics such as birth control, suffrage, inequalities in the workplace and education are discussed amongst the female-led cast and these characters want to strive for a better future for themselves and women.

Fox noted that essentially, “Mrs. Whitman’s” will help the audience understand how strong the opposition to women’s equality was and how constrained women’s choices were in 1918.

“The young women in this play have different dreams, but they are determined to rise above obstacles and constrictions. I think that struggle is universal. Specifically, I think this play unpacks and makes more tangible for us the efforts women made before us. I personally feel that debt working on this play and realize how much of a leg up I had on the path so that I could pursue an education and strive for a career of my choice,” Fox said.

Fox also mentioned that she has enjoyed watching and working with the actors find their own way with their individual characters and developing their stage relationships with each other.

One of the actresses, freshman theater major Keeley Slaton, had a great time working on this show and is excited to finally perform it this week.

“The rehearsal process has been very fun, but exhausting. However, my amazing cast members made those long nights much more enjoyable,” Slaton expressed.

She said she really enjoyed seeing the show go from table reads, to run throughs and now tech week; it has just made her that more thrilled for the show to open.

Freshman English major Anthony Lavine, the only male actor in the cast, shared how he has enjoyed working with the cast and becoming “one of the girls,” as said by one of his castmates.

“The cast works well together and has proven in rehearsals that we are able to pick up after a stumble quite gracefully. Being the only guy in the show was certainly something that took adjusting. Over time though, we all became quite adjusted to one another and I feel fully integrated into the group as if I’m no different than any of them,” Lavine commented.

Like Slaton, Lavine added he is nervous but confident in his castmates in performing a great show.

While the show does take place in an earlier time when women were constricted in some regards, “Mrs. Whitman’s” can still ring relevant to today’s world for those who come and see the show.

According to Slaton, people should see this show because, “Not only does this show have an incredibly talented cast, but it also has an incredibly important message. It is just as relevant in 2022 as it was in 1918.”

For those interested in seeing “Mrs. Whitman’s Words for Women”, Reimers Theater is located downtown at 305 E. Charles St. and the doors will open at 7 p.m.