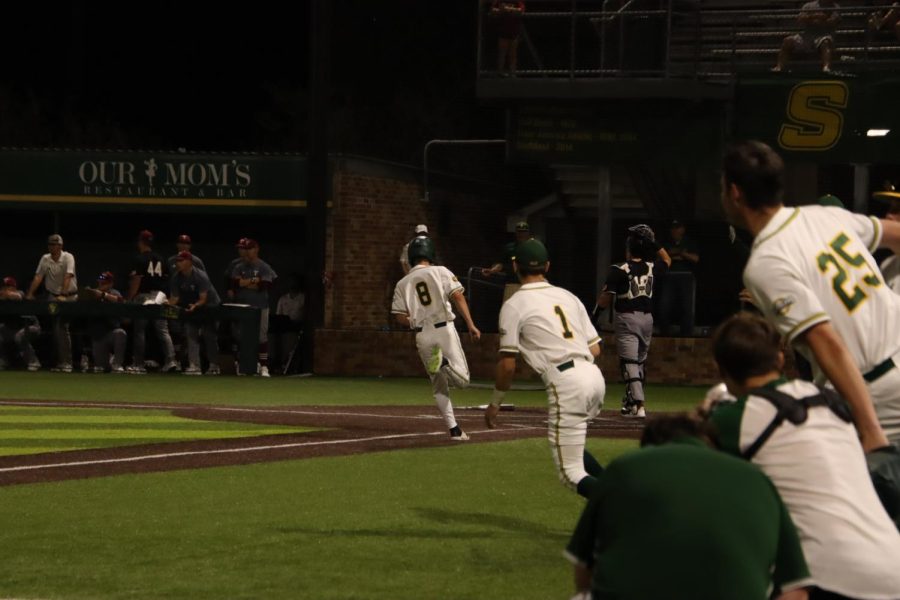 Pinch runner Joe Delaney crosses home plate on Tyler Finke's walk-off single as the dugout nears eruption after the Lions 5-4 come from behind win vs Troy on Wednesday night (April 6).

Southeastern came into this one at 10-18 coming off a series win over UIW in San Antonio at the weekend. Troy was 18-9 with sweeps over Indiana and ULL to note earlier in the year.

The visiting Trojans started off the evening with a bang as leadoff batter Jesse Hall turned on a first-pitch fastball, cranking it over the wall in left field to give his side a one run lead.

1-0 would remain the score until Tristan Welch hit a solo home run of his own going opposite field to right center in the bottom of the fifth to level the ball game. Rigsby Mosley would subsequently be relieved of his mound duties a batter later lasting 4.2 innings while surrendering just one run on two hits to go along with five strikeouts.

Troy would instantly respond in the top half of the sixth inning. After Kyle Mock’s leadoff single, Trey Leonard blasted a two-run shot to right field as the Trojans regained the lead, 3-1.

Andrew Landry came in relief getting out of the sixth but surrendering two straight two out singles sandwiched by a wild pitch allowing William Sullivan to cross home plate from second base off of Mock’s RBI hit. This would make the score 4-1 in favor of Troy.

The margin remained at three going into the Lions last at bat with SLU mustering just two hits and a single run in eight innings of play. Kyle Gamble and Ryan Pettys had combined for 3.1 innings pitched without allowing a run out of the pen up until this point.

Closer Judson Hershiser took the rubber for the Trojans to start the bottom of the ninth and walked Shea Thomas after a full count. Coach Skylar Meade had seen enough and pulled Hershiser after just one batter faced, opting to go with alternative closer Marquez Oates.

The senior pitcher, Oates, had given up just 6 hits in 17.2 innings of action all season coming into the game.

Designated hitter Champ Artigues moved Thomas over to second with a ground ball to first base. Tristan Welch then picked up his second RBI on the night with a single up the middle to score Thomas from second making it a 4-2 contest.

Pinch hitter Pierce Leavengood came up big stroking a double to center field advancing Welch to third and himself to second. Christian Garcia followed suit with an infield single making it a one run game with runners on the corners.

Evan Keller was hit by a pitch to load the bases before Rhett Rosevear hit an infield single of his own to tie the game at four runs apiece.

Up came Tyler Finke with the bases juiced, one out, and a tie ball game with a chance to win it for SLU.

“There was only one out so you’re just trying to get something that you can hit in play. With my speed a double play ball is not really in effect so I was just looking for something to drive hard into the ground and give my guys a chance to score,” said the senior center fielder.

Finke delivered, hitting a line drive single over the shortstops head to lift his team to victory.

Southeastern moves to 11-18 on the year after this dramatic come from behind walk off win and picks up its third straight W after nine straight losses following the Lions stunning upset of number one Ole Miss back in mid-March.

“It’s a resilient bunch. On the outside people may look at the record and have some doubts but these guys don’t. They’ve done a good job of sticking together… Now we’re starting to believe again. We got the monkey off our back at Incarnate Word and did a great job here tonight with this comeback win which gives us a lot of confidence moving forward,” said head coach Matt Riser on the status of his team after SLU’s big 5-4 triumph over Troy on Wednesday night at Alumni Field.

Next up on the schedule for Southeastern is a home conference series vs Texas A&M Corpus Christi in Hammond with games taking place at 6 p.m. Friday, 2 p.m. Saturday and 1 p.m. on Sunday.