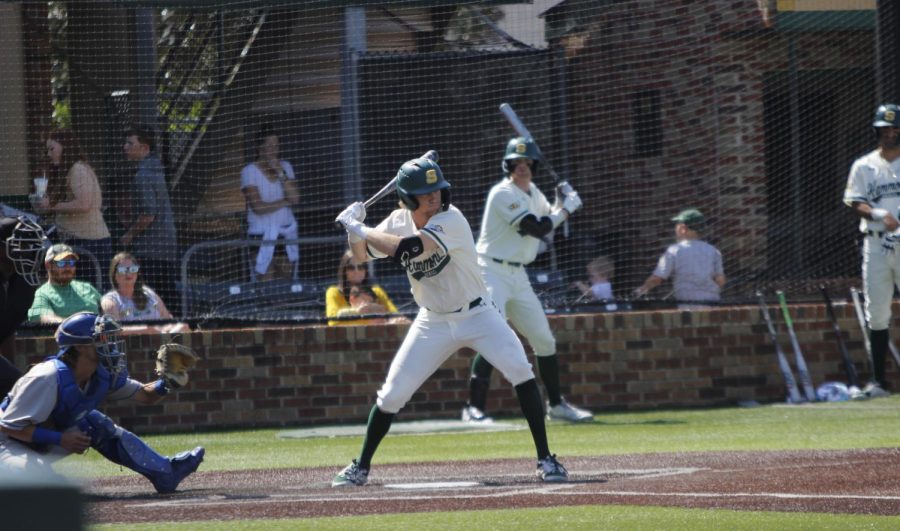 Southeastern baseball continued its resurgence this past week starting on Wednesday with a dramatic win over Troy at Alumni Field.

Trailing 4-1 going into the bottom of the ninth, SLU pushed four runs across the board punctuated by senior center fielder Tyler Finke’s walk off single with the bases loaded and one out.

After the 5-4 victory vs the Trojans, the Lions dropped game one of their Southland Conference weekend series against Texas A&M Corpus Christi in Hammond, 18-4. However, the Green and Gold bounced back to win the series by taking games two and three, 12-9 and 7-3 respectively.

The nine-game losing streak seems to be in the rearview as Southeastern has won five of its last six since the long skid. Next up is a tough road bout with No. 11 Southern Miss in Hattiesburg on Tuesday before UNO comes to town for the weekend.

SLU took on preseason conference favorites McNeese State at the weekend in Lake Charles. The Lady Lions took game one from the Cowgirls 6-1 but lost games two and three, 4-0 and 9-3 to lose the series.

ULL comes to North Oak Park on April 12 at 6 p.m. for a midweek showdown where Southeastern’s annual Flood the Field promotion will take place. The first 150 students to enter the stadium will receive a free T-shirt and food.

The tennis team split their two matchups this week losing to UNO 7-0 in New Orleans on Saturday but beating Alcorn State 4-1 in Mississippi on Sunday.

The Green and Gold lost to the Braves 4-3 back in February in Hammond and avenged their defeat moving to 3-15 on the year.

Southern will come to the Southeastern Tennis Complex on April 12 at 4 p.m., representing the ladies’ final game of the season before the Southland Conference tournament on April 22-24.

Beach volleyball traveled to the Sunshine State for the Jacksonville tournament going 1-3 over the two-day stretch.

SLU lost to North Florida 4-1 on Friday but did throttle Jacksonville 5-0.

Saturday was a different story as the hosts got their payback 3-2 and North Florida won yet again, 4-1.

Next on the docket is a trip to the state capitol where the Lady Lions will take on the likes of Central Arkansas, Nicholls, UNO and LSU for the “Battle on the Bayou” tournament April 15-16 which will be the squad’s last one of the season before their conference tourney the following weekend in Houston.

Track and field was off this week as they rested up in preparation for Strawberry Relays on April 16 but a few individual performances from two weekends ago should be noted.

Stevic posted a leap of 7-1.5 (2.17m) to place first in the high jump out of all participants in Hattiesburg. The sophomore Serbian sensation moves into the top ten in the nation for the event and will be looking to repeat as the Southland outdoor high jump champion in May at conference.

Golf was also off this week as they prepare for the Southland Conference tournament in McKinney, Texas on April 24-26 but showed out with an outstanding performance at the Ellendale Collegiate tournament in Houma two weeks ago.

Southeastern placed first overall out of 13 schools shooting -5 as a team beating out North Alabama by one stroke. The victory was SLU’s second of the season.

Senior Logan Kuehn won the individual title with a score of -6.