Denim Day: A day for survivors 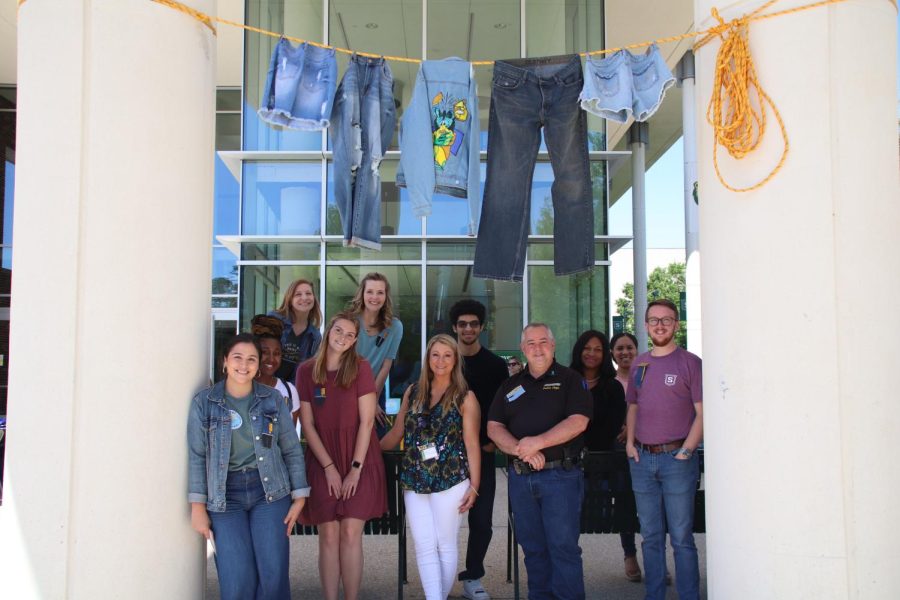 The CARE team stands and poses near their tabling event on campus on April 25. The denim clothing hanging above them is a symbol of breaking the silence for sexual assault survivors.

The CARE team hosted a Denim Day celebration on campus on April 25 near the Union and memorial fountain from 11 a.m. to 2 p.m. This day is an event where people wear denim apparel to raise awareness by educating others about sexual violence and fighting for victims.

Antoinette Alack, Student Advocacy and Accountability assistant director, said, “Since 1999, wearing jeans on Denim Day has become a symbol against destructive attitudes surrounding sexual assault that blame victims for the assaults perpetrated against them. The Denim Day campaign was originally triggered by a ruling in the Italian Supreme Court, where a rape conviction was overturned because the justices felt that since the victim was wearing tight jeans, she must have helped the rapist remove them, thereby implying consent. The following day, women in the Italian Parliament came to work wearing jeans in solidarity with the victim. Denim Day always takes place in April, which is recognized as Sexual Assault Awareness Month (SAAM).”

Alack said LaFASA holds a Denim Day Celebration and fundraiser each year to support survivors, but this was the first year that Southeastern has offered the jacket design contest for a deserving student artist. CARE invited students to submit a design for a chance to have their artwork featured on one of the silent auction donor jackets. Once the team selected a design winner, the student received a denim jacket to paint.

The winner of this year’s design was Ashton Williams, a sophomore art major. Williams said that her jacket design art style is neotraditional, meaning it has hard bold lines and is somewhat simple, but also still somewhat realistic.

The overall message in Williams’ design is no matter what has been done or how broken you may be from it, you will emerge strong and beautiful. She picked certain pieces to incorporate into her design to indicate a broken silence for sexual assault survivors.

“The handprint on her face is a symbol seen in many art forms that deal with assault and would help signify the cause without being too direct. The butterfly is to signify the beauty and the color of the butterfly is the same color as the ribbon used for sexual assault awareness,” Williams said.

The triangle was used for contrast to the other colors and the leaves were decoration.

She said, “I wanted to break the silence this way because I have personally been a victim of sexual assault and it’s a very hard thing to overcome. There is so much negativity that is brought with it and for me, art has always been a way to cope and did help me a lot when it happened to me, so I used what I love and what I’m good at which helped me cope and help spread the awareness.”

Survivors stand strong and persevere but in time. Williams expressed the importance of finding a support system of people who are willing to help and listen.

Williams said, “The things that have happened to you do not define you; you are still you and as strong and as beautiful as ever. Although it may feel like they have taken a part of you and that you may never be the same you will be, one day it will get easier and you will emerge stronger than ever before. There are people who do care about you and your story is worth being heard.”

The Denim Day event on campus had a dog parade as well as tabling and activities like making a Denim Day pin. Students were able to create a pin from jean swatches, hot glue and scissors which were provided at the table.

LaFASA hosted a Denim Day Banquet in Baton Rouge at the BRQ: the Backyard that same Wednesday.

“LaFASA holds a celebration annually to support survivors and to raise funds to keep the organization operating. All services are free to the public and offer support services to survivors,” Alack said.

Williams’ design was featured at the silent auction during LaFASA’s annual fundraiser.

Alack stated the importance of having fun while being safe.

“Campus Assault Response and Education Team cares about you. Your safety matters and you should have fun without fear, but to do so you must educate yourself and be proactive with your safety. Always know that you can reach out to us for assistance and to learn more about where to report encounters or just want someone to talk to, please reach out to one of our campus resources. Become familiar with our Title IX office and become more familiar with your student rights and policies by viewing the Student Handbook at southeastern.edu/studenthandbook,” Alack said.

For campus incidents, please reach out to authorities by reporting to www.selu.edu/reportit. To get support or find out more information about sexual violence and how to stay safe, please go to LaFASA.org or RAINN.