The Lion's Roar • May 3, 2022 • https://lionsroarnews.com/28462/kelley-and-givan-sign-for-nfl-squads-as-udfas-wilson-jr-receives-mini-camp-invite/sports/ 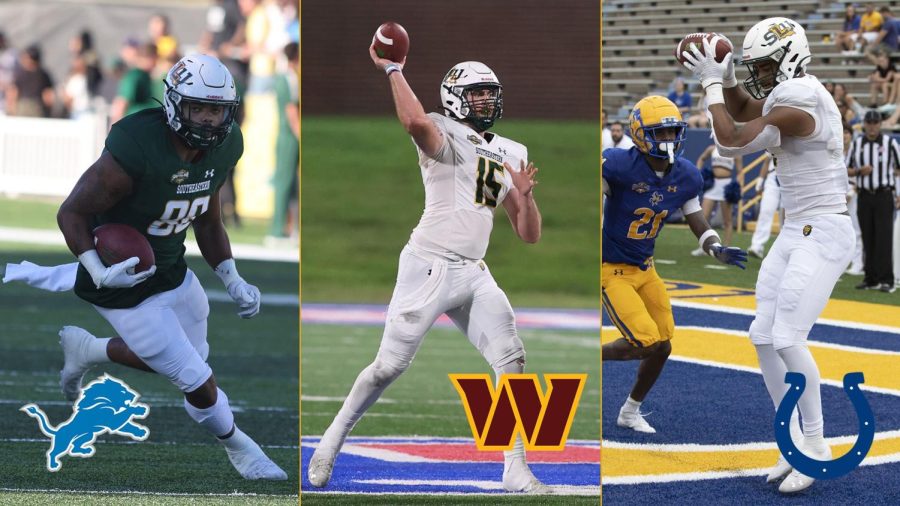 During his time at Southeastern, Quarterback Cole Kelley accumulated a laundry list of achievements. The newest member of the Washington Commanders was named Walter Payton Player of the Year in the Spring 2021 football season (2020 season pushed back due to COVID-19), the equivalent of the Heisman trophy in the FCS.

Kelley also won Southland Conference Player of the Year in the Fall 2021 season along with Louisiana Offensive Player of the Year. The decorated signal caller leaves SLU as the program’s all time leader in passing yards (8,602), passing touchdowns (72), rushing touchdowns (33) and total offense as well as boasting the highest career completion percentage (72.2%) in FCS history.

The Lafayette native was invited to the NFL combine and performed well following his senior season in which he led the FCS in total passing yards (5,124) while averaging over 400 yards a game through the air.

One of Kelley’s top weapons from last year was tight end Nolan Givan. The fifth year senior transfer will return to play professional football in his home state of Michigan for the Detroit Lions.

Givan, a native of Berkley, Mich., played his first three years of college ball for Ball State before transferring to San Diego State for his fourth season. The 6’3 260 pound tight end enjoyed his fifth and final season in Hammond, America where he set single season career marks in receptions (56), receiving yards (572) and receiving touchdowns (6) good for second on the team behind Austin Mitchell in all three categories for the high powered Lion offense of 2021 (45.1 ppg/1 in FCS).

Wilson Jr. suited up for two seasons in the Green and Gold, finishing his tenure with 31 catches for 398 yards and six touchdowns playing at wide receiver.

After transferring from the Aztecs of San Diego State, Wilson Jr. struggled to stay healthy as a Lion but will look to reach his full potential at the next level.