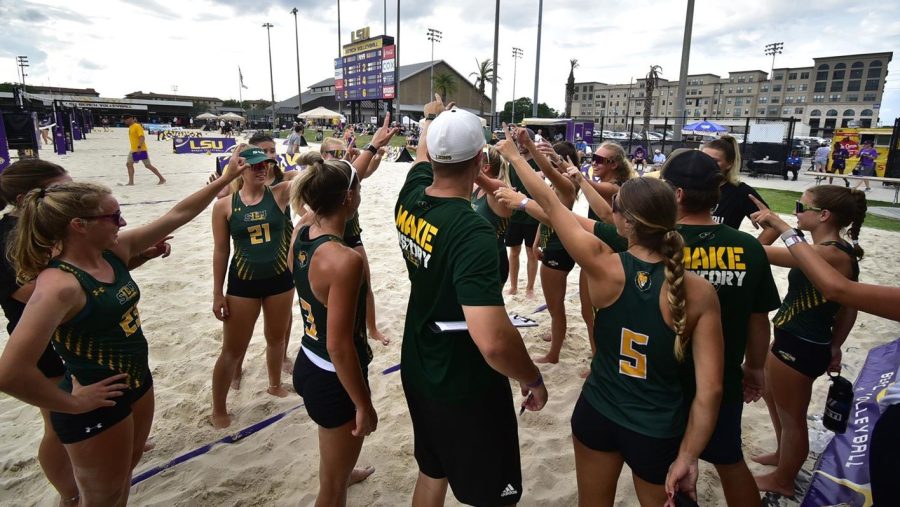 Southeastern’s golf team stole the headlines in this version of “Last Week in Sports” with their triumph in the Southland Conference tournament (April 25-27).

Baseball was unable to knock off its third top-three ranked opponent of the season last Tuesday, as the team fell 9-4 at Alumni Field to No. 3 Southern Miss.

The Lions did bounce back over the weekend by taking two out of three from Northwestern State in Natchitoches to draw within two games of leaders Nicholls, McNeese and Houston Baptist, which all sit at 11-7 in conference play.

SLU used a four-run ninth inning in a come from behind game one victory, winning by a score of 6-4. Game two again went the green and gold’s way, 4-2, before NW State took game three 5-2.

Southeastern is now 9-9 in conference (19-25 overall) with two Southland series remaining, starting with Houston Baptist this weekend in Hammond. A trip to Baton Rouge to take on the #14 ranked LSU Tigers looms on Tuesday and will be followed by a trip to Thibodaux to take on Nicholls State in the season series finale.

Softball endured a disappointing weekend, losing two out of three on the road vs. Texas A&M-Corpus Christi. The Lady Lions were blanked 7-0 in game one but did respond with a 6-2 win in game two of Friday’s doubleheader.

Saturday’s game was the deciding match; the Islanders thwarted an SLU comeback attempt winning 7-6 in walk off fashion to take the series.

Southeastern is now 11-4 in conference (34-14 overall) and is one game behind McNeese, which is in first place at 12-3 going into the final series of the regular season.

The ladies will take on third-place Northwestern State on Friday in a double header and again on Saturday. The Lady Demons are currently 10-5, setting up a dramatic grandstand finish going into the Southland conference tournament which starts on Tuesday, May 10.

Track and Field showed out for the home crowd at Southeastern Strawberry Relays on April 16, the first weekend of Spring Break.

Freshman Katrine Olsen set a facility and school record (5-11/ 1.80m) in the high jump, besting the previous record which had stood since 2004. Olsen ranks eleventh in the NCAA East Regional qualifying standings following her tremendous performance.

Kristian Jackson placed first in the discus (169-9/ 51.74m) to keep her top spot in the Southland. Lara Zupanc came in second in the pole vault with a personal best (12-3.5/ 3.75m), putting her at fourth overall in conference on the year.

For the men, Gerson Pozo ran a 47.22 time in the 400m to take first while Agerian Jackson clocked a 51.64 time in the 400m hurdles. Pozo now sits at fourth in the Southland standings for his respective event, while Jackson is in second.

The track and field team also participated in the LSU Alumni Gold event on April 23 in Baton Rouge two weekends ago. Jackson again was a top performer setting a career high mark of (15.39m/ 50-6) in the shot put.

Jackson remains at first atop the conference in discus while also owning second in both the shot put and hammer throw. The Southland Conference outdoor championship will be hosted in Humble, Texas Friday through Sunday (May 6-8).

Beach volleyball finished up its season a couple weekends ago in Houston, going 1-2 in the SLC tournament and ending its season with a record of 12-21. SLU defeated Nicholls 4-1 but lost 4-0 and 3-0 to Texas A&M-Corpus Christi and tournament host Houston Baptist.

Four pairs of Lady Lions represented on the Southland All-Conference team. Avery Carrol and Linsey Sackett along with Mabry Ward and Eryn Wilks made the second team while Jolie Hidalgo/Meagan Scuderi and Hannah Barosh/Michelle Mirarchi filled out the third team.

Tennis concluded its season two Fridays ago on April 22 after being eliminated from the conference tourney in the first round in a loss to Northwestern State, 4-0. The team finished 3-16 overall in a forgetful injury plagued campaign.