The Lion's Roar • May 10, 2022 • https://lionsroarnews.com/28542/lions-baseball-sweeps-the-huskies-in-the-final-home-series-of-the-regular-season/sports/ 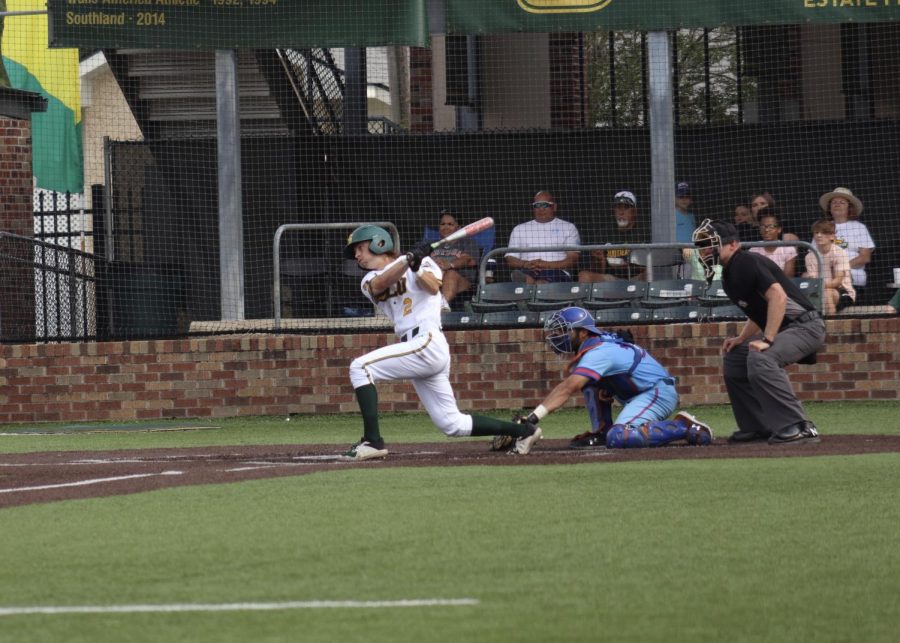 Senior Tyler Finke takes a swing during the Lions' weekend sweep of the Houston Baptist Huskies.

SLU baseball won their series against Houston Baptist, winning 6-5, 18-15 and 12-0, which completed the conference matchup sweep at Alumni Field.

The Lions’ offense showed out the May 6-8 matchup, with successes at the plate putting SLU ahead in all three games, including a walk-off home run in game two, moving the Lions to a first-place tie in the Southland Conference regular-season standings. They are tied with McNeese State at 12-9.

A Faulkner sac fly in the third put the Lions up 4-0 for the time being. After surrendering four straight runs to HBU, second baseman Rhett Rosevear doubled to bring in an RBI, while center fielder Tyler Finke’s sacrifice fly raised the Lions’ tally to six runs. The team held on to win by a score of 6-5 in game one.

Freshman pitcher Adam Guth earned his third win of the season after throwing for five innings and allowing four runs on seven hits with four strikeouts during his outing.

Although game two was action-filled, the Lions were unable to score until the bottom of the fourth. Then Finke hit a single, allowing Rosevear to score and Thomas brought in Finke for an RBI, which resulted in the Lions’ first two runs of the game.

In the bottom of the fifth, the Lions gained six more runs. Left fielder Tristan Welch scored the first run while outfielder Christian Garcia tripled to right-center field, bringing in a run. Next, catcher Bryce Grizzaffi singled to left field to score Garcia before shortstop Evan Keller advanced to third and Grizzaffi scored off a passed ball. Keller then scored through Finke’s triple to left field. Next, Faulkner had an RBI single to left-center field, scoring Finke. Faulkner also scored the last run in the bottom of the fifth after a Shea Thomas sac fly.

The Lions’ scored three runs in the sixth inning, bringing the score to 13-4; however, the Huskies rallied in the seventh inning, scoring 10 runs and gaining the lead, with an additional run in the eighth adding to the potential successful comeback.

After RBIs by Faulkner and Finke in the eighth inning, SLU entered the bottom of the ninth tied 15-15. Thomas stepped up to bat with two on base and delivered a home run to left field, resulting in three runs by bringing home first baseman Preston Faulkner and centerfield Tyler Finke for the walk-off win, 18-15.

In game three, pitcher Andrew Landry became the 21st one-hitter in Southeastern baseball history, pitching for all seven innings and throwing seven strikeouts for the Lions.

Faulkner led SLU at the plate with one run and four RBIs, as every player except one in the starting lineup scored, hit or had an RBI in the 12-0 seven-inning game three victory.

Southeastern also celebrated senior day and the accomplishments of the team’s seniors during the pre-game to game three on Sunday, May 8. Seniors Tyler Finke, Connor Manola, Gage Trahan, Nick Ray, Grant Upton and Hunter O’Toole, have contributed heavily to the success of Lions’ baseball, so their tenures were recognized in game two.

SLU has its last midweek game against the 14 ranked LSU Tigers in Baton Rouge on Tuesday, May 10. Then, the Lions will travel to Thibodaux for Southeasterns’ final weekend series against the Nicholls State Colonels on May 12-14 to have a chance to take the Southland regular-season title.