The Lion's Roar • May 10, 2022 • https://lionsroarnews.com/28566/lions-claim-four-titles-on-final-day-of-outdoor-championships/sports/ 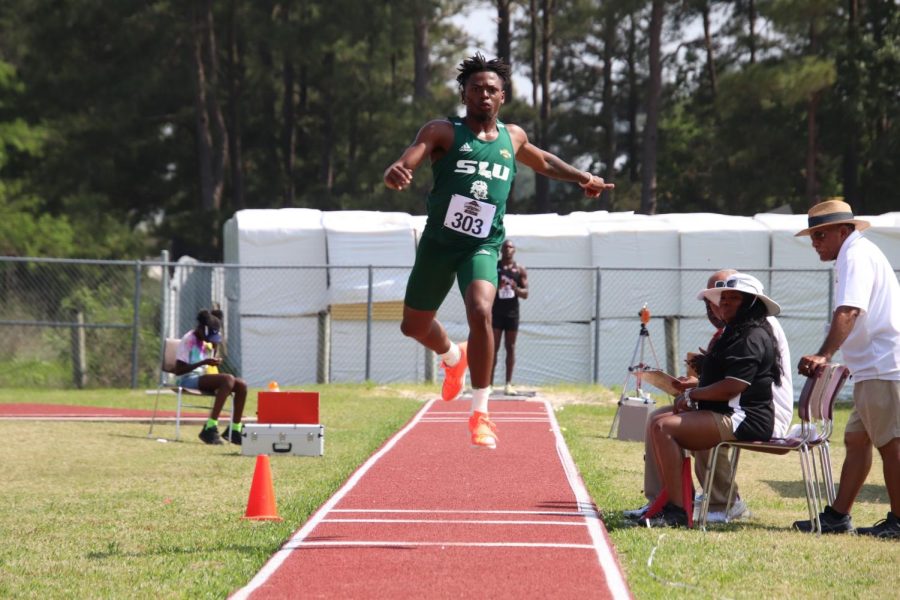 Wjuantereuas Rodrigue leaps through the air to set Southeastern record in long jump.

Lions track and field began its outdoor postseason schedule this weekend with the 2022 Southland Conference Outdoor Championships in Humble, Texas.

Agerian Jackson, Gerson Pozo, Eugene Omalla and D.J. Morton made up the 4×400 men’s team. The team made it to the top of the podium by crossing the line at 3:08.62, just one second ahead of second-placed McNeese State.

Kristian Jackson capped off the weekend by winning the women’s discus throw, with her best throw measuring at 164-4 (51.02 meters). She completed the weekend with runner-up positions in the hammer throw and shot put totaling 27 points.

Stevic became the 2021 Southland Outdoor champion in high jumps yet again, defending his title by hitting a personal best of 7-1.5 (2.18 meters).

Agerian Jackson entered Sunday and advanced by setting a personal best of 51.28, winning in his respective event.

SLU men placed fourth as a team for the Southland Outdoor Championships with 109 points total.

The remaining players look to continue the fight for the Lions at the NCAA Outdoor Preliminaries in Bloomington, Ind. May 25-28.