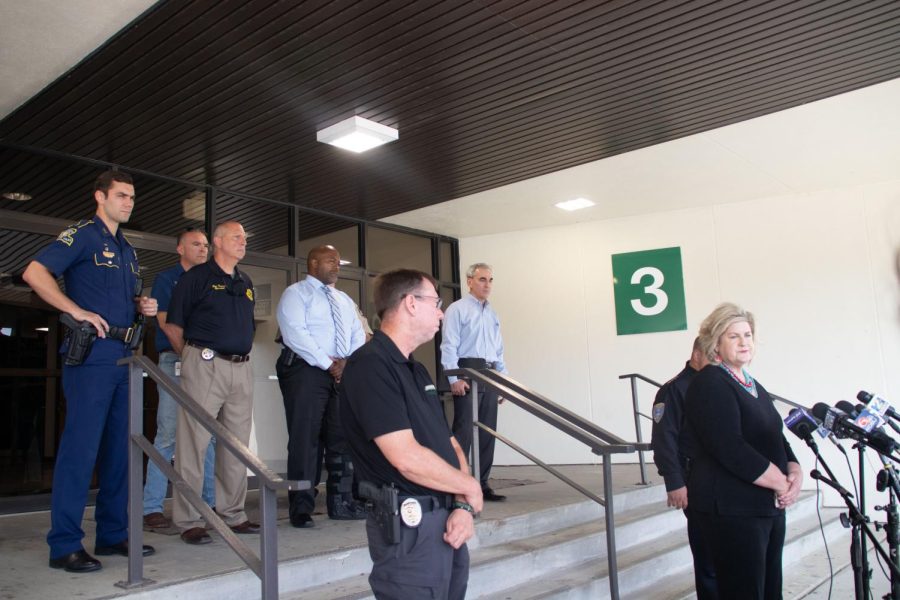 Melissa Stelly, superintendent of the Tangipahoa Parish School System, addresses the media during a press conference held Friday, May 20, at Gate 3 of the University Center to address information regarding a shooting during Hammond High's graduation that was held Thursday night.

A shooting incident occurred at the University Center last night on May 19 following Hammond High School’s graduation ceremony, injuring four people. In a press conference today on May 20 at 11 a.m., police announced the shooting could be gang related, but it is not guaranteed.

It is believed there were at least two shooters, Trent Thomas and another juvenile, who were not in alliance with each other.

Chief of Hammond Police Edwin Bergeron Junior said there was an altercation between the suspect in custody and another group of people. The police refused to say the name of the juvenile in question.

Thomas, a 20-year old and alum of Hammond High, has been taken into custody as a suspect.

The suspect was charged with three counts of attempted second degree murder, possession of firearm on campus and obstruction of justice.

Chief Bergeron said he believes there will be more arrests as they continue the investigation.

The guns used were said to be hand guns. The crime lab is collecting data from the evidence and will report their findings to UPD.

Three people were shot during the incident and a fourth was injured while trying to escape the scene. Those who were shot were released from the hospital and the fourth remains in stable condition. The victims of this shooting had no affiliation with the perpetrators.

There are three graduation ceremonies set for this weekend, with one beginning tonight at 7 p.m. in the University Center.

Chief of University Police Michael Beckner announced a new protocol, which will allow families and friends to only carry a phone and camera into the UC. All bags must be left in vehicles. This protocol will remain for the rest of the year.

Beckner said there will be police present at the upcoming ceremonies and they are looking into metal detectors for future events.

“Graduation is a very special time for seniors and their families, and it was very sad that it ended in a very violent way for the graduates, their families and our faculty. We want justice to be served,” she said.

Stilley added, “I want us to remember and to pray for the families, the victims and everyone who was impacted.”

This story will continue to be updated as more information regarding this ongoing investigation becomes available.