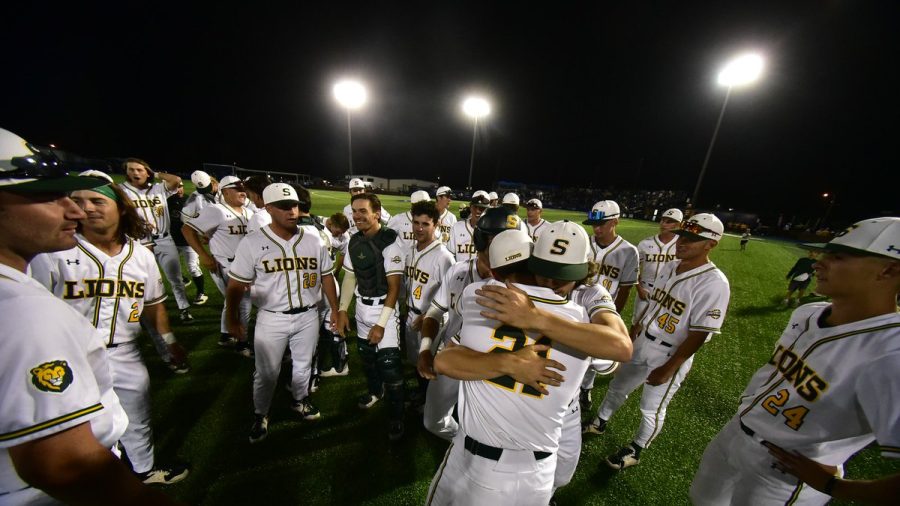 The SLU Lions baseball team celebrate their special victory over the McNeese Cowboys.

The SLU Lions have won the Southland Conference baseball tournament championship for the second time in school history since 2014, winning the series 2-1 over the McNeese State Cowboys on May 26-28.

The Lions lost game one 6-5 in twelve innings but didn’t give up, netting back-to-back wins, 3-2 and 11-7, to win the championship for Southeastern.

Freshman pitcher Adam Guth started on the mound in game one, pitching four innings while allowing two runs and three hits to the 19 batters he faced.

First baseman Preston Faulkner led SLU with three hits and three RBIs in an attempt to rally the Lions. However, an extra-inning affair went McNeese’s way after pinch hitter Peyton Johnson hit a sac fly to earn the Cowboys a game one victory after twelve innings of play.

The extra-inning loss appeared to be a learning experience for the Lions, with Southeastern responding for a comeback win in game two. Right fielder Christian Garcia’s quick eye led to a ball four, subsequently walking the full bases and bringing in Faulkner in the bottom of the ninth to win the contest for the Lions.

Pitcher Andrew Landry threw for 5.2 innings in game two, allowing just two runs to set up Daniel Dugas in relief. After that, Dugas shut the door on the Cowboys, pitching 3.1 innings while allowing four hits and, most importantly, zero runs.

With the series tied 1-1, it all came down to a game three rubber match to decide the winner of the Southland conference tournament. The Lions came out hot as consecutive RBI doubles from third baseman Shea Thomas and center fielder Tyler Finke helped put Southeastern up 3-0 and set the tone for the championship-deciding game.

The Cowboys did not give up, scoring three runs in the ninth to attempt a comeback, but pitcher Gage Trahan closed the game out for Southeastern to preserve the Southland Conference championship win.

Hammond’s Southeastern Lions will look to make some noise in their first NCAA tournament appearance since 2017 as they take on the No. 1 seeded Auburn Tigers in the second game of the Auburn Regional. The first pitch will be at 6 p.m. this Friday, June 3, at Plainsman Park in Auburn, Ala. The game will be televised on ESPN+.