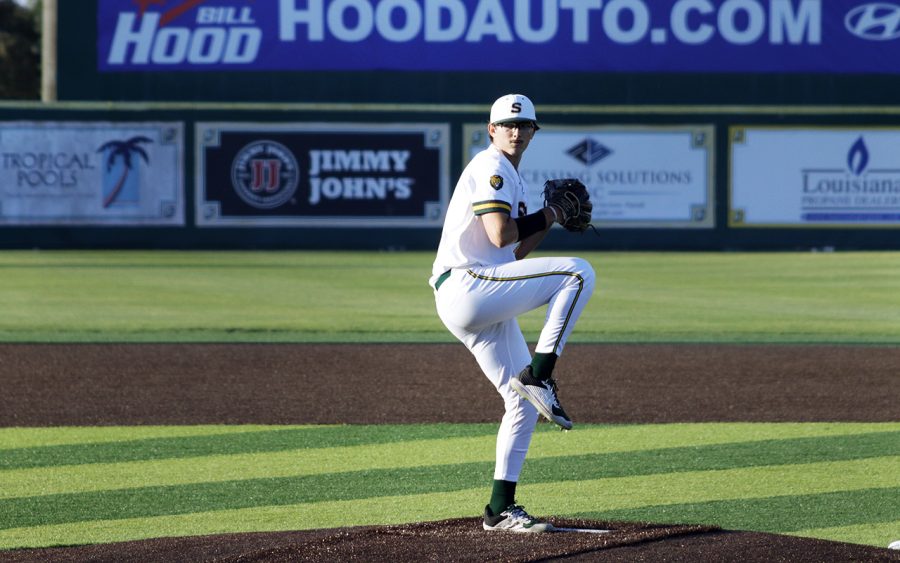 Adam Guth, freshman pitcher and Lake Charles native, winds up his pitch for the number one ranked Ole Miss batter.

Adam Guth first picked up a baseball at the age of five playing t-ball in Lake Charles, Louisiana.

Guth accredits his love for the game to his high school head coach, Glen Cecchini.

“Barbe is really run like a college university. He prepares everyone who goes through that program and most seniors go to a Division 1 school for college. I just have a lot of love for the guy,” said Guth on behalf of his former coach.

Cecchini has accounted for a plethora of wins during his 36-year and ongoing tenure with the Bucs, posting a record of 1,010-213-1 for a winning percentage of .825. Under the 2019 Louisiana High School Hall of Fame inductee, Barbe has won 25 district championships, 11 state championships, and three national titles.

Guth was a standout player during his time at Barbe, ending his high school career with a 13-1 record highlighted by a 15 strikeout performance as a senior versus Anacoco and a perfect game vs. St Louis Catholic as a sophomore.

Guth’s high school career earned him a top 1,000 ranking in the country and third best LHP in the State of Louisiana for the class of 2021.

He chose Green and Gold as the colors for his collegiate destination, and that marked his next chapter in Hammond, America.

Southeastern’s 2022 baseball season ended a couple of weekends ago as the team went 0-2 in #14 Auburn’s regional after a 30-31 overall record. The Lions won the Southland Conference tournament as Guth did his part.

The freshman lefty made 14 starts with 15 appearances over the course of his freshman campaign with a record of 4-2. Guth tossed 47 strikeouts in 59.2 innings pitched with a 6.34 ERA.

In his last outing vs Auburn, Guth struggled which skewed his ERA mightily. The Tigers are currently in the College World Series in Omaha as one of the final eight teams in the NCAA Tournament.

The 6’5 225 pounder’s best performance undoubtedly came against other SEC foe and Omaha participant Ole Miss on March 15 at Alumni Field. Making just his third collegiate appearance, Guth got the start on the mound vs the at the time #1 team in the land and helped SLU shock the nation.

Southeastern won the game 5-1 as a freshman from Lake Charles, Louisiana held the potent Rebels offense to a single run on as many strikeouts as hits (3) in 5.0 innings pitched.

“That was a crazy game. It was my first career win versus the No. 1 team in the country. It was nuts. I didn’t process it until a week later but that was by far the most fun game I’ve ever played in,” said Guth.

As head coach Matt Riser and company look onward to the 2023 season, Guth will undoubtedly be a valuable asset in the Lion’s rotation.

Southeastern will look to build upon its sixth program NCAA Tournament berth as well as its second Southland Conference Tournament Championship as Adam Guth figures to be a key part of SLU baseball’s future.