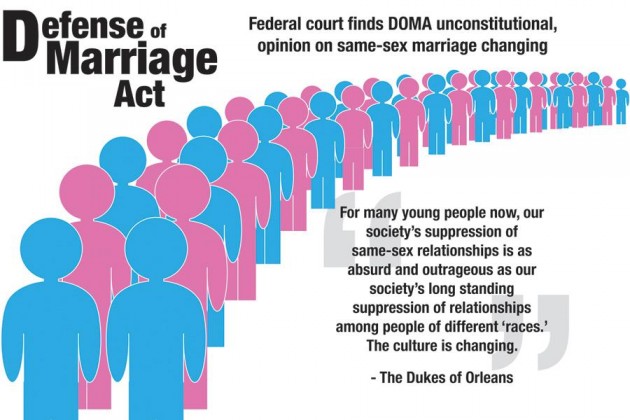 Same-sex marriage has been a longstanding issue for the U.S. ever since President Bill Clinton and Congress passed the Defense of Marriage Act (DOMA) into law in 1996.

The act defines marriage as the legal union between a man and a woman and the word spouse only refers to the opposite sex of a person in a marriage.

On Feb. 22, 2012, U.S. District Judge Jeffrey White ruled the Defense of Marriage Act unconstitutional as it discriminated against Karen Golinski and her wife. Even though Golinski was a court employee, she and her partner were denied health coverage by the government.

“The Court finds that DOMA, as applied to Ms. Golinski, violates her right to equal protection of the law … by, without substantial justification or rational basis, refusing to recognize her lawful marriage to prevent provision of health insurance coverage to her spouse,” wrote White.

“I know that, for an example, if you are in a terrible car wreck and your spouse is dying in the hospital you can go to the bedside,” said Rebecca Hensley, an instructor in the Sociology and Criminal Justice Department. “Their mother can’t, their children can’t, but you can. You’re their spouse. You could have been in a relationship with someone for 50 years and everyone in town knows it, but if they’re dying in the hospital, you cannot be at their bedside unless you are legally married.”

Hensley has taught the Sociology of Gender and Sexuality courses for a few semesters. She believes that she has learned much more about the topics of gender and sexuality through the instruction of others.

A D.C. think tank Third Way released a poll in 2011 that polled the public on “Gay Issues and Relationship Recognition.”  They found that 64 percent of those polled said that relationships between gay adults should be legal and 53 percent said that gay couples should be allowed to marry.  This was a 20 percent and 26 percent increase respectively from 1996, which was also a part of their research into how much public opinion has changed since the passing of DOMA.

A group of students on Southeastern’s campus, the Dukes of Orleans, meets weekly to discuss topics regarding the LGBTQI community.  They feel that, with all of the attention focused on DOMA, this is another part in a long-time movement for equal rights.

“Despite all the pessimism about backwards and apathetic youth in the United States, most people under 30 are reasonably sympathetic to equality in this realm,” said the group, the Dukes of Orleans. “For many young people now, our society’s suppression of same-sex relationships is as absurd and outrageous as our society’s long standing suppression of relationships among people of different ‘races.’ The culture is changing.”

The Dukes of Orleans also spoke about the repeal of DOMA and the role it may play at the state level.  With same-sex marriage licenses being issued in six states and the District of Columbia, more states are bringing these issues to the forefront.

“In other words, those social norms are already being fought within the states, and by removing the federal law which has created severe limits to how far those struggles could progress, we could possibly see an intensification of similar struggles at the state level. As for whether this repeal would lead to a state-level recognition of same-sex couples as married, we cannot be too hasty in our predictions. But the force, popularity and duration of people’s struggles from the bottom up seem to be the decisive factors any time there is a battle for liberation from systemic injustice,” said the Dukes of Orleans.

With the increase in public opinion, court rulings and states allowing same-sex marriage, the atmosphere surrounding these issues is tense, especially among party lines.  In February, Republican Gov. Chris Christie vetoed a bill passed by lawmakers in New Jersey which would have legalized same-sex marriage. Christie wanted the issue of legalizing same sex marriage decided by referendum, according to a Los Angeles Times article.  However, in the same article, a republican lawmaker changed his mind after meeting with many same-sex couples.

“Here we are following social theorist Slavoj Zizek who remarked that philosophy is a very useful tool for solving practical everyday questions,” said the Dukes of Orleans. “And when people who have been alienated from their own ability to reason clearly and discern just from unjust, they indeed find themselves in such positions of uncertainty.  What so many of us need today are good philosophy, honest conversation and the objective study of the relevant facts.”

But the issues remain. Opposition still holds that this is not an argument on civil rights, as they believe homosexuality is a choice, according to the same Los Angeles Times article. Hensley believes that it is very simply an issue of civil rights and citizenship.

“Are people who are attracted to same-sex individuals in love, do those people have a right to full citizenship in the United States, or do they not?” said Hensley. “If you are a full citizen in the land of your birth, then everything every citizen has a right that belongs to you by law. You cannot modify that. You cannot say that people with certain eye color, people in certain states, people who have college degrees or people who only speak English, you cannot decide that individuals born in the land of their birth cannot access the same rights of citizenship as everybody else.”

The Duke of Orleans expressed that the issue of same-sex marriage is more than just about another group of people, but about the lives they should be able to lead.

“It is about expanding the realm of freedom and possibility that they live in,” said the Dukes of Orleans.