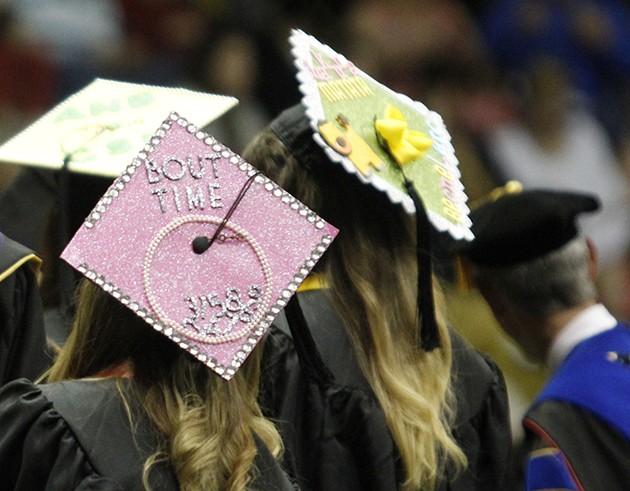 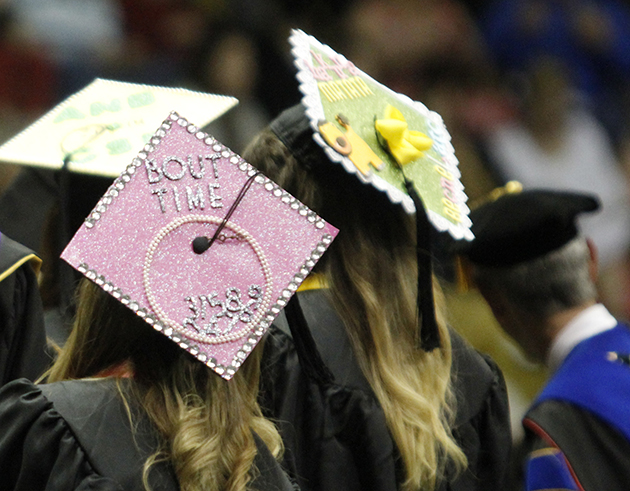 During the 2011-2012 academic year the university’s retention rate was 67 percent based on student satisfaction. Graduates at the spring 2014 commencement exercises decorated their caps in honor of the years of hard work contributed to earning undergraduate and graduate degrees. The Lion’s Roar / Sara Patrick

College can be fun and stressful. While new experiences and newfound independence are explored, stress and a more demanding curriculum are also part of the package. Not everyone can handle the pressure of college life, and many students consequently decide to drop out.

It is easy to see the correlation between the retention rate and the satisfaction many students have found with Southeastern. This begs the question, however, why are the graduation rates so low in comparison. When faced with these statistics, administrators and advisors have to ask what makes students drop out.

“[The students] may not have been prepared by their previous schools,” said psychology professor Dr. Sara Sohr-Preston. “They may only be in school because they were expected to go. College may not be what they thought it would be. Money and family obligations, for example, becoming pregnant or getting married, may become an issue.”

Sohr-Preston points out that a larger faculty could help lower the dropout rate in the area, revolving around those who drop out solely for academic reasons, such as not being able to keep up with the academic standard set by certain classes.

“Having more faculty would be a huge help,” said Sohr-Preston. “Current faculty at Southeastern are overwhelmed and have very little time to truly work on this problem. I would love to contribute to more one-on-one time with students or teach more small classes in which I get to know each student’s learning style and goals, but right now, that is impossible. Classes are getting bigger, and we are having to teach more of them while taking on more out-of-class duties as faculty size shrinks.”

In addition to academic reasons, it must be acknowledged that dropping out of college is not entirely a negative action. Some choose to drop out, not because they are struggling, but because they have discovered their dream job does not require a college degree, thus going to college would be unnecessary. Even though this can happen, it is not a common reason for going degree-less.

It was found that other causes of dropping out were family or financial trouble. Although unexpected complications in life cannot be prevented, the impact of academic performance on dropout rates can be minimalized.

Brad Bergeron, freshman advisor, noted many students who have dropped out due to academic problems did not have the proper study habits needed to excel. This could be the reason why some students struggle with maintaining the grades they need to graduate.

According to Bergeron, tweaking study habits can make all the difference for academic success.

“Students that do well are self-learners,” said Bergeron. “They take notes from their textbook and begin working on understanding the material before their teacher lectures on it. Then, class time is more expanding upon what they have already begun to understand. Some students will tell advisors that they are lazy and just don’t want to study every week. However, it is a wonderful thing to see when a self-reported lazy student begins to work harder and sees the difference in their grades. I have seen a number of probation students become 3.0 and higher students once they fixed their study structure and study technique.”

Though Southeastern’s graduation rate is satisfactory, Sohr-Preston feels there should be improvement.

“I have seen worse numbers [for graduation rates], but I would certainly like it to be higher, especially since so many students have to ultimately pay back student debt for degrees they never actually received,” said Sohr-Preston. “I am very proud of the students who make it through and represent SLU out in their careers, but increasing graduation rates would improve the reputation of the university. The plain truth is that we need more state funding so we can hire more faculty to better meet the needs of more of our students.”