The Lion's Roar • May 5, 2015 • https://lionsroarnews.com/3672/lion-nation-aids-nepal-after-tragedy/uncategorized/ 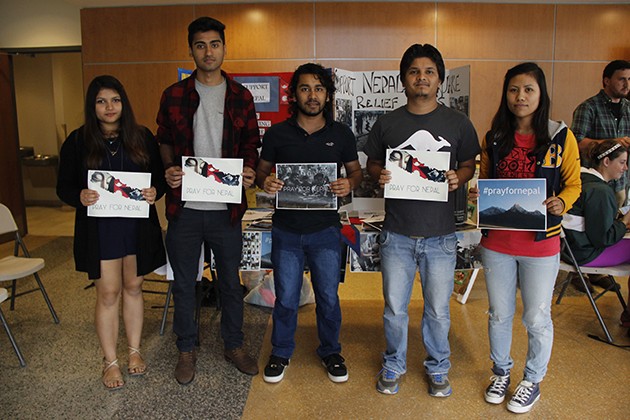 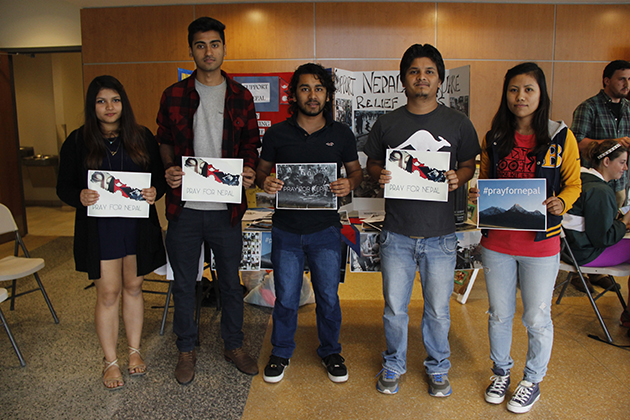 Since word spread of the massive earthquake in the Gorkha District of Nepal on April 25, international students from Nepal began fund-raising efforts in all academic departments, as well as in the Student Union, Sims Memorial Library and Pennington Student Activity Center. The Lion's Roar / Megan Ferrando

Over the April 25 weekend, news reached Southeastern’s campus of the 7.8 magnitude earthquake that shook the nation of Nepal. Throughout the tragedy, the Southeastern community has come together not only to aid those across the globe who suffered tremendously, but also to support the over 300 international students who come from Nepal.

Word spread quickly that Nepal was in need when current Student Government Association chief of staff and Nepalese native, Suraj Ayer, sent out a plea for aid to Southeastern faculty and students through email.

“Nepal does not have enough resources to fight back this sudden emergency situation,” wrote Ayer. “Hence, I want to initiate fundraising within my university to help the needy ones in Nepal. We need your support at this tragic moment.”

Many affected in Nepal are in need of food, clean water, sanitation, communication means, electricity and shelter, since many houses have been destroyed.

The lack of communication affected many of Southeastern’s students as they struggled to contact their family.

“Like every Nepalese at Southeastern, I was utterly shocked and devastated by the news. I tried to call my parents immediately but couldn’t reach them. I felt tremors inside,” said Ayer.

According to CNN, the earthquake was the worst natural disaster Nepal has suffered in over 80 years. At this time, more than 7,040 have been reported dead and nearly eight million have been affected in various ways.

“[For] most I know here, their family seems to be safe,” said junior physics major and Nepalese native Nisha Lama. “A few have had their relatives die. Some of the people have had their houses completely destroyed.”

According to United Nations resident coordinator for Nepal Jamie McGoldrick, bringing in relief materials has proved very difficult since the international airport is jam-packed. The airport has one runway and can only fit limited numbers of aircrafts.

Different humanitarian groups are attempting to provide much needed supplies, including the American Red Cross.

According to Lama, the Red Cross is one possible organization they will send all donations to.

One of multiple ways funds have been raised is through the GoFundMe page set up by Ayer. In just four days, this page alone has raised over $4,000.

Students have also set up donation boxes in multiple departments and locations around campus including the Student Union, Sims Memorial Library and the Pennington Student Activity Center. Individual campus organizations have also done their own fundraising that will go towards this effort.

The Spanish Club hosted a concert Tuesday, April 28 and donated all money raised to the Nepalese community. The concert was originally a means of raising funds for their study abroad trip, but in wake of the tragedy, the group decided to change their destination for proceeds. They will also donate all they raised at an event they had a couple weeks ago, Latin Dance Night.

The Spanish Club represents only one of many groups and individuals who have joined with our Nepalese community to aid Nepal.

“I am really grateful for everyone here because they have been so supportive. On the Saturday morning it happened, I got emails from teachers, teachers I even just took one class. Everybody has offered to help,” said Lama. “We have set up donation boxes in every department. Even one professor wants to offer personal additional help. That fact that he is going to that extent to help us, it makes me really proud to be a part of the Southeastern community because everybody has been so helpful. It’s just so nice to have people help you in the time of need.”

Donation boxes will continue to be set up in the Student Union and donations can be made online at www.gofundme.com/swvb3vc.

According to Ayer, a little can go a long way when converted from American to Nepalese currency. One dollar in American currency transfers to 100.01 Nepalese Rupee.

“I believe Southeastern is a family,” said Ayer. “We go to family in times of need and as expected, the Lion Nation stood up to help.”