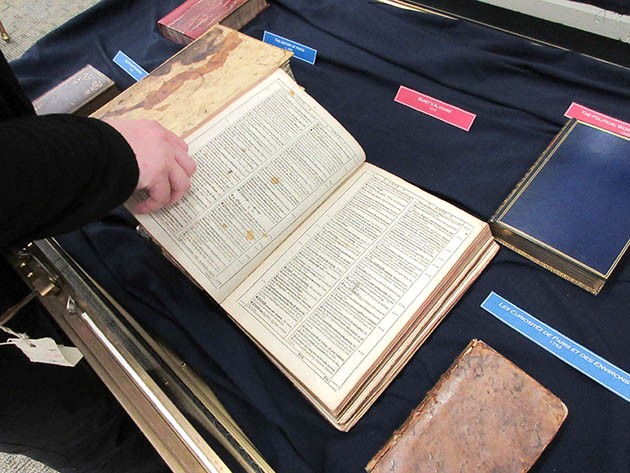 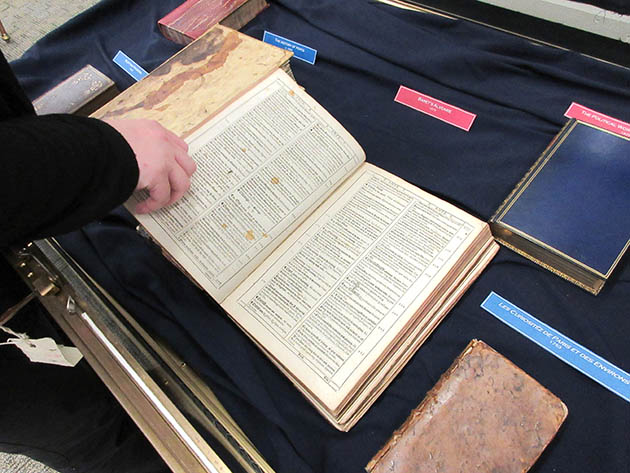 The exhibit allows viewers to walk through time while they observe documents from across the ages. The items were supplied through the university archives as well as donations from outside sources. The Lion’s Roar / Heather Jewell

Students with a curiosity like Indiana Jones for historical artifacts can satisfy their cravings by journeying to the Sims Memorial Library to view the newly featured exhibit.

“History Revealed through Rare Books and Documents: The Emergence of Printing, Bookbinding, and the Challenges of War Time Publishing” boasts multiple documents, including Civil War era newspapers, letters to presidents, books about foreign kings, religion, law and even Scottish histories.

Center director for Southeastern Louisiana Studies Samuel Hyde claims his own favorite pieces are the copies of “The Daily Wanderer” newspaper.

“By the end of the war they were the sizes of peoples’ hands,” said Hyde. “You get a mindset for how people in our area were in war. The press was constantly moving between Amite and Covington to be published and stay out of the hands of the Union.”

The idea for the exhibit has been brewing for a while; in the beginning, it was just to display rare Confederate newspapers together, but when they began to network, it evolved to encompass more things.

The items displayed belong to not only the university’s own archives, but were also donated by former English professor Paul Crawford, retired appeals court Judge Jimmy Kuhn and the Cate/Graham family.

According to Hyde, over time the Center for Southeast Louisiana Studies became acquaintances with various sources when they came to verify the authenticity of what they may have, which allowed them to make a list of who to ask for pieces.

“We keep a working file of everything,” said Hyde. “We were lucky that Kuhn and Crawford both wanted to participate. We had other sources, but they [Kuhn and Crawford] had so much and space was filled up quickly.”

Another part of the exhibit allows visitors to touch examples of what the fabrics of the different documents would feel like, while browsing through the early construction of books and multiple papers in the printing process.

“It was all the students,” said Hyde on the work of the staff: graduate research assistants Nicholas Heyd and Chase Tomlin, graduate assistant Megan Arledge and senior psychology major Faith Allen. “A lot of the final product came from the students themselves.”

Hyde took charge in the construction of the exhibit, however, everyone put in their own two cents throughout. According to Hyde, there has been a lot of success in the past, putting students in charge of curating such events. He believes it takes students to a different skill level, and that making them do everything themselves is an important learning tool.

“It gets them work ready and is a great exercise in student learning,” said Hyde. “It will instill the love of history and the written word in them. It lets them know if they want to do this for the rest of their lives.”

Hyde’s own love of history and time is what brings him back to the university archives.

“The archives are what I do, I’ve devoted my life to the study of the region,” said Hyde. “Each day I walk into the center it’s like a kid walking into Disneyland. I believe we are the most overlooked region and I’m giddy as I sit there every day.”

Hyde feels that students will get a lot out of the archives also, maybe not to the same degree as he, but something nonetheless as they walk through the progression of the published and printed word.