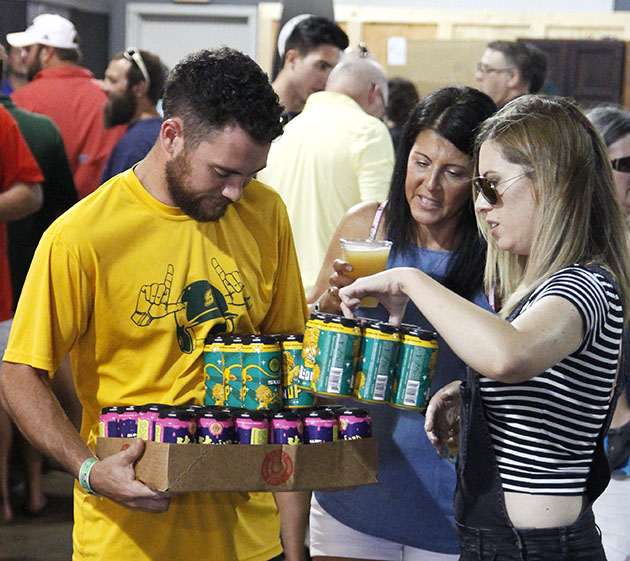 Gnarly Barley Brewing Co. is donating some of their proceeds to help the university combat alcohol abuse that occurs on campus. file photo/The Lion’s Roar

After partnering with the university to produce a university-affiliated beer, Gnarly Barley Brewing Co. has decided to donate a portion of the proceeds to alcohol abuse prevention efforts on campus.

“A couple of years ago, the idea of making a beer for our alma mater came up, and it just made sense,” said Cari Caramonta, co-owner of Gnarly Barley. “We wanted our Southeastern to have a beer just like some of the other universities in the state do.”

Annette Newton-Baldwin, a licensed mental health counselor at the University Counseling Center expresses the importance of not allowing alcohol to affect your studies.

“While most will say that alcohol use is very much a part of college life, students must know that you don’t have to ‘hit bottom’ or lose your college career due to alcohol,” said Newton-Baldwin. “It is OK to seek help early on before consequences of use destroy your college career and your relationships. There are many students who sought a life of serenity by choosing recovery.”

Caramonta feels the decision to donate to this cause was a natural one.

“We feel strongly about responsible consumption as a craft brewery,” said Caramonta. “Craft beer is an extension of culinary arts and is something to be appreciated and not something to abuse. We are active alumni, and Southeastern is a huge part of our lives. The idea came about organically after multiple conversations with other alumni and faculty that we see on a regular basis.”

Newton-Baldwin warns against impaired decision making while under the influence of alcohol.

“While some students have very little experience with alcohol and may not know their own limits, some students start their college career with maladaptive drinking patterns,” said Newton-Baldwin. “Students may not understand the connection between alcohol consumption and crime. While under the influence of alcohol, students are not only much more likely to commit crimes and to violate school policies, they are also more likely to be victimized. Alcohol poisoning is real. It’s easy to mix up someone who is ‘asleep’ with someone who is ‘unconscious’ from alcohol. The National Institute on Alcohol Abuse and Alcoholism reports about 1,825 college students between the ages of 18 and 24 die a year from alcohol-related unintentional injuries including motor vehicle crashes.”

Gnarly Barley donated to the program in hopes it will promote responsible consumption of their craft beer.

“We want people to enjoy our beer responsibly and not harm themselves or others,” said Caramonta. “We hope the funds will be used wisely in order to promote a healthy appreciation of alcohol and guide students to make smart decisions. We are donating to the program and allowing them to make the decision on how the fund will best be used.”

Newton-Baldwin discusses some of the alcohol prevention efforts of the university.

Newton-Baldwin defines alcoholism as a relationship between a person and alcohol that can be considered pathological for the following reasons.

“The person continues to focus on rewarding experiences with alcohol despite consequences of use to work, school, family, relationships, spiritual, financial, medical problems caused,” said Newton-Baldwin. “Alcoholism may force someone to put use before his or her typical interests and priorities leading to life unmanageability. Overtime, a person may create a defense system to protect their use of alcohol, which includes rationalizing, minimizing, denial and intellectualizing. The likelihood of alcoholism can be increased by genetic factors as well as the earlier one, started drinking, before the age of 21.”

The UCC offers help to students who may be struggling with alcoholism or poor alcohol consumption habits.