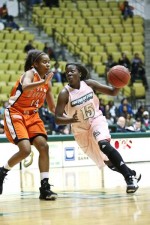 The Lady Lions came out intense and jumped out to a quick lead to begin the game. The game saw its first tie at 12-12 with 12:17 left in the half, but the Lady Lions answered the challenge with consecutive buckets from guards Latoria Holder and a 3-pointer by Jessica Sommers to regain the lead.

“In the first half we executed offensively, took better shots and got good looks at the basket. We shot 40 percent from the field,” said Head Coach Lori Davis Jones. After the honoring of former Lady Lions players and staff, the current Lady Lions were set for the second half of play.

The Lady Lions picked up where they left off the first half.  Hix knocked down another 3-pointer and increased the Lady Lions lead to 10. With 16:27 left to play, the Lady Lions saw their once 10 point lead diminish as the Lady Bearkats closed the gap 35-32.

“They had to get pretty aggressive being down 10 and we didn’t handle the press well,” said Davis Jones.

The Lady Lions refused to let up as guard Amber Crenshaw hit consecutive 3-pointers to increase the Lady Lions lead 41-32. Crenshaw was a spark for the Lady Lions as she contributed eight points off the bench in just 12 minutes of play. The    Lady Lions seemed to be in control of the night, but the Lady Bearkats had other plans. The Lady Bearkats went on an 8-0 run to tie the game 41-41 nearly halfway through the second half.

“They had to make a run. That’s the way you get back in and we weren’t able to handle it,” said Davis Jones.