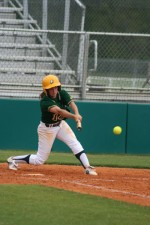 This past Sunday, March 27, the Lady Lion softball team, (14-15), clinched a series sweep at home, beating Southland Conference opponent University of Central Arkansas (UCA), (12-19). This is their first series sweep since 2008 and helps the Lady Lions surpass their 2010 conference and overall win totals.

The first game on Saturday saw Southeastern down by one in the bottom of the first inning. With bases loaded, junior Meghan Gomez hit a grounder towards third that was overthrown to first base, allowing two runners to score. Behind 2-1, UCA loaded the bases with no outs at the top of the second. Southeastern was able to hold off the charge and retire the side to maintain the lead.

In the bottom of the fifth, junior Katie Matthews’ home run to left field put the Lions up 4-1. Sophomore pitcher Kati Morse sat the Bear’s down in order in the seventh to secure the win, her third of the season, 4-2.

Jessie Browne sat down the first 10 batters faced, helping the Lions gain momentum in the start of Saturday’s night game. In the bottom of the fourth, Southeastern loaded the bases, only to strand all three runners. Once again in the bottom of the sixth, the Lady Lions loaded the bases. UCA pitcher Kelsie Armstrong hit junior Lauren Coniglio, forcing in the game winning run. Browne then sat down the order in the top of the seventh to close the game 1-0.

In Sunday’s rubber game, energy did not pick up until the bottom of the fifth with a solo home run to left field by sophomore Kelsey Nichols, tying the game at two. The bottom of the seventh was the most eventful inning of the series, when UCA, leading 4-2, changed pitchers twice, once after a single by Megan McCollum and again after walking Katie Duhe. With the bases loaded, Matthews smashed a grand slam over the left field fence to give the Lions their fifth straight victory at home.

In regards to her grand slam, Matthews said that it was “Amazing!” and that, “As soon as I hit it, I knew it was going over.”

Southeastern will host LSU in a non-conference home game starting tonight, March 29, at 6 p.m. The general consensus amongst the team is that they are excited to host the ranked LSU softball team.

“If we can keep this momentum, maybe we can have a really good showing Tuesday night against them,” said Head coach, Pete Langlois.

Athletic Director Bart Bellairs would like to remind students about the cash incentive to attend home sporting events. Each time a student swipes their school ID at a home sporting event, they will be entered in a chance to win $500. The prize will be awarded to one student just before spring break. Students’ names will be entered in the drawing once for each home game they attend.