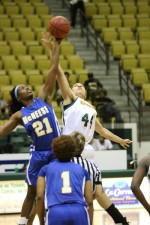 In their final home stand of the season the Lady Lions entered the Wednesday night match against the Conference leading McNeese State Cowgirls with hopes of keeping their SLC tournament hopes alive.

Seniors Rashima Jenkins, Rachel Mackie, Mary Fountain and Chelsea Hix were four of the ladies honored prior to the game for their hard work as Lady Lions playing in their final game in the University Center. In a tough effort the Lady Lions fell to the Cowgirls 68-61.

Full of emotion the Lady Lions got out to a quick start as senior guard Chelsea Hix opened the game with one of her four three-point field goals of the night. The Lady Lions continued to run as they led 8-0 at the 16:22 mark after a layup by senior center Rachel Mackie.

“We felt like all of our quicks were working. We got a good shot on just about everything we called,” said Lady Lions Head Coach Lori Davis Jones.

Out of a timeout, the Cowgirls came out firing and had closed the once eight-point lead to 12-11 midway through the first period; thanks to a three-pointer by guard Caitlyn Baggett, who led all scorers with 26 points on the night. With the first half of play coming to an end the Lady Lions increased their lead by as much six, but went into the locker room up 28-24 with another half  remaining.

“We only had five turnovers in the first half and the turnovers down the stretch were crucial,” said Davis Jones.

As the second half got underway the Lady Lions fought to keep their lead but lost it at the 18:03 mark when a jumper by Caitlyn Baggett tied the score 28-28. With the Cowgirls consistent shots the Lady Lions had to do the same, and did just that as Kelli Jenkins, who led the Lady Lions with 19 points, hit a mid-range jumper giving the Lady Lions a 38-33 lead with 15:17 remaining. Continuing to score, the Cowgirls would tie the score twice more before Ashlyn Baggett drove in for a layup giving her squad a 47-45 lead with 9:25 left to play.

“I felt like we didn’t play with the urgency down the stretch. It’s almost like we played a little bit tight and afraid to not lose as opposed to going after it and getting the win,” said Davis Jones.