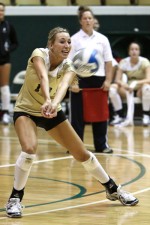 The Lady Lions defeated the McNeese State Cowgirls in five sets on Thursday, Sept. 23, at the University Center.

Setter Lindsey Young and Cruckshank are currently ranked 10th and 11th respectively in assists among the Southland Conference (SLC). The Lady Lions improve to 1-1 in conference play and 9-9 overall.

“We’re ecstatic,” said Allison Jones, senior outside hitter. “Right now though, we’re just trying to take everything in stride, and we’re going to really keep focusing on the things we need to work on.”

With Thursday’s win, the Lady Lions are now 3-0 when a match goes to five sets.

“We’re taking it a game at a time,” said Jones. “There’s still quite a bit of volleyball left to be played, and we’re just preparing for every game in practice. We’re really just doing our best to face the challenge in front of us.”

“After the third set, [head coach Julie Langford] really talked about how we need to step up our game,” said Jones. “But through it all, she was very positive, and we took her constructive criticism and built upon it.”

The team displayed this effort fully, coming out in the fifth set to gain the lead, which was never lost, to roll up their ninth win of the season.

The win puts an end to a three-game skid by the Lady Lions, who lost all three matches in the Nicholls State Tournament, against Nicholls, Louisiana Tech and Houston.