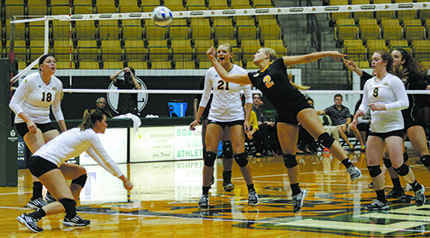 The Lion’s Roar / Morgan Ledet Morgon Todd  and Parrie Hartley attempt to return the ball back to Southern Mississippi University. The Lady Lions put on a valiant effort to defend their home court, but the Golden Eagles were just too much for the home team.

Lady Lions volleyball played a hard-fought match, forcing a fourth set on opponent Southern Miss at   Tuesday night’s game in the University Center. This is the seventh loss in a row for the Lady Lions. Southeastern fell short with a score of 25-19, 25-17, 25-27 and 25-19. The standout players were Sarah Friedman, Lindsay Grace, Parrie Hartley, Morgan Miller, Mikayla Shippy and Morgan Todd.

Hartley led the Lions with 12 kills with a .211 attack percentage. She also had a double-double with 13 digs. Shippy gave out 18 assists while Miller added an additional 15 for the Lady Lions. Todd also led the team with 18 digs.

After losing in the first two sets, the Lady Lions made a comeback during the third set. The team made a strong lead after an 8-point deficit and won. head coach Jim Smoot made late substitutions with Friedman and Grace, which proved to be a great call during the final moments of the third.

“In our third game we played so well with each other and we won,” said Todd. “That’s how we should play all the time.”

“I just wanted to go in and make a difference whether it was getting energy up or even just killing a ball or really just improve the team,” said Friedman.

The Lady Lions have a record of 2-9 for the season.

The Lady Lions open the Southland Conference play a week from Tuesday at the University of New Orleans.

In Tuesday’s game, outside hitter Tiffany Thomas had seven kills and three blocks. Outside hitter Elizabeth Ramee and middle blocker Veronica Turk both had six kills, Turk also contributed two blocks. As a total, the team had 38 kills, two aces and six blocks.

For more information go to lionsports.net.