Defense shines in victory over Northwestern 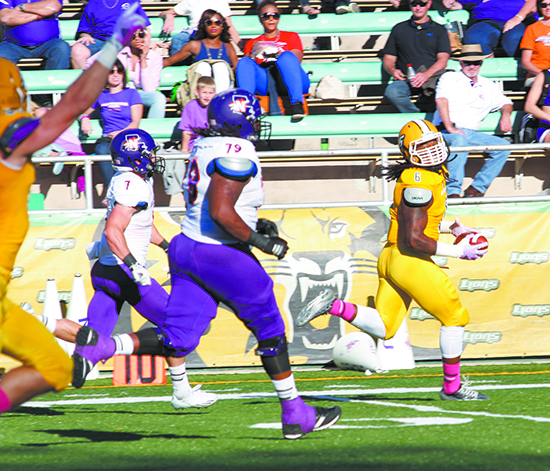 The Lion’s Roar / Megan Ferrando Senior Linebacker Isiah Corbett continued to lead the potend Lions defense. The Florida native secured an interception and returned it all the way for a touchdown in the third quarter.

After 11 consecutive wins in the Southland Conference, the Lions football team returned home for the SLC home opener game against Northwestern.

With the start of the game, the Demons won the coin toss and deferred to second half.

Both teams fought to gain momentum in the first quarter, but no points were on the scoreboard at the start of the second quarter.

The first big play was when NSU’s pass by Zach Adkins was intercepted by Denzel Thompson at the Southeastern 15 yard line leading to Thompson returning 51 yards.

Thompson once again was able to gain control of the game, when Chris Moore of NSU had his field goal attempt blocked by Southeastern’s Ashton Henderson and recovered by Thompson.

Thompson received advice from his teammate and roommate, Xavier Roberson, before the start of the game.

“Before the game started, I gave him a talk and told him to be a ball-hog,” said Roberson. “The most important thing in the game of football is the ball, and that is what he did. He came out today and he played.”

With just over a minute left in the second quarter, Adams made a 55 yard field goal making it the longest field goal in school history. He drove the football three yards longer than Jeff Turner, who previously held the record of 52 yards.

One of the reasons Adams was able to make his field goal was from weekly practices.

“It all goes into preparation,” said Adams. “Just doing the same thing week-in and week-out is a big thing for me. I try to fix my mistakes and this year I focused on consistency.”

Alex Herbert started off the second quarter by punting to Northwestern and early in the third quarter Isiah Corbett snatched and ran 44 yards scoring the first touchdown of the game bringing the score to 13-0.

Not only was this the first touchdown of the game, but also it was the first time that Corbett scored a touchdown while playing for Southeastern.

“[Scoring the touchdown] feels great,” said Corbett. “I had an opportunity to score last year, and I got caught from behind. I just kept thinking to keep running, keep running. I got to the end zone. I was just happy.”

After six plays between NSU and Southeastern, Southeastern was deep enough in the Demon’s territory for Adams to score a field goal bringing the score to 16-0 with 8:54 left in the game.

Three minutes left in the second quarter, Adkins made a touchdown for NSU after 16 plays and a 75-yard drive. The Demon’s Adkins passed to Bryant Mitchell making the two point conversion good and bringing the score to 16-8 with 2:59 left.

After Moore received a penalty for illegal kicking, he once again punted the ball in which Roberson answered to by rolling 79 yards to Northwestern’s seven yard line.

On the first drive of the fourth quarter, Bryan Bennett was able to pass to Devante Scott who dove into the end zone. Southeastern’s field goal was good bringing the score to 30-8 with 12:24 of game play left.

Northwestern would not give up though, and Garrett Atzenweiler would score on both of NSU’s two drives bringing the score to 30-22 with 2:47 left.

With what seemed like a win early in the game, Southeastern’s defense was ready to go back on the field to defend against NSU and stay ahead on the scoreboard.

Southeastern will once again see action on the road next Saturday against Lamar at 6 p.m. To find out more information about the football season or to find a way to watch and listen to the game, visit lionsports.net. 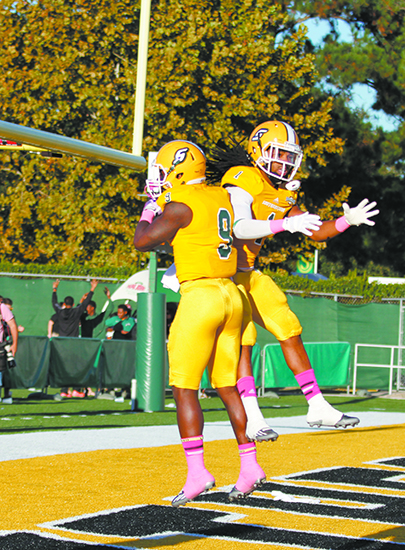 The Lion’s Roar / Tamara Alexander Denzil Thompson and Harlan Miller celebrate in the endzone. The Lion secondary played a large role in the Southeastern's victory. Thompson had two interceptions while the team would end with four picks by the end of the game.