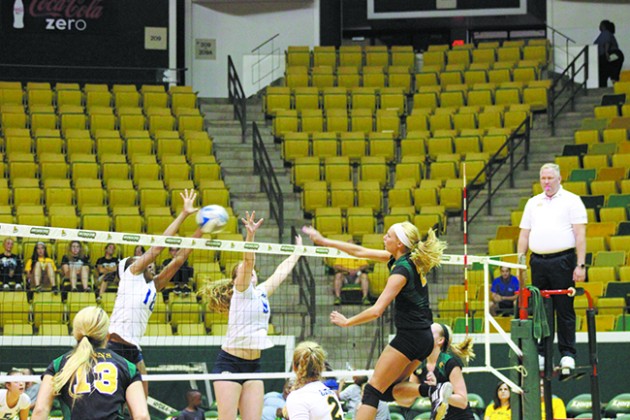 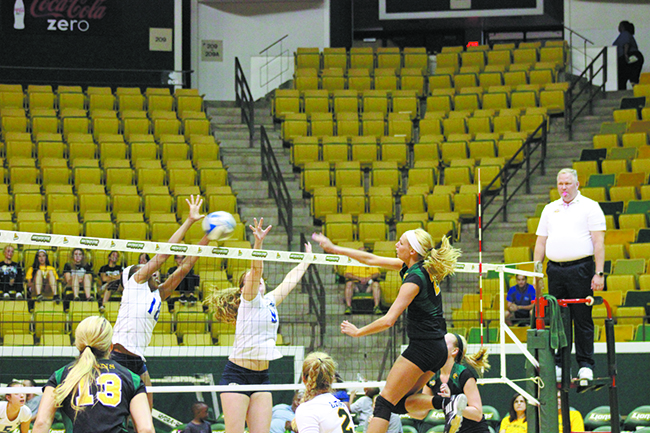 The Lion’s Roar / Maria Goddard Junior Veronica Turk spikes the ball back at the Lady Privateers of UNO. Turk finished with four kills, one block and an assist. The victory brought the Lady Lions to 4-2 overall in conference

The Lady Lions volleyball team defeated the UNO Privateers over the weekend, achieving their best start in the Southland Conference in over 10 years. The game was won in three quick sets, 25-19, 25-13, 28-26.

The game was held in the University Center on Saturday and was the second victory last week. On Tuesday, Oct. 7, Southeastern won against McNeese State University, 19-25, 25-16, 25-21, 25-17, a previous Southland Conference home game.

For the overall season, the Lady Lions have seven wins and 11 losses. To date, they have won four and lost two matches in conference.

During the last set against UNO, the Lady Lions were off to a rough start. They regained their momentum and were able to score the close, two-point victory.

“It’s great to get a conference win,” said head coach Jim Smoot. “I’m a little concerned that we started off so slow in the first game. It’s something that we need to work on, but once we got playing, got the flow going, I was very pleased with our overall performance.”

Leaders in the game were Sarah Friedman, freshman middle blocker with 10 kills and one block, Morgan Todd, junior defensive specialist with 27 digs and Morgan Miller, sophomore setter with 22 assists.

Mikayla Shippy, a junior setter, was not far behind Miller with 21 assists herself.

“Morgan did a great job when she ran in there. Both her and Sarah played really well. I thought they both did excellent when we subbed them in,” said Smoot.

The hitting attack percentage was .224, with a grand total of 51 kills.

Although some players stood out more than others, Friedman credits the whole team’s group efforts.

“I think the support of the teammates really inspires you to want to do better,” said Friedman. “Everyone cheering for you really helps. I could not have done it without the sets, though or the passes. It was really a team effort.”

Miller was another key player who felt optimistic about the win.

“I think the chemistry with the girls on the court was much better today, especially in the last game when we got in a sticky situation and the game got a little tighter,” said Miller. “I felt like we all worked together even better and I think that was an improvement in the game.”

Miller was also ecstatic about the support from family and Lions fans in attendance.

“My dad was here,” said Miller. “He comes to all the games and gets so excited. Everybody wants to see you succeed.”

One fan who enjoys supporting the success of the team is Geron Persaud, a freshman engineering technology major.

“It went awesome. At first, it was good and they were rolling, and then it got tense in the last set. [It was] point-for-point,” said Persaud. “It’s good to be part of a big university that wins Conference games.”

Smoot plans to learn how to help in working towards the Southland Conference Tournament from these games.

“I think it is key for us to get quick starts each and every match and not wait until we’re down four or five points before we start playing at the best of our ability,” said Smoot. “Our major goal is to make the Southland Conference Tournament and we had a very tough preseason, had several losses, but that doesn’t really affect the goal to make the conference tournament.”

With another win under their belts, the Lady Lions will continue to work toward their goals.

“They are fun to work with and do have their priorities straight, athletics and academics,” said Smoot. “The girls realize what it’s going to take to get there and they are a great group.” 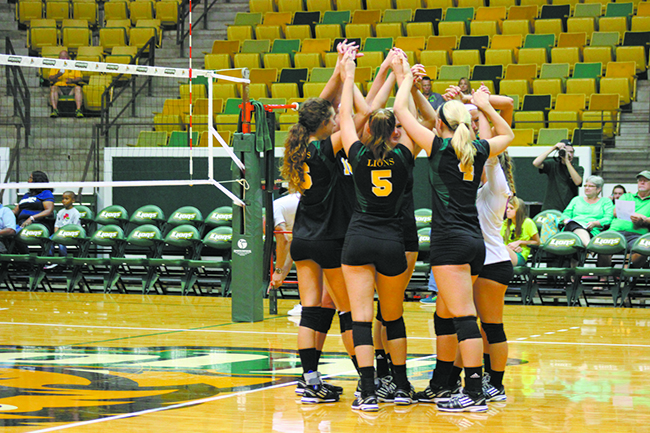 The Lion’s Roar / Maria Goddard The Lady Lions celebrate in the middle of the court following their win over UNO. Southeastern volleyball will be back in action against Stephen F. Austin University on Oct. 23