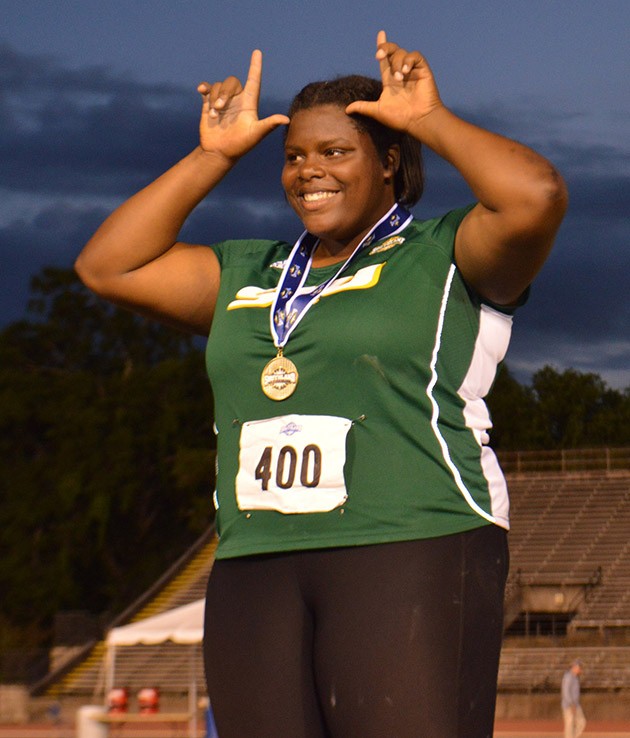 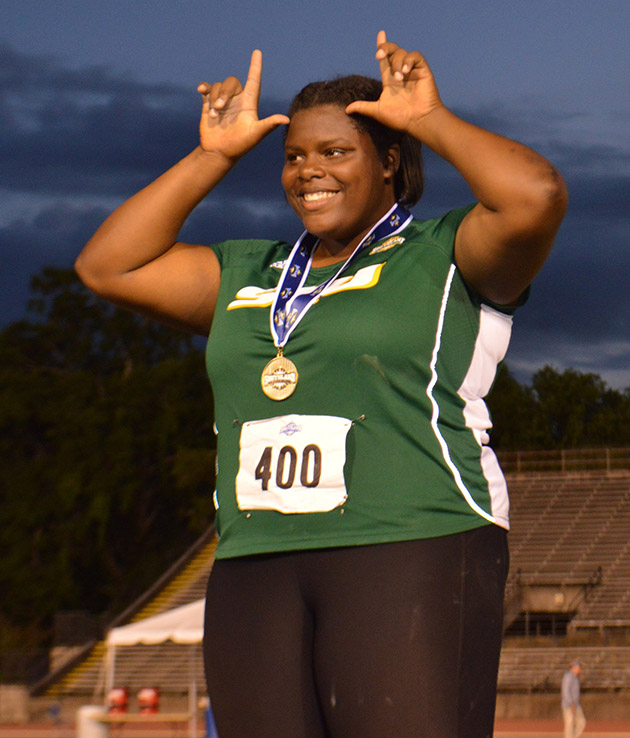 Sophomore thrower Ashley Davis was awarded the 2016-17 Southeastern Female Athlete of the Year for her outstanding freshman season. The award in the men’s category was given to Alex Young.  Courtesy of Sports Information

Ashley Davis was recently recognized as the Southeastern Female Athlete of the Year for her outstanding performance in the throws.

Davis shares the moment she realized she was receiving the honor.

“I think that is fantastic,” said Nikfar. “It’s a wonderful achievement to have as a freshman. It’s a nice way to showcase the track and field team and is also very deserved. I think that she has exceeded expectations in her first year. She has a lot more potential to go further.”

The efforts of the student-athletes have been recognized by the university since 1990-91. A panel of university head coaches and administrative athletic staff vote on the winners, and this is the first time where both male and female winners came from the track and field program.

Davis is reaping the rewards of her training. Davis winning the award was only the fourth instance a  Lady Lion track student-athlete was Southeastern Female Athlete of the Year and the first since 2000-01. She regards this honor as a result of her training and her coach’s support.

“The training here can be challenging at some times for me, but it’s meant to be hard and challenging so we can get better,” said Davis. “The coaches here are great. They want us to succeed on both sides. What I meant about that is they want us to train our best and do great in school while we train our best. They have helped me shape my performance by challenging me to do new things.”

Davis also talks about her time at the university.

“My journey has been incredible at Southeastern track and field so far,” said Davis. “Before I came to Southeastern on my official visit there, the coaches would tell me that if you come here you would be throwing 50 feet in my freshmen year. Well, when I finally hit that 50 feet mark at the Southland indoor conference, I was so excited that I couldn’t wait for outdoor season. I surprised myself when I threw 53 feet, 7 inches at Ole Miss. I knew that I could throw past 50 feet but not that far. I was in complete shock. I can’t wait to see how my journey will turn out to be this year.”

Davis goes on to explain her life as a student-athlete.

“My life as a student-athlete can be hard at times because I’m focused on training and school,” said Davis. “I really don’t have time for anything else because when I’m done with practice and lifting, I go hit the books because training takes up half of my day and school takes up the other half.”

Despite a rewarding freshman year, Davis still needs to enhance her game.

“The biggest thing is time on a task,” said Nikfar. “Ashley is a first year rotational shot putter. So, she came to us as a glide shot putter. We changed her technique, so just being able to spend more time practicing the new technique is the biggest thing she needs to do and just get better at it.”

Davis is looking forward to the next track and field season and shares her plan for it.

“My current plans for this season for shot put is to reach 17.40 meters,” said Davis. “I think I can do it if I just work really hard and focus on my technique for the spin. It will take a lot of work, but I’m willing to put in the hard work every day. I’m also going to take some time and work with hammer and discus. I know hammer and discus isn’t my main sport, but it would really be nice to also be good in those events too.”

Davis wants to repeat her freshman season and wants to do better than what she did in the past year. She also expressed her career goals as well as touched on how a recognition like this motivates her. She was recently named second-team All-Southland Conference in the shot put.

“Well knowing what I have accomplish my freshman year in college, I know that I have a lot to give this season because I was just starting to get the rational turn at the ending of my freshmen season,” said Davis. “My main goal is to at least try to make it on the USA track and field team. I always had this version on me trying to make it to the Olympics completing with the best. Being recognized like this motivates me a lot because people get to read about what I do and what I’m capable of.”