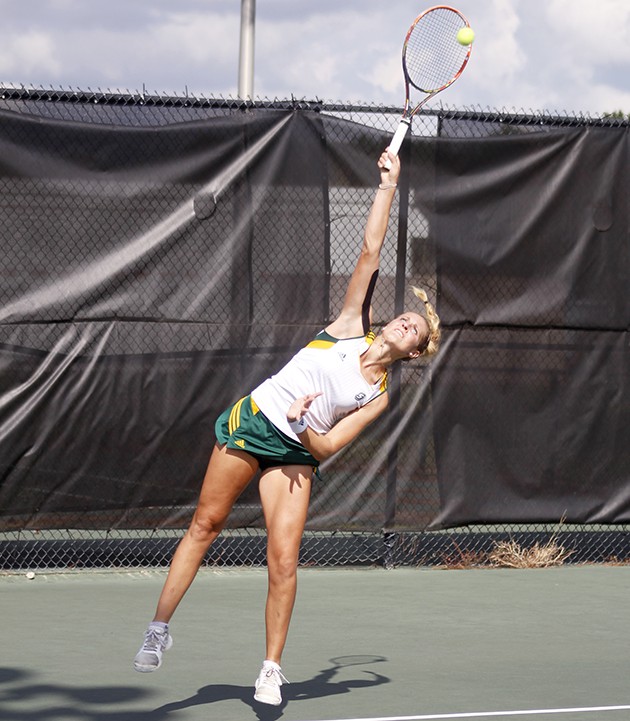 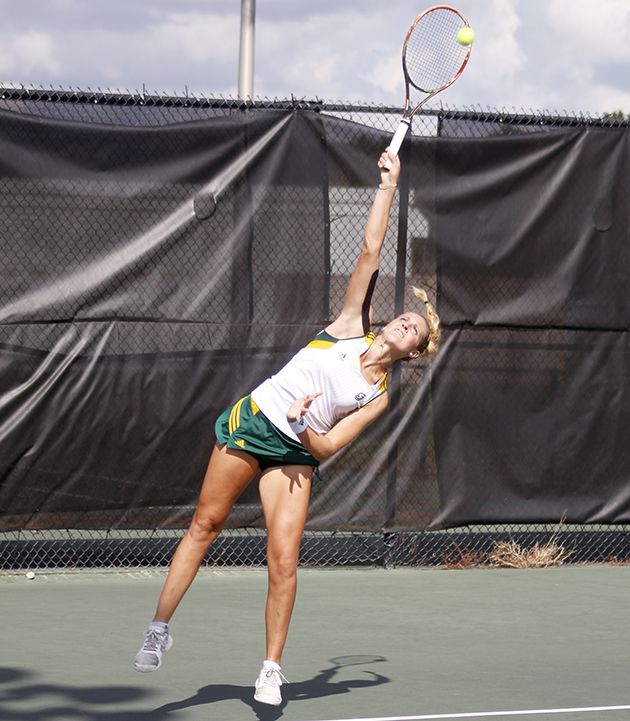 Senior Fleur Holtkamp serves in the match against University of Louisiana at Lafayette. She won three of her four matches in the George E. Fourmaux Fed Cup Invitational. Nikisun Shrestha/The Lion's Roar

With the end of the George E. Fourmaux Fed Cup Invitational, the Lady Lions tennis team ended their fall season at home. The team finished the invitational fourth with two wins and two losses.

Head Coach Jason Hayes shared his thoughts on the team’s performance during the tournament.

“Really good performance by the girls this weekend,” said Hayes. “Everyone is focused on what we were trying to do. We just lost two good programs, but we are focused on our future.”

Senior Fleur Holtkamp described her personal as well as the team’s performance during the weekend.

“We played over three days, and we played four matches,” said Holtkamp. “I won three and lost one, that’s good overall. As a team, we worked really hard, we played some really good tennis. We lost some close matches. We won two good matches. So I think as we keep growing into the spring, it should be a really good season.”

“I was always really excited to come and play here at Southeastern,” said Yanez. “I wasn’t used to this atmosphere of having the girls cheer for you, having the coach at the court. That was a huge difference. I really enjoyed it. It really motivated me to see other athletes come here to cheer the team. It just keeps you positive throughout the match.”

On the final day of the tournament, the Lady Lions competed against the University of New Orleans for the third spot. However, UNO managed to edge past the Lions. Holtkamp talked about the game against UNO.

“There are always some tough matches,” said Holtkamp. “Today, I didn’t play good, but those days happen. There were just too many mistakes. But I worked hard and tried hard. The other girl played good, and things like that happen. You just got to forget about it and move on and keep working harder and harder to get better.”

Yanez also shared how she felt about her performance during the tournament.

“I’m satisfied with what I did,” said Yanez. “Of course, there is always room for improvement. Overall, I’m really happy specially with my mental performance, but there are definitely some things that I need to work over this time off.”

Yanez went on to explain the aspects of her game she wants to work on.

According to Hayes, the team has improved from their first outing in Cancun, Mexico to the recent home tournament.

“We have improved tremendously since Mexico,” said Hayes. “We’ve been working on being a little more aggressive, and the girls have really responded to this new style of play.We compete very hard. The team is also very coachable and wants to improve each time out. It’ll be important for us to focus on being as strong as we can mentally because of the difficult conference schedule.”

The overall fitness of the team was one of the standout aspects of the game that the team developed in the fall season.

“We’re all really strong in our fitness,” said Holtkamp. “We keep moving the ball around. We’re very steady. We’re all fighting hard. As a team, we’re getting closer in getting to know each other.”

Yanez also pointed out the team’s ability to fight for long periods of time.

“We’ve improved, specially physically,” said Yanez. “There’s been a huge difference how the girls have been able to grind out long matches, not show any signs of being exhausted or tired. Mentally we’re getting stronger. Overall, we’re on the right track.”

The team will start their spring season away at the University of Louisiana at Lafayette on Jan. 28. Hayes talked about how the team will prepare for the upcoming season.

“We are going to continue to work hard physically,” said Hayes. “It’s a long and difficult season, and we need to make sure that we are in the best physical shape ever. We’re looking forward to working hard and getting ready for the spring.”